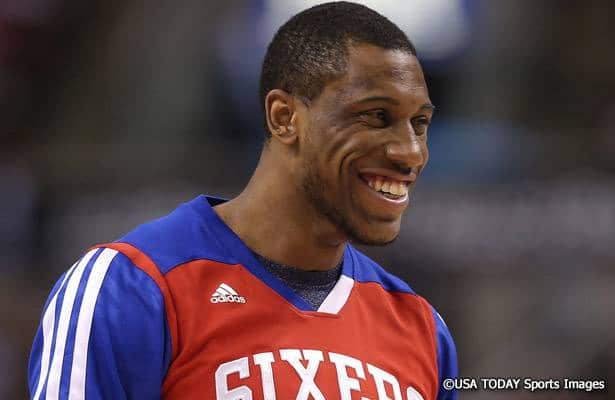 Thaddeus Young is the odd man out. He was the player left behind by the Sixers, who sent away Spencer Hawes, Evan Turner and Lavoy Allen Feb. 20 in trade deadline deals. Young has been told that the Sixers want him around as they rebuild the franchise. He is under contract through next season, during which he’ll earn $9.16 million. He also holds a player option for the 2015-16 season worth $9.72 million, which he could decline if he’d prefer to leave the Sixers in favor of signing with a contending team.

Via Christopher A. Vito of the Delaware County Daily Times

Young has been one of the few bright spots in this historically woeful season for the 76ers. He’s putting up 17.9 points, 6.1 rebounds and 2.3 assists a game. Now, that is a big byproduct of him playing in a primary role, whereas he’d be a second or third option on most teams – but there’s no reason to rush Young out the door at a bottom-dollar rate like they did with Evan Turner and Spencer Hawes at the deadline. Young’s a fine player, he’s just not a number one option. But, his contract does not limit their flexibility much and is good value considering what he is capable.

The 76ers are positioned to make quite the haul in the 2014 NBA Draft. The hope has always been that they’ll be able to walk away with a potential franchise player and at least another really promising rookie. They also have the No. 6 overall pick in last year’s draft in Nerlens Noel who we haven’t seen play yet. So, help is on the way, and Young could fit in

The Thunder has finally dodged an injury bullet.

After what initially looked to be a potentially serious knee injury on Friday night in Toronto, Russell Westbrook walked out of the arena fine, without a brace and telling the Oklahoman that he didn’t expect to miss any time.

And on Saturday, after an MRI and clinical exam with team doctors, that fortunate diagnosis was confirmed. No areas of concerned surface as a result of Westbrook’s knee-to-knee contact with Raptors guard Kyle Lowry.

The team is calling it a knee sprain. He isn’t expected to miss any additional time.

Via Anthony Slater of the Oklahoman

That collective sigh of relief you’re hearing is coming from the entire state of Oklahoma. With the amount of time he’s missed over the last year there’s going to be serious concern anytime he even looks at his knee funny. The play with Lowry looked particularly scary, though, so they have to feel fortunate that he’s not going to miss anytime. Finally, he catches a break.

It’s not like the team would have been lost without him. They’ve proven this season that they can be successful without him. However, they’re not a championship team without him. Their ceiling is significantly lower without him. Last year they couldn’t get out of the second round, so there are no misconceptions over whether they need him when it matters most. Winning in the regular season and the playoffs are two completely different animals. One is possible without Westbrook, the latter is not.

Hickson suffered the injury during the fourth quarter of Friday night’s game against the Dallas Mavericks.

A date for surgery is pending and he will miss the remainder of this season.

Hickson joined the Nuggets as a free agent last summer. In his first season in Denver, he averaged 11.8 points and 9.2 rebounds in 69 games (52 starts). Entering Saturday, his team-leading 26 double-doubles were tied for 20th in the NBA.

This is just par the course for the Nuggets this season as they’ve also been without JaVale McGee and Danilo Gallinari. A torn ACL is no longer the career-ender it was once thought to be before the advancements in medical treatment for it came along, but for a player like Hickson who relies heavily on his athleticism, it’s going to tough to deal with.

With McGee returning next year and Kenneth Faried playing much better since the trade deadline minutes are going to be harder to come by for Hickson, especially if he can’t get back on the court until midway through the season. The typical timetable for return from an ACL injury is 8-12 months, so midseason would be the best case scenario.