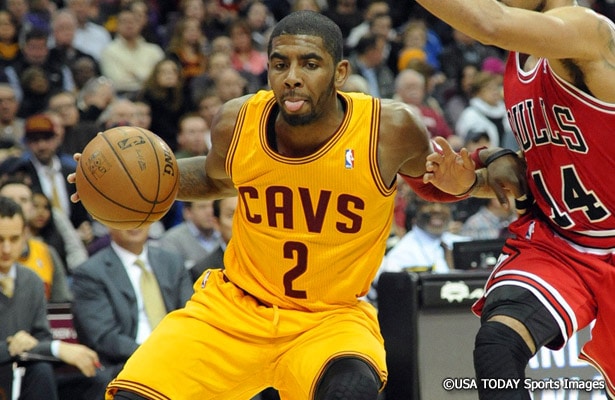 Kyrie Irving Wants Out From Cleveland?

And, as far as Kyrie, rumblings and stuff, with LeBron I would have let it go. Well I’m not going to let it go [now]. I’m going to talk about it and here’s the truth: The truth is [Kyrie’s] camp has been putting out there for years – years – that he doesn’t want to be in Cleveland. That they don’t want him in Cleveland. He doesn’t like Mike Brown. He didn’t like Chris Grant. He doesn’t like Dion Waiters. He’s already gotten a General Manager fired. He might get Mike Brown fired.

I’m just giving you my feel right now and my feel is that he’s not crazy about [signing the full max extension] unless he gets everything checked off across the board.

And the other thing is: if the Cavs ever dream of having LeBron, it’s not going to be with Kyrie there. LeBron and Kyrie have drifted apart in the last few years, even to the point that if the Cavs wanted to get LeBron they would maybe trade Kyrie for someone who would fit better with LeBron. And I’m not making that up. That line of thinking was not originated by me. That’s just the truth.

via ESPN’s Brian Windhorst at CavstheBlog.com

This is not the first time there have been discussions about Kyrie Irving wanting to leave Cleveland.

Irving is under contract for next season, when he’ll make $7,070,730, and then Cleveland will be able to extend a qualifying offer to make him a restricted free agent.  The Cavaliers are expected to offer Irving a max contract on July 1. If Irving doesn’t accept the offer, it’s possible the Cavaliers will make him available in trade discussions, according to Windhorst.

Irving could sign for the qualifying offer, which would allow him to become an unrestricted free agent following the 2015-16 season, but that’s very risky. Turning down a max contract for a $9,191,949 salary and the opportunity to test free agency isn’t a smart business move, especially considering Irving could get hurt and miss out on his chance to ink a lucrative deal.

Windhorst reports that Irving will look to use the contract negotiations as leverage to make changes, which may include removing head coach Mike Brown. The team already fired general manager Chris Grant earlier this season.

Irving took to Twitter to respond to this report: “Sick to my stomach with all these rumors and accusations. Can I play without media guessing at my life and putting B.S out for headlines. It brings nothing but negativity to the team and portraying me as something I’m not. I don’t want or need the attention, so it can stop now. At least be man or woman enough to come and ask me. There’s no such source as “Kyrie’s camp”, nothing but nonsense.”

It is not clear what will end up happening in Cleveland, but this rumor is not going away until Irving signs on the dotted line.

The NBA announced today that Larry Sanders of the Milwaukee Bucks has been suspended without pay for five games for violating the terms of the NBA/NBPA Anti-Drug Program. Sanders’ suspension will begin with the next NBA regular season game for which he is eligible and physically able to play.

This has been a rough year for Larry Sanders and the Milwaukee Bucks. It got worse on Friday when the NBA announced that Sanders has tested positive for marijuana use and will be suspended five games once he returns from injury next season.

Sanders released a statement regarding the suspension: “I apologize to the entire Bucks organization and our fans for being suspended five games for using marijuana in violation of the NBA Anti-Drug Program. I take full responsibility for my actions.”

The Bucks center received a four-year, $44 million contract extension on August 20, 2013, but has missed all but 23 games this season after tearing a ligament in his thumb during a nightclub altercation and suffering a fractured orbital bone in March. Sanders will serve his five-game suspension next year when he is ready to play.

Bucks fans hope Sanders will bounce back next year and team up with Giannis Antetokounmpo, Brandon Knight and the top prospect they will have from this year’s draft.

Nick Young Undecided on Future with the Lakers.

That’s because the Lakers have expected Young will opt out of his $1.2 million player option that will make him a free agent this offseason, leaving open the possibility he could attract more lucrative offers from other teams that the Lakers won’t match. Despite Young recently conceding to NBA.com that he believes he’s worth more than his current salary and that he would like for other teams to pursue him this offseason, his agent told this newspaper that it remains presumptuous whether his client will opt out of his contract.

via Mark Medina of the Los Angeles Daily News

After playing in Philadelphia on a one-year contract for $5,600,000, Nick Young signed with the Los Angeles Lakers for $1,106,942. Young took a steep discount to join the team he dreamed of playing for growing up.

Young has averaged 17.3 points, 1.4 assists and 2.6 rebounds while shooting 37.5 percent from beyond the arc this season and recently scored 40 points against the Portland Trail Blazers.

Young has a player option to stay in Los Angeles next season for $1,227,985. However, Young has proven himself to be worth a serious look from teams looking to add instant scoring.

The appeal to stay with the Lakers is strong, but Young will listen to teams that show interest in him this offseason. He’s due for a raise, but it remains to be seen who will give it to him.