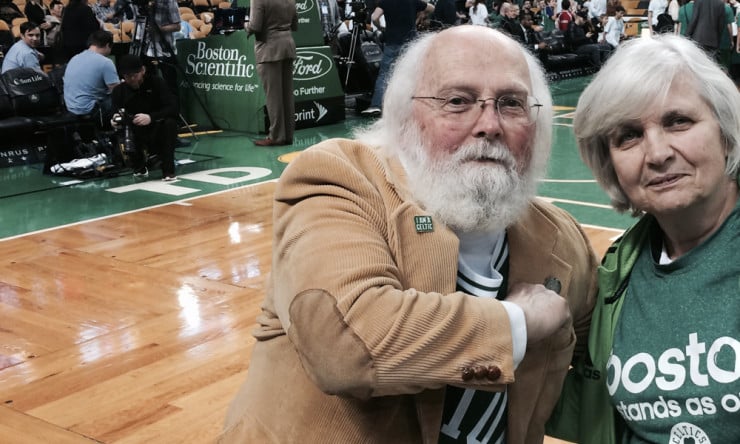 When the Boston Celtics head into Game 4 against the Cleveland Cavaliers on Sunday, they will have one advantage in spite of facing elimination: the homecourt crowd. Part of the 18,000-plus is a diehard fan who energizes the arena with a single motion. Each game, the Jumbotron captures him as he leaps out of his seat and passionately pounds on his chest as the arena erupts in cheers.

He refers to himself as, “Chest Pump Guy.”

Carl Lenhart has earned a bevvy of monikers since he began coming to games at TD Garden 10 years ago. From “Santa Claus Guy” to “Suit Coat Santa” to “The Professor,” these nicknames are used to describe the man with the white beard and glasses who dons his personal game day uniform – a maple corduroy blazer over a Celtics jersey.

To appreciate why Lenhart puts such thought into his attire and excitement into his movements, you have to go back to the 1950s. Lenhart grew up in Indianapolis while the Celtics were one of the best teams in basketball. As a young child, he was drawn to the talent.

“I’m probably 8, 10, seeing (Bob) Cousy, number 14, squeaky tennis shoes on the parquet floor and this guy’s my hero,” he told Basketball Insiders. “To me, the Celtics were the high point of America.”

Lenhart’s family relocated to Los Angeles. When the Lakers moved there as well he showed support for his new hometown team. But he remained a true Celtics fan at heart, a passion that was fueled when he returned to Indiana. During that time, Indiana native Larry Bird was playing for the Celtics and their games were aired on TV in his home state.

“That kept us in touch (with the Celtics),” Lenhart said.

It was Margot, Lenhart’s wife to whom he has been married 45 years, who wanted to move to Boston. She is from Germany and the city reminded her of Europe. She got a job at Tufts University, where she still works in fundraising, and Lenhart followed her to the East Coast. He teaches Greek and Latin at Barnstable High School.

Years after watching the team from afar on television, Lenhart experienced Celtics basketball in person.

“I finally get to come to a Celtics game and something happened,” he said. “I started seeing things, hearing things, feeling things like I’m a kid again. I’m getting younger as I come to these games and I go crazy.”

Lenhart’s first Jumbotron experience came during the 2007-08 season. As he watched others on the screen, he began to wonder what he would do if he was ever on camera. He wouldn’t dance, he decided, he wanted something more serious than that.

He looked for inspiration and found it in Kevin Garnett, who intensely pounded his chest and pointed to the crowd before every home game. When Lenhart’s moment came, he was ready.

“It all started for me really from Kevin Garnett with the chest pump,” he said. “To me, that meant all heart. It’s passion. You can’t always express that, but it all comes out. What an arena for this to happen. I sometimes feel it’s a cathedral because KG did the rituals, he went through all his little maneuvers, and it was sacred. … I said if I get on there, I’m going to imitate KG. That’s what I did and everybody went bonkers.”

Lenhart has become a fixture of Celtics in-game entertainment. He attends every game with Margot, who often pokes him to let him know he’s on camera and then tries to get out of the way.

He has emerged into a fan favorite far beyond Boston. Lenhart was recognized in Europe and has been told by people from France and Australia he is a part of fan clubs overseas. The Celtics organization even made a video montage to celebrate his birthday this year.

The players have taken notice, too. This season he received a handshake from Jared Sullinger and a fist pump from assistant coach Walter McCarty. Years ago, Nate Robinson introduced himself and gave Lenhart a hug while he was watching shootaround.

Lenhart currently has four jerseys in his collection: Garnett, Paul Pierce, Kelly Olynyk and John Havlicek. He would like to add his childhood favorite Cousy to the group. Whichever jersey he is wearing, whatever nickname he is called, Lenhart thrives on being part of the Celtics experience.

They have always been part of his.