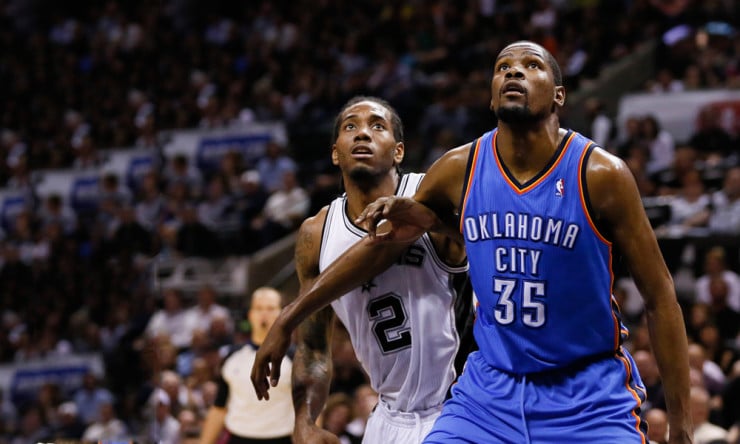 As we move closer to the February trade deadline, now is a good time to look at the upcoming free agent class set to hit the market in July. From franchise players like Kevin Durant and LeBron James, to All-Star caliber players like Mike Conley and DeMar DeRozan, to up-and-coming players like Hassan Whiteside and Harrison Barnes, this free agent class has some notable talent (though it lacks overall depth).

Here is a look at the top 10 free agents set to hit the market this summer:

There are players who come along but once every so often: Tim Duncan and LeBron James are among them, and maybe, if he’s lucky, Kevin Durant can one day be listed in that class.

In the summer of 1996, Jerry West was fortunate enough—or, depending on how you look at it, smart enough—to get his hands on one such player: Kobe Bryant.

A full 20 years later, as Bryant is wrapping up a career with accolades a bit too numerous to list, he does so after putting forth arguably the greatest career that a generation of NBA fans have witnessed to date. And when he looks back at his storied career, yes, he may have done things a little differently. He may have tried to better understand, earlier, that winning basketball is not all about what transpires between the lines on the basketball court, but that it is just as much about what transpires between one’s ears. And yes, he may have tried harder to work things out with Shaquille O’Neal and Phil Jackson. But that’s all water under the bridge now.

The Brooklyn Nets followed through yesterday on what seemed an inevitability. Head coach Lionel Hollins was fired and long-time general manager Billy King was re-assigned within the organization.

Hollins’ fit in Brooklyn was suspect at best and despite having one more year remaining on his deal, he was let go. Hollins will be replaced by assistant coach Tony Brown, who will serve as interim head coach.

The decision to fire Hollins at this point in a lost season seems somewhat odd, but the team was not responding to Hollins and was going nowhere quickly. The belief around the team is that a change in voice and coaching style might help the team compete a little more and ultimately create room for some of the younger players the Nets took a flyer on in free agency to get more playing time.

One of the most interesting teams in the NBA over the past few seasons has been the Washington Wizards. They seem to be a team that could be a surprise in a number of different ways. Given how much talent they have, it seemed foolish to discount them as a contender in the Eastern Conference heading into this season.

Last season during the playoffs, the Wizards swept the Toronto Raptors in four games during the first round. The sweep came as a bit of a surprise considering how the Raptors won all three of the team’s regular season matchups.

The NBA’s middle and bottom tiers often aren’t as glamorous as one might like to believe. Paupers they aren’t, but the ratio of struggle to compensation for guys in the league’s proletariat typically pales in comparison to their star counterparts. This is especially true for those on the margins, competing for roster spots and minimum salary guarantees – the cut potential is high, the reward for success is (relatively) low, and the job stakes are sky high given how far the financial benefits fall off a cliff for those who fall short.

Guys can fall through the cracks easily during this process. After all, with limited time available in training camps and preseason play to determine who deserves end-of-bench slots and hundreds of other things on the minds of coaches and team brass, a couple ill-timed, uncharacteristic mistakes could mean the difference between a contract and a tour back around the D-League.

Who Should Make A Deal in East?

With the NBA trade deadline (February 18) less than six weeks away, you can expect chatter to start heating up shortly – even if talks of deals have been rather quiet up until this point. One of the questions that arise each year is should contenders make a move at the expense of team chemistry?

As we approach the halfway point of the season, weaknesses for each unit have emerged. But the question remains, do you tinker with team chemistry by bringing in new parts or do you let things play out?

Let’s take a look at the top five teams from the Eastern Conference, as of January 13, and evaluate if moves need to be made before the deadline (for the Western Conference teams, click here).

In August, shortly after putting pen to paper, the big man told me that he wanted to finish his career in Portland. Now, halfway through his stint with the Blazers, he remains pleased with his situation. It has been everything he hoped for and he isn’t regretting his decision one bit.

“It’s been an easy transition for me, especially after bouncing around a little bit in the past,” Davis told Basketball Insiders recently. “There are a lot of other guys here who are also in their first year on this team, so that makes it easier too because we’re all in the same position. It’s a great organization and Coach [Terry] Stotts is probably the coolest coach who I’ve played for in my whole life. [The transition] has just been so easy.”

Who May Be the Next Ben Simmons?

Top draft prospect Ben Simmons of LSU is garnering a lot of attention due to his eye-popping collegiate numbers, and he’s almost guaranteed to make him the top overall selection of the 2016 NBA Draft. The 19-year-old impacts just about every facet of the game and he’s currently averaging 20.3 points, 12.6 rebounds, 5.3 assists, 1.9 steals and 1.2 blocks. The wonder from down under is drawing early comparisons to LeBron James for his versatility and unselfish style of play, and executives from potential lottery teams are already drooling over the possibility of nabbing the burgeoning star.

While it may be a little early, the good people at McDonald’s recently released a long list of 2016 McDonald’s All-American nominees and, as we know, many of the NBA’s current superstars were, in fact, named to those exhibition games earlier in their career.

With the NBA salary cap expected to jump from $70 million this season to at least $89 million for 2016-17, a majority of teams in the league may have cap room this summer.

The ascension of Hassan Whiteside is no longer a new story. He was drafted 33rd overall in the 2010 draft by the Sacramento Kings, but was waived just two years later in 2012. After being released, Whiteside played in the NBA D-League, as well as in China and Lebanon. After bouncing around for a few years, Whiteside signed a two-year deal with the Miami HEAT last season and has been putting up monster numbers ever since.

Whiteside has come a long way since being drafted and falling out of the league. His journey is atypical for a physically gifted seven-footer who can now dominate the game in ways few others can. However, that journey has helped Whiteside grow in several ways as a person and as a player.