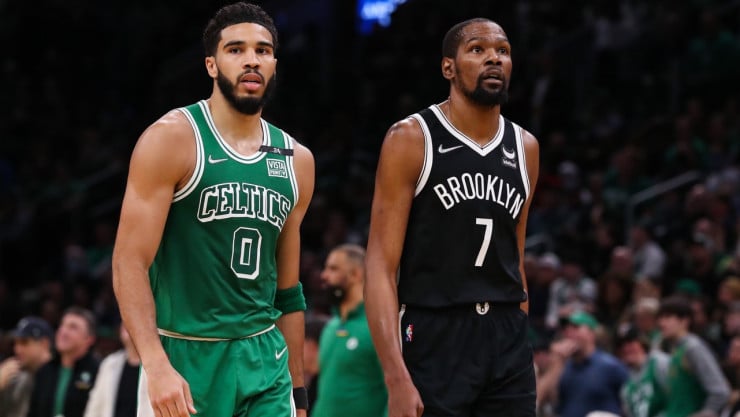 Jaylen Brown has been offered to the Brooklyn Nets as part of a package that would see Kevin Durant head the other way to the Boston Celtics, according to The Athletic’s Shams Charania.

It has been almost four weeks since the news broke that two-time NBA Finals MVP Kevin Durant had requested a trade out of the Brooklyn Nets, and it appears the Boston Celtics are in pole position to land the 33-year-old this offseason.

According to Shams Charania of The Athletic, the Celtics offered guards Jaylen Brown and Derrick White as well as a single draft pick to the Brooklyn Nets for Durant which was rejected and countered, with the Nets holding out for more from the NBA finalists.

Sources: The Boston Celtics have offered a Jaylen Brown package to the Nets for Kevin Durant, which Brooklyn turned down and countered.

Full details on a potential Celtics-Nets mega-deal to be had, latest on Donovan Mitchell and more at the Inside Pass: https://t.co/Gkyfkhg5A1

Brooklyn has reportedly rejected the proposal from Boston, and have countered the offer made by Celtics president of basketball operations Brad Stevens. The Nets are seeking Brown, Defensive Player of the Year winner Marcus Smart, multiple draft picks, and potentially another rotation player in a deal which would be one of the biggest in league history.

The news has come as a shock to Celtics and NBA fans across the globe, who were not expecting the 17-time champions to offer Brown in any trade after a historic playoff run which saw the Celtics eventually fall to defeat in the finals to the Golden State Warriors.

The Celtics were not initially named as potential suitors for Durant when it became clear he had requested a trade from Brooklyn, with the Phoenix Suns and Miami Heat instead believed to be among the forward’s preferred landing spots.

Countless headlines have been made over the years regarding Jayson Tatum and Jaylen Brown’s relationship in Boston, with many claiming that the pair are not well suited to win together – however the recent playoff run has put those declarations to bed.

Jayson Tatum and Kevin Durant are known to have a close relationship, and won a gold medal together at the 2020 Tokyo Olympics as well as battling it out in multiple playoff series over the last two seasons.

Earlier this year, Tatum, Brown, and the Celtics swept Durant and the Nets in the first round of the playoffs in an emphatic 4-0 victory which many saw as a passing of the torch from Durant to Tatum – but now it looks like the 12-time All-Star wants in on the fun in Boston.

Jaylen Brown recently signed with Kanye West’s agency Donda Sports which Nets star Kyrie Irving is also rumoured to be joining, and the trio have been spotted hanging out together this offseason which has sparked rumours of a reunion between Brown and Irving in Brooklyn – after playing two seasons together in Boston from 2017 to 2019.

If a deal were to go through that sends Durant to Boston, this would likely end up as the single biggest trade the NBA has ever seen to date and would propel the Celtics even further up the list as title favourites next season.

According to Charania’s report, a trade is not imminent and the saga is likely continue into August and September before the 2022-23 season commences in October. It is yet to be revealed which jersey Kevin Durant will wear this fall, however as it stands the signs are pointing to Boston.