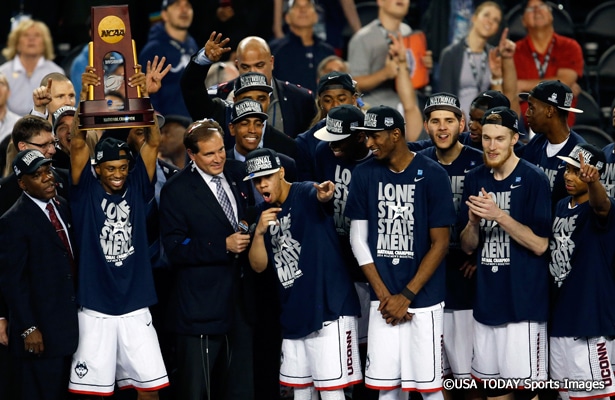 Senior guard Shabazz Napier and Connecticut’s band of upperclassmen proved that experience still means something in the one-and-done age of college basketball.

Napier scored a game-high 22 points as he completed to a collegiate career that was bookended by titles. As a freshman, he was part of Connecticut’s 2011 championship squad.

The Huskies weren’t in the tournament last year due to an NCAA ban for low test scores. Napier, the Most Outstanding Player of the Final Four, made sure that wasn’t forgotten.

“Ladies and gentlemen, you’re looking at the hungry Huskies,” Napier said. “This is what happens when you ban us.”

Kevin Ollie won a title in only his second season as coach, guiding the Huskies to a 32-8 record. Ollie did it with a four upperclassmen in the starting lineup.

“We always did it together and always played as a group,” Ollie said. “It was great. My coaching staff, my players, really, all of UConn being here, that is what it is all about.

“Coach Calhoun, the greatest coach ever, he paved the way, and I just want to thank Coach, too.”

Calipari referred to his team’s youth while taking the lion’s share of the blame.

“It took an unbelievable team,” Boatright said. “It took a special team.”

Freshman forward James Young led the Wildcats with 20 points and seven rebounds. Randle scored 10 points and grabbed six boards in what is probably his final game as an amateur.

“We’ve been through a lot this season,” Randle said. “How we kept fighting … says a lot about the guys. I hate that it ended like this.”

Randle won’t be the only Wildcat to consider the NBA.

Kentucky guard Aaron Harrison opened the second half with a 3-pointer, getting the Wildcats within a point (35-34) for the first time since they were down 7-6. The Huskies momentarily regained control, going up 48-39 on Napier’s baseline jumper.

Young sparked a surge by soaring and dunking over Connecticut backup center Amida Brimah. Young’s three-point play was the first of eight consecutive points for the Wildcats, trailed 48-47 with 8:13 left.

Napier ended the run with a 3-pointer from straight away, and forward Niels Giffey followed with another from almost the same spot on the next possession. Connecticut guard Ryan Boatright extended the lead to 56-50 with a floating jumper with 4:12 to go.

The Wildcats couldn’t get any closer than four points the rest of the way.

The game couldn’t have started any better for Connecticut. The Huskies were the early aggressor behind Napier, attacking the basket and shooting early in the shot clock.

Kentucky tried to match that tempo but ended up taking bad shots that fed Connecticut’s break. After Boatright fooled Kentucky defenders on a reverse layup to give the Huskies a 17-8 lead, Calipari called timeout with 13:08 left in the half.

The break in the action didn’t faze Connecticut or inspire the Wildcats. The Huskies soon pushed their advantage into double digits, and they doubled Kentucky at 30-15.

The Wildcats got back in it by dominating the last five minutes of the half. Kentucky’s 16-5 run, fueled by three 3-pointers and stellar defense, cut the Connecticut’s lead to 35-31 at the break.

Napier led all scorers with 15 points at the half on 6-of-11 shooting, including 3-of-7 from 3-point territory.

NOTES: Connecticut and Kentucky did not make the make the NCAA Tournament field the previous year. The last time both national finalists weren’t in the prior tournament was 1966, when Texas Western (now UTEP) defeated Kentucky. … The national championship game featured the highest combined seeds to meet for the title with No. 7 Connecticut and No. 8 Kentucky. … The Wildcats are 1-4 all-time against Connecticut, with the Huskies winning the previous meeting, 56-55, in 2011. … Connecticut improved to 4-0 in national title games. … Connecticut’s Kevin Ollie was the first coach to reach the championship game within his first two seasons since interim coach Mike Davis led Indiana to the 2002 title game.