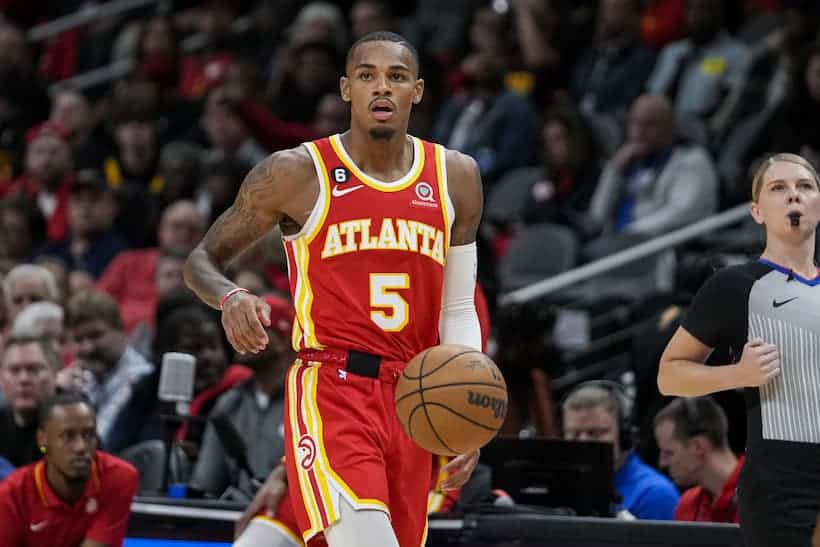 The San Antonio Spurs traded Dejounte Murray to the Hawks for Danilo Gallinari and three first-round picks in the offseason. Murray is still trying to his groove with the Hawks as he and Trae Young do a lot of the same things on offense. He spent six seasons with the Spurs, but has not been shy to trash his former team in the short time he’s not been with them. In his most recent comments, he did not hold back on what he had to say about the Spurs.

San Antonio are 14th in the West at 14-31 and the Atlanta Hawks are 23-22 which is eighth in the East. Murray was an all-star last season for the Spurs, but it’s clear in some of his comments on why he wanted to leave the franchise.

Even coming to a team like the Hawks with a PG in Trae Young who is so ball dominant, Murray is still putting up similar numbers to his 2021-22 averages. Georgia Sports Betting sites have the Hawks at (+7000) to win the Finals this season.

Dejounte Murray and Stak open up about the mind games they both experienced playing in San Antonio. Real talk.

One of Murray’s first grievances he shares in this clip is the fact that in his rookie season the Spurs already had Tony Parker, Patty Mills, and himself at guard. He questioned why San Antonio would bring in Nicolás Laprovíttola, an Argentinian basketball player. Murray also claimed that the Spurs did this to add increased pressure on him to play better and he did not like the mind games behind all that.

You can understand as a rookie why bringing in Laprovíttola would upset Murray. In the end, he would only play 174 minutes in 18 games played and that did not effect Murray’s playing time. It still bother’s him to this say if he’s still brining it up and airing it out.

Another grievance he had was that he resented Spurs legend Tony Parker for leaving when he earned the starting role. He felt that Parker abandoned him and did not mentor him “the way he should have.” That was extremely selfish of Murray to feel this way. Parker is a Spurs legend and his time with the team was done and he moved on like any other player would. Like Murray did as he left the Spurs at the end of last season.

In his closing comments, he did have some nice things to say about the organization. Murray was appreciative to the vets on the team that mentored him while he was there. He also thanked the Spurs for believing in him after tearing his ACL and signing a $60 million deal. Most of the time in the interview, he was bashing the Spurs and have some interesting insight’s to his time in San Antonio.