A look at the rookie PER leaderboard is a stark reminder of how unprepared almost all rookies are to contribute to winning basketball. This is especially the case in the modern era, where the highest-drafted players are usually 20 or younger and the more polished older players often lack the talent to make an immediate impact. At this point, all that can be hoped for are flashes indicating what these rookies can someday be, as well as confirmation that they can compete athletically.  Let’s check in on some of the more heralded rookies.

Minnesota had played well in the early going, but a severe ankle sprain for Ricky Rubio has torpedoed even their limited hopes of competing for the playoffs. With reports indicating Minnesota is trying to trade Corey Brewer and Chase Budinger, it would appear that GM/Coach Flip Saunders has now realized this as well. That will open up minutes and shots for Wiggins on the wing. He already has a near-average usage rate, but that should increase as the season goes on and the Wolves seek to develop him further.*

*The Wolves’ acknowledgement of their inevitable lottery fate casts even more doubt on the Thaddeus Young component to the Wiggins trade, in which they took Young rather than a first-rounder (which originally belonged to Miami) from Cleveland. Young can be a free agent at the end of the season, so it looks like Minnesota surrendered a first-round pick to grab Young for a playoff push that lasted exactly five games before Rubio’s injury. After this year, they will have to pay a steep price to re-sign Young or see him leave for nothing.

At this point Wiggins still basically has two moves, namely a stepback moving to his left and an extremely quick rip through move to his right from the triple threat position. 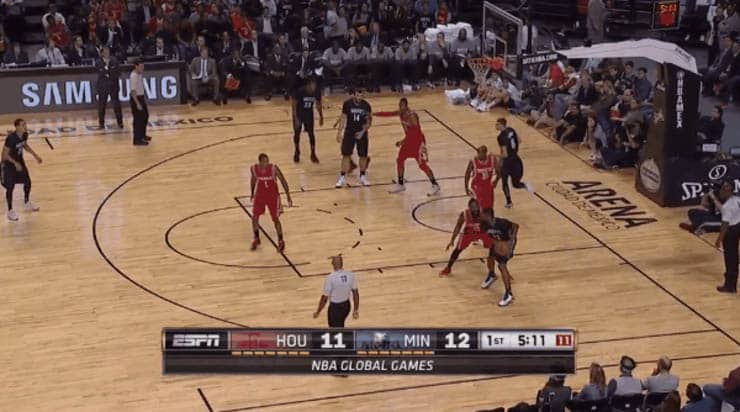 These are both good moves, and he can get the stepback off whenever he wants. He also looks to be comfortable already from the NBA three-point line, where he shoots with no hesitation and solid form.

Overall though, Wiggins shoots 50 percent of his shots from between 10 feet out and the three-point line, and that is not a recipe for efficiency. Getting to and finishing at the basket in the halfcourt is a potential concern, and Wiggins still has only three dunks on the year.

By contrast, Wiggins’ theoretically less athletic classmate Jabari Parker already has 16 dunks in about the same number of minutes. Parker too has a slightly below-average usage rate, which may surprise many since it was assumed he would start firing away immediately. But the Bucks have unexpectedly looked the part of a playoff contender so far, ranking second in defense per NBA.com. That means less license for Parker to fire away. The encouraging part for Parker is that he has played quite a bit at the four and the Bucks’ defense is only slightly worse in his 29.1 minutes per game. It was believed he would be atrocious on that end, and while he’s no stopper he at least has executed well enough that the Bucks have been able to work with him.

Meanwhile, he is shooting only 42 percent from the field and clearly is not yet comfortable from the NBA three-point line, where he has bricked away at 23 percent. However, Parker has shown the ability to get good shots against NBA defenders, and he is an absolute terror on grab and gos. At 6’9 and over 250 pounds, he is unstoppable with a head of steam and his athleticism pops off the screen. 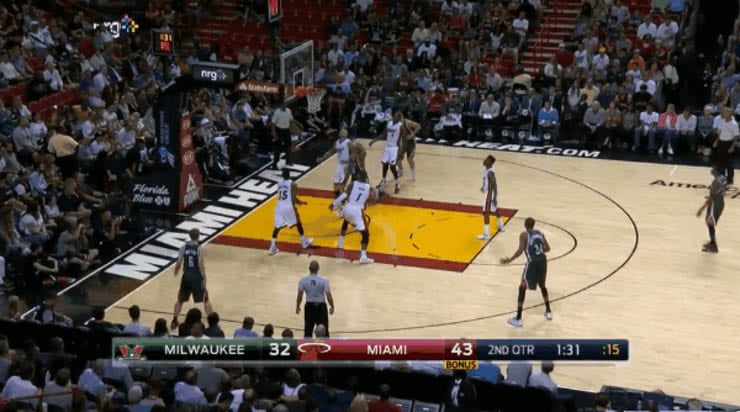 Parker had perhaps his best outing of the season Sunday against Miami, in which he and Giannis Antetokounmpo showed flashes of what a nightmare matchup they can become at the two forward spots. Parker is much too quick and skilled for most fours, so teams have been putting a wing on him. That has left Giannis with the quickness advantage on the four. And it will allow Parker to make more plays like this: 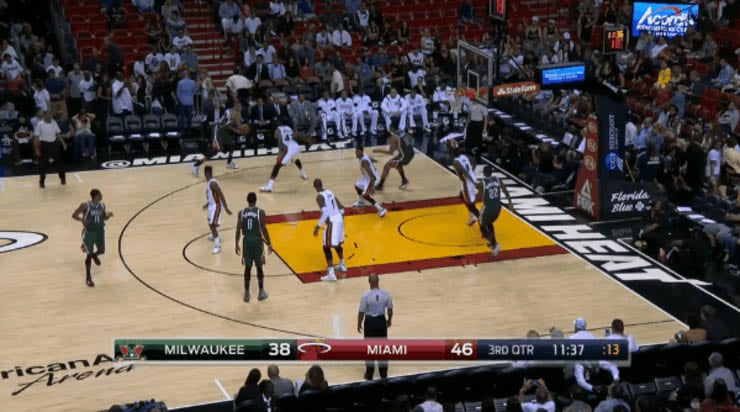 That is Luol Deng, one of the bigger threes in the league, and Parker treats him like a rag doll.

The book on Exum was that he would play little this year as he struggled to adapt to the NBA game due to his lack of high-level experience. But despite some rough moments, he has been much more solid overall then hoped.

In particular, he has avoided being a total liability defensively. Although he suffers from the typical rookie foibles, he is able to make up for it with his quickness and length. His defensive effort has certainly come a long way from a year ago in the Australian high school championships. In time, Exum could be a real problem for opposing point guards with his quick reflexes, anticipation and, most importantly, length. 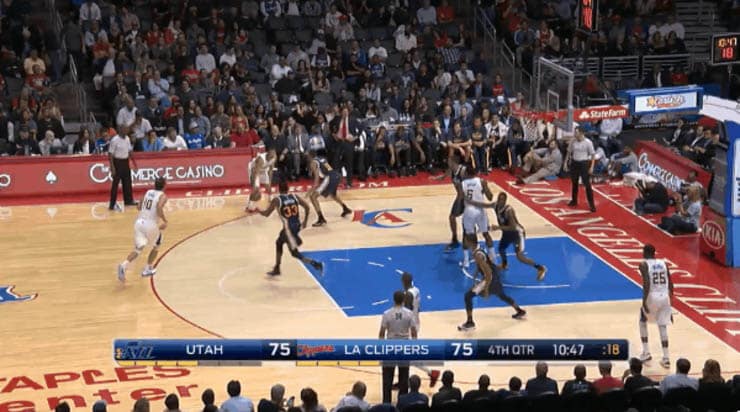 Another area where Exum was supposed to struggle was his standstill shooting. That has predictably regressed a bit after a hot start, but he is good enough out there that he requires a closeout, and has a reasonably quick release. The Australian’s vision has also been excellent as anticipated. He has developed a particular synergy with Rudy Gobert on alley oops. An area to work on is his passing speed. A lot of times he will see the open man on the weakside, but throw a wounded duck that allows the defense to recover.

The only mildly disappointing aspect for Exum has been his ability to get to the basket in the half court. He’s quick, but he doesn’t really have any moves right now one-on-one. Exum also is still overly dependent on his right hand. As a result of his inability to beat his man, only 21 of his 50 shots have been twos, though he has made 12 of those.

Nevertheless, it is very encouraging that he has not killed the Jazz so far, and even closed for a Jazz victory in Detroit. While calls for him to supplant Trey Burke as the starter are premature, especially given the fact that Exum likely isn’t in good enough shape to play more than about 25 minutes yet, given where he’s coming from this is an encouraging performance so far.

Payton’s skill set is about as advertised so far. He is going to be a monster on defense with his intensity, length and quick hands. Payton surprises veteran players by getting to the ball, and on one memorable sequence he straight up ripped Andre Miller’s dribble two possessions in a row. Any loose ball in his vicinity is immediately vacuumed up.

The Magic point guard has also looked excellent setting his teammates up, with 5.1 assists in only 24.8 minutes per game. Payton has a fun game that has had the NBA Twitterverse abuzz.

Unfortunately, he also has an Achilles Heel that may torpedo his efforts to be a high-level starter: He may be the worst shooting point guard to enter the league in the last 10 years. Payton doesn’t even think about shooting NBA threes at this point, even when absolutely wide open. In fact, he barely thinks about shooting any jumper at all. As a result, he takes 69 percent of his shots within 10 feet. Yet overall, he is shooting 32 percent with a 35 percent true shooting percentage.

He is not a good finisher, and this is exacerbated by teams lying in wait for him at the rim since he can’t shoot. Payton also turns the ball over on 22 percent of his possessions, again in part because there is no space for him to operate.

If he cannot improve his outside shot immensely, it is almost impossible to imagine him as a high-level starter. The fact his free throw shooting has been under 60 percent throughout his college and pro careers unfortunately casts some doubt on his ability to improve his shooting.

Mirotic is on a different plane of development from the rest of these rookies at age 23. He already has years of high-level experience in the Euroleague and Spanish ACB for Real Madrid. Nevertheless, he has had a short leash from Tom Thibodeau with three more established bigs on the Bulls’ roster. When one of them has been injured Mirotic has played normal reserve minutes as the third big, but otherwise he averages about five minutes per game at the start of the second quarter. The Bulls have generally been awful in these minutes, but that is due as much to the lineup choices as Mirotic’s own failings. Mirotic usually plays power forward next to Taj Gibson at center, while also playing with fellow rookie Doug McDermott. These units get owned on the boards while making tons of mistakes defensively with the two rookies.

Despite his ineffectiveness in these minutes, Thibodeau needs to get him more time in units with a real center and without McDermott. Pau Gasol has been logging minutes in the high 30s many games, and that is unnecessary because Mirotic can help the Bulls right now. It is telling that he has been most productive in games where he has gotten the most minutes. Although his shot has not gone down with the frequency he would prefer, Mirotic’s ability to run pick and pop, space the floor and drive and kick off closeouts is very useful. In particular, he can abuse larger players trying to guard him, like Spencer Hawes last night. 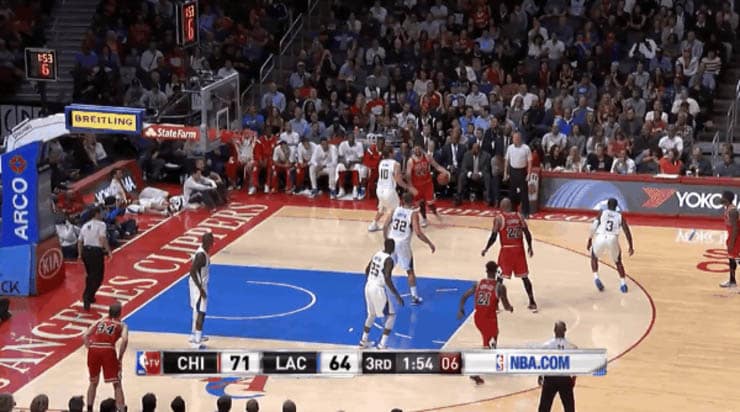 Here is a really slick action the Bulls run. His man must respect the possibility of a handoff to the guard and hang back a bit, but immediately Mirotic himself gets a pick off the dribble. He can either pull up for three going to his right, or drive by his defender. 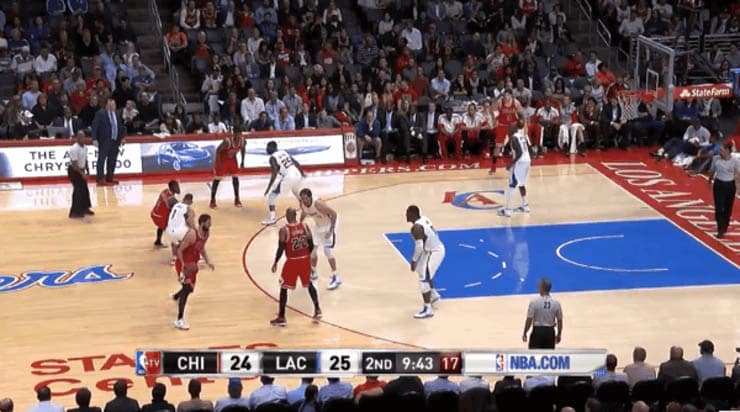 And how many power forwards can throw this pass? 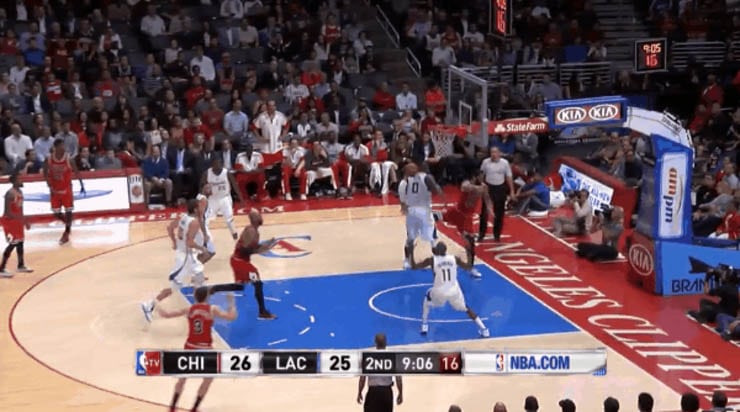 Perhaps the most impressive aspect of Mirotic’s game so far is how hard he plays. He sprints the floor every time down, and looks to be in outstanding cardio shape. He also looks quicker and stronger than in his European days, perhaps due to really lifting weights hard for the first time.

Thibodeau should look to get Mirotic more time, because he can be a unique weapon. He could be particularly deadly in pick and pops with Derrick Rose once he returns.