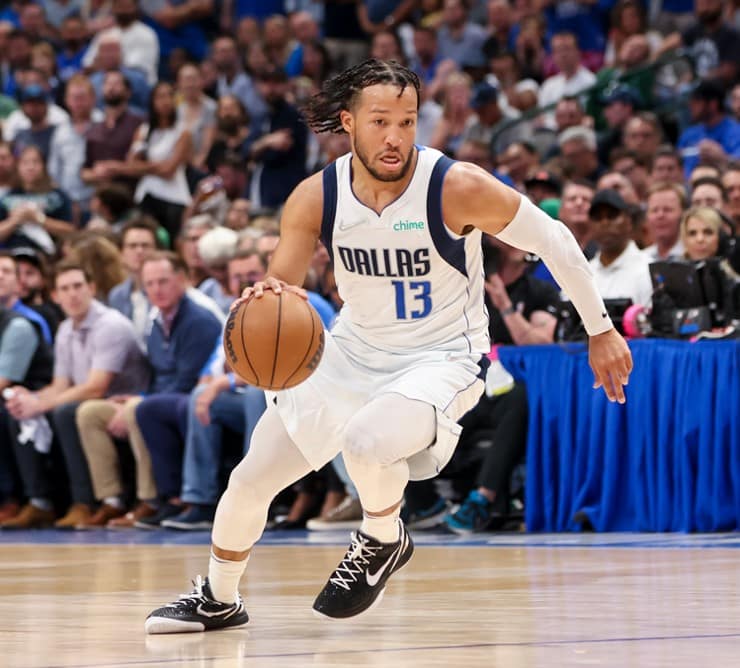 Jalen Brunson is expected to re-sign with the Mavericks this offseason, but according to Marc Stein, there’s “a very real chance” the fifth-year guard could sign with the Knicks. There is logic behind this NBA free agency rumor. During the 2022 NBA Draft, the Knicks traded away their No. 11 overall pick. Not to mention, they offloaded Kemba Walker’s $9.2 million salary for the 2022-23 season.

Since the Knicks missed out on drafting Jalen Duren, fans are wondering if Leon Rose, the team’s president of basketball operations, has a special plan in mind. Of course, Brunson is arguably the Mavericks’ second-best player on their roster. He played a vital role in supporting Luka Doncic this past postseason.

Moreover, Stein reported: “One source close to the process described that threat as ‘very, very, very real.’ The Knicks are increasingly expected to assemble a four-year offer to Brunson valued in that $100 million range.” Mavericks’ owner Marc Cuban is willing to match any offer. For a side note, it is cheaper to live in Texas than it is to live in New York. The taxes are lower.

Where does Jalen Brunson want to play?

Another reason why this news is interesting is because Rick Brunson, Jalen’s father, is now serving as an assistant coach with the Knicks under Tom Thibodeau. However, if he wants to win a ring, he’s better off staying put. Regardless, the free agent guard is definitely exploring his options right now. He knows he’s in full control of his future.

“But further boosting New York’s chances is a growing belief among some close to the situation that Brunson wants this move to Madison Square Garden despite his considerable rise in prominence as a Maverick and Dallas’ ability to outbid the Knicks, enticed by the opportunity to become New York’s unquestioned lead guard on top of strong family ties,” explained Stein.

Considering Cuban will offer Brunson x amount of money to get him to stay, the guard would have to want out for him to actually leave. If it’s not about the cash, he might be headed to the Big Apple. In a total of 79 games played in the 2021-22 season, the 25-year-old averaged 16.3 points, 3.9 rebounds and 4.8 assists per game. Plus, Brunson shot 50.2% from the field.

Expectations are high for Brunson

Furthermore, the Mavericks selected Jalen Brunson 33rd overall in the 2018 NBA Draft. Statistically, last season was his best season of his NBA career so far. In the 2020-21 season, he averaged 12.6 points, 3.4 rebounds and 3.5 assists per game. He placed fourth in voting for the Sixth Man of the Year Award.

Additionally, during the 2022 NBA Playoffs, Brunson scored a career-high 41 points in the Mavericks’ 110-104 win in Game 2 of their first-round playoff series against the Jazz. He was also a successful guard in the NCAA — helping Villanova win two championships in 2016 and 2018 — but Brunson has yet to win an NBA award. The player might decide to test his abilities away from Doncic.

Per multiple sources, the Mavericks were anticipating a price tag near four years, $90 million. Though, the Knicks will likely offer Brunson an even better deal. Dallas fans shouldn’t worry. Cuban will do everything he can to retain his guard.

Again, it should go without saying that this all comes down to where Brunson wants to play. The Knicks finished 37-45 (.451) last season, whereas the Mavericks closed out their regular season 52-30 (.634).