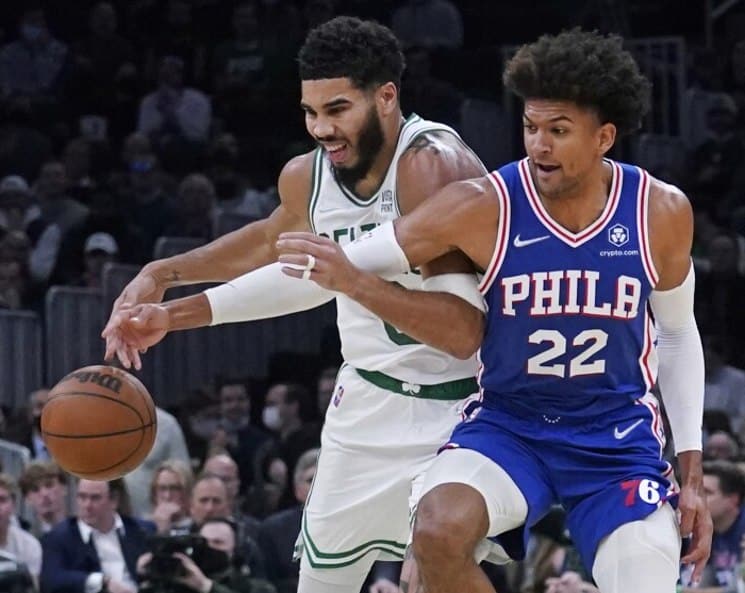 In tonight’s intraconference matchup, the Philadelphia 76ers (15-15) are facing off versus the Boston Celtics (15-15) at TD Garden. Will Joel Embiid and the 76ers earn their first head-to-head win this season against the Celtics?

Heading into tonight’s Eastern Conference contest, the 76ers are 13-17 against the spread in the 2021-22 NBA regular season, while the Celtics are 15-14-1 against the spread. The tip-off time is 7:30 p.m. ET. The contest will air live through NBC Sports Boston, NBA League Pass and NBC Sports Philadelphia. Referencing Land of Basketball’s database, based on 456 head-to-head regular season games played all-time, Boston is 263-193 versus Philadelphia. However, in the last three meetings, the Sixers are 2-1 against them.

On Dec. 1, 2021, the first meeting of the regular season, Boston defeated Philadelphia 88-87 at TD Garden. For the 76ers-Celtics on Monday night, oddsmakers are still unsure if this contest will even be. On Sunday, the league postponed the 76ers-Pelicans matchup due to the number of players in the COVID-19 health and safety protocols. While Philadelphia has several players listed as questionable, Boston will not have Al Horford, Jabari Parker, Josh Richardson, Juan Hernangomez, Grant Williams, Brodric Thomas or Sam Hauser in this matchup.

This news comes after the #Celtics had six players miss Saturday’s victory over the #Knicks due to health and safety protocols. #notgoodflow https://t.co/6vpP4GaVdk

Celtics officially have 10 players on their injury report. Seven have been ruled out for tomorrow’s game against 76ers. Tatum, Schroder and Langford all questionable with non-covid injuries/illnesses.

Moreover, in the 76ers’ 114-105 road loss versus the Nets last Thursday, center Joel Embiid led his team in scoring, accumulating 32 points in 33 minutes played. Guard Seth Curry closed out his performance with 29 points, 3.0 rebounds and 4.0 assists in 38 minutes spent on the court. While the Sixers outscored the Nets 31 to 19 in the third quarter, they also allowed 39 points in the opening quarter.

Per ESPN’s Basketball Power Index, the Celtics have a 63.2% chance of winning.

As for the Celtics, on Saturday, in their 114-107 home win over the Knicks, Josh Richardson scored a team-high 27 points in 32 minutes of action. Forward Jayson Tatum amassed 25 points, 9.0 rebounds and 2.0 assists in 36 minutes played. The Knicks outscored the C’s 41 to 24 in the third quarter, but Boston’s 62-point first half was too much for New York to overcome.

Moving on to betting trends, the 76ers are 1-6 ATS in their previous seven performances. The total has also gone under in 11 of their last 15 contests played in December. Next, Philadelphia is 3-6 straight up in the team’s past eight games versus Boston. Plus, they are 5-0 ATS in their previous five matches versus the C’s. To add to these betting statistics, the team is 0-6 SU in their past five matches against Atlantic Division opponents.

On the other side, the Celtics are 2-4 SU in their last six performances. Also, the total has gone under in seven of their previous 10 games versus Philadelphia. And, the C’s are 8-2 SU in their past 10 contests played at TD Garden. Next, the team is 4-1 ATS in their last five games played on a Monday. Taking everything under consideration, contemplate picking the Celtics to win and cover the spread. If you want to learn more about sports betting, read our handicap betting guide.

Pick the Celtics to win, they will cover the spread and the total will go under 213.5. Boston is a three-point favorite at home with BetUS.