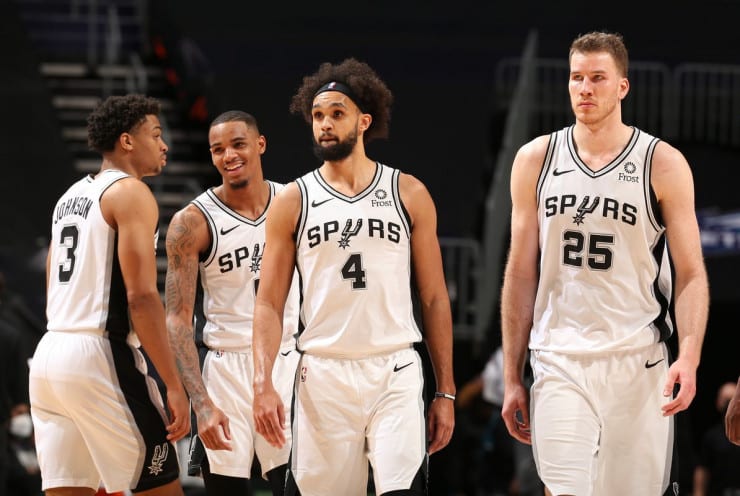 The bad news for San Antonio Spurs fans is that their team missed the playoffs for the second consecutive year. The good news is that the franchise seems to have a solid direction moving forward. Through the draft and free agency, GM Brian Wright and the front office have made several moves this offseason, which should pave their path back towards the postseason.

To say that the Spurs have been consistent winners would be a massive understatement. From 1973 to 2019 San Antonio only missed the playoffs four times. That incredible sustained success was highlighted by their 22 consecutive playoff appearances dating back to the 1997 season. In that time frame, they earned five championships and were coached by one man – Gregg Popovich.

After finishing with a 20-62 record in 1997, the organization named Popovich the new head coach, and the rest is history. Though there is just one title since 2007, Pop is still motivating and still teaching. After guiding Team USA to another gold medal in the Tokyo Olympics, he now shifts his focus back to San Antonio where the roster is not quite what it looked like when he left for Japan two weeks ago.

Gone are the veterans and mentors who helped pass the culture on to the next wave of youngsters. DeMar DeRozan left for Chicago. Rudy Gay went west to Utah. Patty Mills kept the same team colors but now calls Brooklyn home. Those three all have more than 11 years of experience in the league but are moving on. With Gorgui Dieng heading to Atlanta and Trey Lyles to Detroit, Jakob Poeltl is now the “veteran” on the roster with five seasons under his belt.

Patty Mills will not be returning to San Antonio, having agreed to a $12M deal with the Brooklyn Nets, his agent Steven Heumann tells ESPN.

On the topic of veterans, the Spurs do have a couple of good ones coming back from the sign-and-trade deal for DeRozan. Thaddeus Young and Al-Farouq Aminu will now wear the black and silver, and while their tenure in Texas is unknown, it would be wise to hold onto Young. The 15-year veteran still has gas left in the tank, is an incredible locker room presence, and San Antonio lacks depth at his position.

In that same deal, the Spurs were able to get a future first-round draft pick, a 2022 second-round pick, and the Bulls’ 2025 second-round pick. The future assets are nice, but San Antonio already has an impressive young nucleus to build around.

Their young core may not have the one superstar like Zion Williamson, Luka Doncic, Trae Young or Shai Gilgeous-Alexander but that isn’t the blueprint for the Spurs anyway. Instead, they have a handful of equally talented players that are capable of taking over on any given night. In a superstar-driven league dominated by one-on-one play, San Antonio thrives on moving the ball and playing the game the right way.

Their guards are different but dynamic. Dejounte Murray has made massive strides in terms of his shooting while continuing to be one of the best wing defenders in the league. His length and athleticism are well known but his court vision and ability to get to his spot have taken his game to new heights.

Derrick White was injured for most of last season but has been a solid offensive weapon in his first two seasons. His absence this past season opened the door for Lonnie Walker, who flourished with that opportunity. The guard out of Miami credits Popovich with his quick turnaround, and understanding of the game. Devin Vassell and Tre Jones just finished their rookie seasons, and have potential as well.

The real breakout player for the Spurs has been Keldon Johnson. The forward has excelled in his role with this team and even earned himself a spot on Team USA this summer. It helps that Popovich already trusts him to play his role but Johnson earned his spot on the squad.

Keldon and Coach Pop are gold medalists!!🥇Congratulations @usabasketball ! We can’t wait to welcome our guys back to SA after an incredible journey 🙏🇺🇸#Tokyo2020 x #Basketball x #NBCOlympics pic.twitter.com/1vbvpBEzX2

With five veterans heading out the door, San Antonio brought in some fresh faces this offseason. Their main target was said to be Lauri Markkanen but when they weren’t able to give him the money he wanted, they quickly pivoted to two guys with a similar playing style. The Spurs completed three-year deals with Doug McDermott and Zach Collins to fill that stretch-four role.

McDermott is coming off a career year with the Indiana Pacers where he averaged 14 points per game while shooting 53 percent from the floor. His 62 percent effective field goal percentage was also a career-best. Last season he showed his ability to drive into the lane and finish inside, proving that he is more than just a reliable outside shooter.

Collins played just 11 games this past season after another surgery prevented him from getting back on the court. His ability to shoot and defend at his position gives them a solid player to continue to develop, as he is still just 23 years old. Chandler Hutchison is another young prospect that the Spurs acquired as part of the five-team trade that sent Spencer Dinwiddie to the Washington Wizards.

Fresh off of winning a championship with the Milwaukee Bucks, Bryn Forbes has decided to return to San Antonio. The former Michigan State product spent his first four seasons with the Spurs where he played a pivotal role at shooting guard. He bolsters an already loaded backcourt in San Antonio. He knows the system well and will provide valuable championship experience.

Bryn Forbes replaces Patty Mills as the only NBA champion on the Spurs roster https://t.co/CFCcCvHJ7w

San Antonio selected Joshua Primo in the draft lottery. Though it was somewhat surprising, the more you study his game the easier it is to see why they chose him. The 18-year old is oozing with potential, and you can already see the talent. His unique skill set makes him a serious threat to become a lethal three-level scorer in the league. They took a worthwhile gamble on Joe Wieskamp in the second round of the draft and signed center Jock Landale as well.

With a total of 13 players aged 26 and under, San Antonio will have one of its youngest rosters in team history. While they may not be championship contenders next season, they at least have a wealth of young talent and a firm direction going forward. As long as Popovich is there, the team is in good hands.