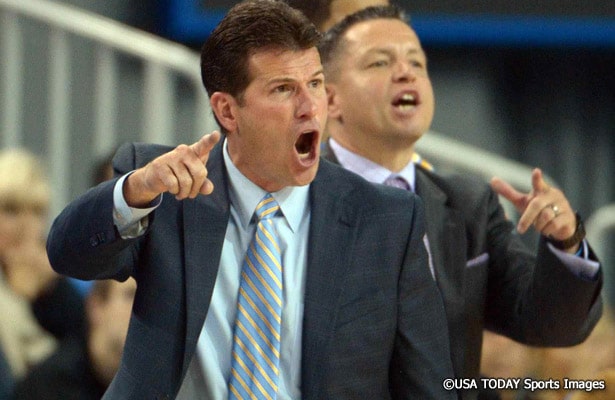 We’re all working toward retirement; the days where we don’t have to worry about setting an alarm clock, taking orders from anyone or having any kind of financial concerns.

UCLA assistant coach David Grace earned his retirement by defending our country for 20 years in the Air Force. He didn’t have to work another day in his life if he didn’t want to, but Grace wasn’t ready to stop making a difference in other people’s lives. Only, after dedicating two decades to the military, he could afford to do so in a different way: through the game of basketball.

Grace got his first coaching job coaching a group of five-year-olds, including one of his children, at the local YMCA. Later while still in the US Air Force, he started coaching high school as an assistant and also coached AAU club basketball. He had great success there, leading the Arizona Magic program that he founded to a top eight finish at the Reebok Big Time Classic that included 337 of the top AAU teams from across the country. After retiring from the US Air Force, he became a high school teacher and head coach and won a 5A state championship at South Mountain High School in Arizona during just his second year at the school.

When Grace was in high school, there weren’t any Division I schools knocking on his door to come play for them due to his movement from state to state from his step father being in the military. But, thanks to the success he had coaching in the high school and AAU ranks, his college recruitment came a little bit later in life.

Grace got his first college gig at Sacramento State. He also spent some time at the University of San Francisco before landing at Oregon State, where he really started to make a name for himself at the Division I level. From 2009-2013 the Beavers won 78 games and consistently signed top-tier talent including the likes of Roberto Nelson, Joe Burton, Jared Cunningham (24th pick in the NBA Draft) and Eric Moreland.

He became one of the best recruiters in the Pac-12, so when Steve Alford landed the UCLA head coaching job this offseason, going after Grace to be one of his top assistants was an easy choice to make.

The Bruins have eclipsed the 20-win plateau and are ranked 23rd nationally. They have a strong recruiting class coming in with McDonald’s All Americans Kevon Looney and Thomas Welsh headlining it along with Australian swingman Joan Bolden and GG Goloman. Grace has the ability and resources to go after any player he wants now, domestic or international as this upcoming recruiting class reflects, but even as the caliber of player he coaches improves, the relationships remain the same.

“What I want to do is, I want them to know that they have me for life,” Grace said to Basketball Insiders. “I want a young man to trust me and let them know how much I care about them, and more than just on the court. And once a young man has that trust, he will go through a brick wall to try to reach his goal. Those are the most important things for me, is to make sure that young man knows that I’m not just using him to win basketball games; he’s got me for life. And all the kids up at Oregon State still text and call me. There’s kids that I recruited that didn’t come to Oregon State, or haven’t come to UCLA, and they still keep in contact because they know they have for me life.

“They’ve all touched my life and played a big part in my life. My high school teams, my AAU teams, and now my college teams, I can’t just point out one kid, they’ve all in their way touched me. From the bench players on my high school and AAU teams to the players who are now in the NBA, I love them all.”

There have been a handful of mentors in Grace’s coaching career who have played instrumental roles in his development. Among the most notable was Hall of Famer Lute Olson and he has also enjoyed how Marquette head coach Buzz Williams did not play the Division I level but has had great success with his hard work and passion for the game.

The biggest influence of all, though, was his father. To this day, they remain best friends and his dad is able to provide advice from the unique perspective of someone who has over 30 years of basketball officiating under his belt.

And although they’ve only been working together for a couple of month, Alford is quickly working his way up on the list of most influential people in grace’s life.

“To be around [Coach Alford] has just been a joy. I learn every day from him. He has perfected the processes of winning. Everywhere he’s been, he’s won, as a player and as a coach. The culture is there. He’s building great relationships with the AAU programs all over Los Angeles. I’m helping him with that and so is the rest of the staff. It’s just a beautiful culture; he wants the best for the guys. Like if one of our players walks into our office, we stop everything and we cater to that young man. Our players love playing for him. We’re just about the same age; we have a lot of the same values. That’s what’s been so great, such a joy to be around. The culture he’s building would be the culture that I would build when I become a head coach.”

Grace’s chance to become a head coach could come as soon as this offseason.

There’s so much that goes into making the transition from being an assistant to a head coach beyond the X’s and O’s on the court and recruiting premier talent, which are Grace’s primary concerns now as an assistant at UCLA.

Head coaches are the faces of their programs and the increased responsibilities include fundraising, media obligations and budget management. For a potential first-year head coach, though, Grace has the experience and background to give any athletic director great confidence in his ability to take those tasks on with relative ease.

“I’ve got 20 years of [supervising] experience in the US Air Force,” Grace said. “I think I probably have supervised more than most head coaches in Division I. I’ve been working every day supervising minds of other people, and that experience alone will give me an advantage in being a head coach. I was responsible for over $2.2 million of jet fuel, I was a fuel accountant. I supervised troops during a war in adverse conditions. So being responsible for that much as a young person, and being really successful, and then all the supervising skills and leadership skills I learned at the Air Force sets me apart .

“So running a basketball program at the Division I level, I think I have an advantage over most because I’ve successfully coached at the AAU, high school, Division I college low major, mid major and now at the high elite level. Add in my tremendous experiences of supervising, leading troops and managing multi-million dollar resources during my time in Air Force and finally being a former high school teacher where academics are a high priority makes me more than ready.”

Grace is now 11 years removed from his time as a Sergeant in the Air Force, but the values and disciplines he learned will remain an everyday part of who he is as a coach and person.

“It has a lot to do with it,” Grace said. “You know, being in the Air Force, you learn so many things. I had great values from my parents before I joined. The integrity, the hard work and the service before self, like they say in the Air Force. My last four years in the Air Force I was a Human Relations Specialist. I was able to attend the Defense Equal Opportunity and Management Institute School. One of the best human relations schools in the world. Learning how to deal with people, and the differences of people all the human relations techniques I have learned sure has helped me in my coaching profession and working with administrators. The Air Force is the best in the world at what they do. Their processes have been perfected. The culture, the sense of family, leadership and followership and all of that has helped me along the way.”

We’ve already seen a couple of head coaches get fired in college basketball this season and there will undoubtedly be more openings that surface as the year comes to a close. With credentials that no one can match, Grace should be at the top of the list for every school in need of a head coach. He has all the makings of a future star in the coaching ranks; the only thing that’s uncertain is which program will reap the benefits from giving him the opportunity.