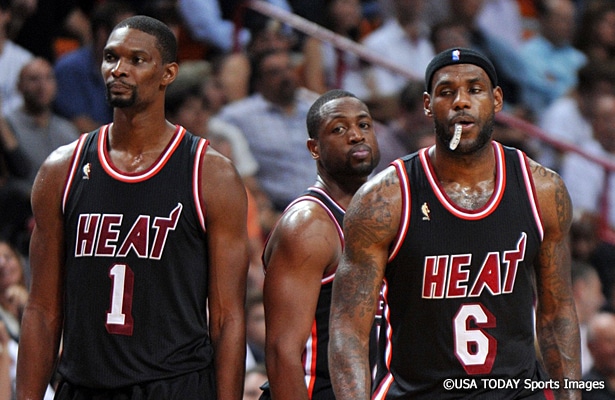 Now that the February NBA trade deadline has elapsed, the time for team building shifts to the offseason.

While teams can look to make trades around the June NBA Draft, based on the existing rosters, a number of teams project to have cap room this summer.

Where teams place in the draft will have an impact.  The top overall pick will eat up about $4.6 million in cap space while the fifth drops to $3 million and 10th is just under $2 million.

Additionally, player options will decide if a team like the Miami HEAT has as low as $2 million or as high as $69.5 million in committed salaries.

Another factor to consider is the $507,336 in cap room that is eaten up for each open roster spot (under 13).  A team without a single player is still charged $6.1 million.

Finally, a team’s own free agents have cap holds that take up space, unless renounced.

The following is a look at the five teams in the Southeast Division of the NBA:

The Hawks have two potential restricted free agents in Shelvin Mack and Mike Scott.  The contracts of Mike Muscala and Pero Antic aren’t fully guaranteed, but are worth keeping.

Luis Nogueira, Atlanta’s 2013 draft pick (16th overall), is playing overseas.  If he doesn’t plan on joining the team next season, his $1.4 million cap hold can come off the Hawks’ books at the team’s request.

Elton Brand would need to be renounced to remove his $4.8 million cap hold.

The Bobcats are still on the playoff bubble, but in the Eastern Conference, they should be able to finish in the top eight.

Charlotte’s 2014 first-rounder should end up with the Chicago Bulls, but the Bobcats will certainly get Portland’s selection.  If the Pistons don’t drop much further in the standings, the Bobcats will also get a nice pick from Detroit.

Josh McRoberts has to decide if he wants to return for $2.8 million.  The Bobcats can afford to keep Jeffrey Taylor at a non-guaranteed minimum contract and still have between $14.7 and $17 million to spend (depending on McRoberts’ decision).

Luke Ridnour is the only free agent of note with an $8.4 million cap hold.

The Bobcats should be in a good position to add a solid free agent to a team that has gradually begun to improve in the Eastern Conference.

LeBron James, Dwyane Wade, Chris Bosh, Udonis Haslem and Chris Andersen can all opt out of their contracts.

The one player almost certain to do so is Andersen at $1.4 million.  Haslem is unlikely to get $4.6 million from anywhere else.

The bigger question is the status of the Big Three.  Does it make sense for James or Bosh to opt out of the final two years on their deal at $42.7 million to look for a new, free agent contract somewhere else?  Would Wade leave $41.8 million on the table?

Is it time for Miami to reinvest in the Big Three for longer than the two years already on the books?  Certainly they’d like to get James signed up for as long as possible.

Could the Big Three all opt out, and take even smaller deals to make room for a Big Four?  If so, Miami would likely need to part ways with Mario Chalmers, Shane Battier and Ray Allen.

The Magic will fall under the cap this summer, the question is how far?

Jameer Nelson’s final year at $8 million is only guaranteed for $2 million.  The team also has to decide on Jason Maxiell, Ronnie Price, Doron Lamb and Kyle O’Quinn, all non-guaranteed.  E’Twaun Moore is eligible for a $1.1 million qualifying offer as well.

If the Magic clean house, they have a massive amount of cap space.

In addition to their own, high lottery pick, the Magic will get Denver’s first (although that could end up coming from the New York Knicks, the lower pick heading to Orlando).  Note that “lower” reflects a position closer to 30 than one.

The Magic recently waived Glen Davis, exactly how much of his $6.6 million comes off their books this summer from the buyout is not yet clear.

Finally, Orlando will need to request for 2005 first-rounder Fran Vazquez (11th overall) to be removed from their salary cap since he’s playing overseas still.

The Wizards should make the playoffs this season, which will land the Phoenix Suns another 2013 first-rounder.

Washington has a number of impending free agents including Marcin Gortat and Trevor Ariza.  Only $2 million of Andre Miller’s $4.6 million contract is guaranteed next season.  Kevin Seraphin and Trevor Booker can become restricted free agents with qualifying offers.

Should the Wizards renounce the rights to Gortat, Ariza, Seraphin and Booker, while waiving Miller, the franchise could get up to almost $16 million in cap space.

The team may be more likely instead to try and keep Gortat while staying over the cap.