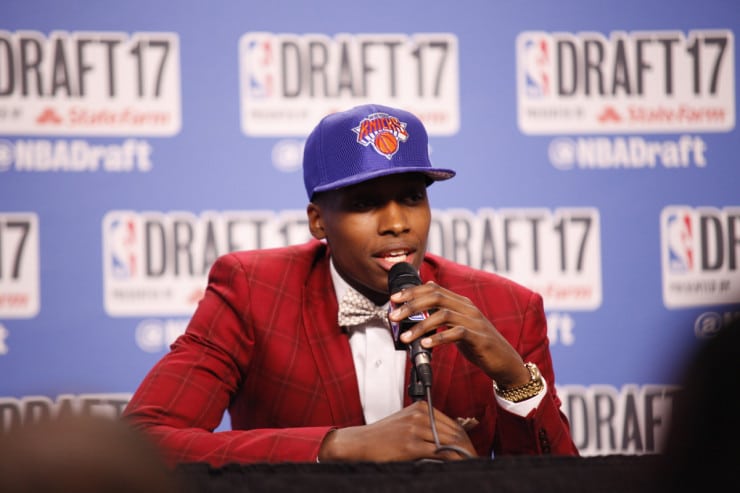 With the futures of both Carmelo Anthony and Kristaps Porzingis somewhat uncertain, the New York Knicks came into the 2017 NBA Draft hoping to find themselves a winner. Now, the once proud franchise will put its faith in the Belgian-born 6-foot-6 point guard, Frank Ntilikina.

Ntilikina saw his draft stock rise dramatically, as the Frenchman showed the instincts that most pro point guards are made of. Playing for SIG Strasbourg of the LNB Pro A, Ntilikina became a household name, despite once being considered a relatively unknown commodity. For the Knicks, he will attempt to become the franchise point guard that the team has always seemingly lacked.

As the Knicks attempt to escape the cellar and return to playoff prominence, Ntilikina may quickly become the face of the franchise, as President of Basketball Operations Phil Jackson continues to shop Porzingis.

What has been most eye-opening about Ntilikina is his impressive size. Standing at 6-foot-6, he has legitimate two-guard size, and is believed to have combo guard ability. With a seven-foot wingspan, his impressive reach also allows him to be a capable two-way player. He is also believed to be able to excel playing off of the ball, and with his high basketball IQ, that would seem to make him an ideal fit for the triangle offense that the Knicks are expected to run. For weeks, sources have pegged Ntilikina as the most likely to be selected for the Knicks out of the trio of Malik Monk and Dennis Smith, Jr.

Jackson guessed correctly with Porzingis, even as he fields calls to potentially trade him. Now, with Ntilikina, we will see if lightning has struck twice.