All of the US exhibitions have been very encouraging so far, with nothing resembling a close call. Slovenia is a solid offensive team that can really bomb from the outside or get to the basket with Goran Dragic and his brother Zoran. The Slovenes recently dealt Lithuania, the projected U.S. opponent in the semifinals, its first loss of the exhibition season.* But the US defense was again outstanding, as it has been throughout the exhibition tour with the exception of a shaky first half against Puerto Rico. Slovenia managed only 71 points on 85 possessions (83.5 points per 100 possessions).

*Most other countries have been playing many more exhibition games than the US.

The US was outstanding in all facets defensively, forcing turnovers on 23.5 percent of possessions, holding Slovenia to 9-of-27 from three and 36.6 percent shooting overall. This team looks as if it will be far superior on that end to its 2012 counterpart. That team played a lot of shoddy defenders and had almost no rim-protection, but simply outscored people with one-way players like Carmelo Anthony and Kevin Love seeing a lot of minutes in the frontcourt.

The offense against Slovenia was a bit more of a slog, especially in the first half when it managed only 46 points on 42 possessions. Part of the problem was missed free throws, but more concerning was the fact the US took a mere three shots from downtown, missing them all. That was due in part to foul trouble from Stephen Curry and Klay Thompson, and without those two players the shooting can become a problem. Without either of those players in the game, opponents would be wise to try out some zone. Nevertheless, the offense exploded in the second half, resulting in a respectable 118 points/100 for the game. But without a true stretch four and great athletes or shooters on the wing, the video game numbers put up by the 2012 team (which often took half its shots from downtown) will not be in the offing this time around.

–The biggest reason the US has been so good defensively is Anthony Davis, a player unlike any who got regular minutes on the 2012 team. He was unbelievable again on Tuesday, with a line of 18 points, 11 rebounds, four steals, four blocks and zero fouls in a mere 18 minutes. Any action involving Davis continues to be death for the offense, like here when he shut down three separate actions before blocking a step back jumper by a guard. 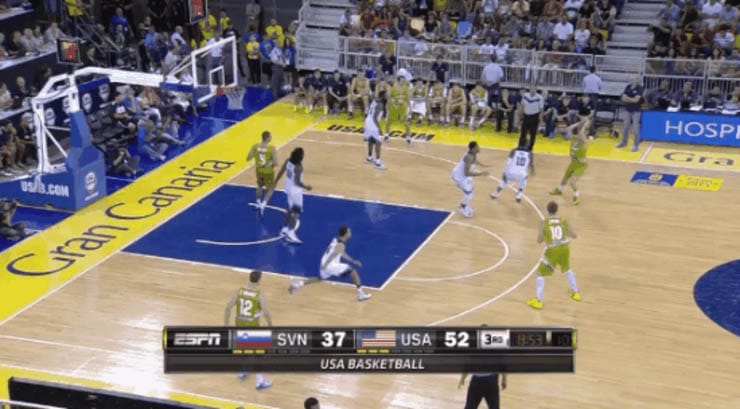 Coach K rotated Davis in and out repeatedly in the first half to keep him fresh rather than slavishly playing him only with the first unit. He will need to play as many minutes as possible in the knockout rounds with the backup centers still looking iffy.

Davis’ on-court defensive numbers were relatively poor last year for the Pelicans, but given his talent it seems very unlikely that will continue this year. His defensive skills have certainly translated into great team-wide numbers defensively on this squad.

The Chicago native should be the best defensive power forward in basketball next year. He will be joined by a top-five center in Omer Asik and a very good point guard in Jrue Holiday. If the Pelicans are not a top-10 defense next year, Monty Williams is going to have some explaining to do.

–Tuesday’s US starting lineup of Kyrie Irving, Stephen Curry, James Harden, Kenneth Faried and Davis has been absolutely outstanding so far, and no starter had a plus/minus lower than 27 against Slovenia. Unfortunately, that means the bench was pretty bad. The two key players without replacements on the second unit are Curry and Davis, who both provide skills that cannot be duplicated on this team.

–Irving had a bounce-back game defensively after getting torched against Puerto Rico. I wrote last week that Derrick Rose should be the starter, but Irving made his case with a team-high +42.

–Rose really struggled. Outside of an initial jag pressuring the ball upon entry in the first quarter, he did little. He missed two layups, had three turnovers and was repeatedly blown by defensively to his right from the left wing. It appeared to be a miscommunication, because he acted like he was icing the pick and roll but there wasn’t a pick to force the ballhandler away from. As a result, the big man was not in position to help him and he allowed multiple straightline drives like this one: 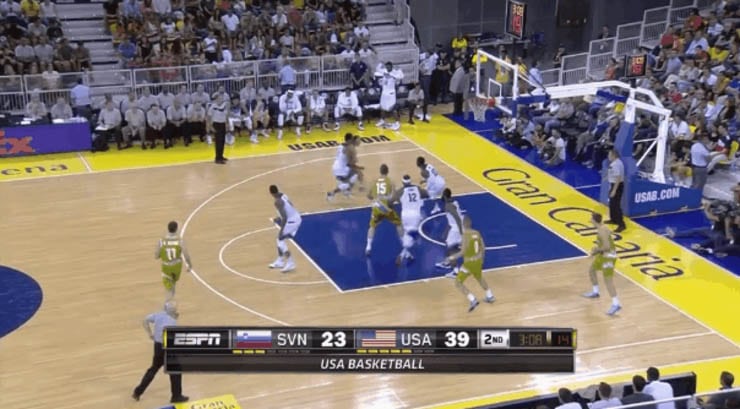 Most disturbingly, Rose did not push the ball hard in transition at all. That is one of his best skills and in his limiting minutes he should be running it down the opposition’s throats at every opportunity.

–Faried has taken up Carmelo Anthony’s delightful Team USA tradition of snagging offensive rebounds on free throws. Anthony was oddly unstoppable in this role in 2008 and 2012, and Faried grabbed two against the Slovenes.

–The backup center position looks no better than it did a few days ago. DeMarcus Cousins was a team-worst -10, a rather difficult feat in a game his team won by 30. His defensive shortcomings are well-known, but he has been strangely poor offensively. In particular, the Kings center has struggled to use his body to finish inside, often resorting to wild double pumps instead of powering up. Team USA has not played any NBA-quality big men the last two games, but Cousins has not really proved able to finish the chances set up for him. This effort is typical. 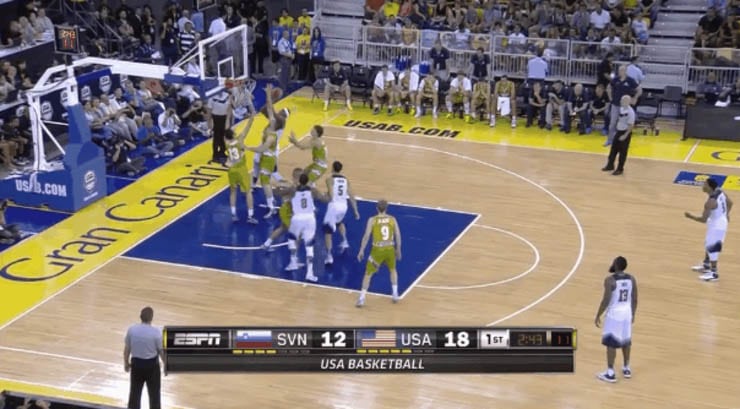 Perhaps Cousins’ knee is still bothering him, but if he cannot even bring adequate finishing at the basket or on his postups, the US really needs to find another alternative.

–I often harp on the difference in athleticism between European basketball and the NBA. Even average or worse NBA athletes have more strength and athleticism than their European counterparts. This Curry drive is a great example.

In the NBA, he would not be able to knock his defender backward and a help defender would likely block his shot as he leaned into his primary defender. Here, Steph blows by his man, muscles him out of the way and there is no help defense to be found.

–Faried illustrates the danger of cobbling together a team simply based on who is the best NBA player, or even exclusively based on skills demonstrated in the NBA. On paper, Faried doesn’t make a ton of sense as a subpar NBA defender who can’t shoot. Indeed, few would have projected he would make this team. But once he got in the practices, he looked great and has carried that over into the games.

Of course, coaches are not infallible and NBA season-length sample sizes mean a lot, but the tryouts and practices provide an unrivaled window into a player’s fit with his teammates or whether he is in-form during the summer, which some players are not.

–A US offensive bugaboo in the first half was a failure to quickly move the ball. Rudy Gay frustrates many with his ball-stopping in the NBA, and he was guilty of it a few times as well against Slovenia. 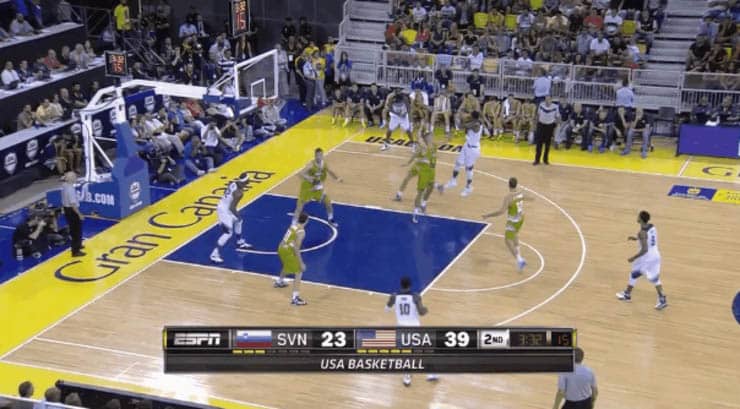 Harden is wide open a pass away in the corner, but Gay instead elects to drive into traffic and give the defense time to rotate.

–I have complained about the way Team USA uses “floppy” sets, and they have largely gone away from them. However, that does not mean downscreen action should be abandoned. The US does a great job here setting a quick screen for Curry for him to drain a jumper early in the clock. 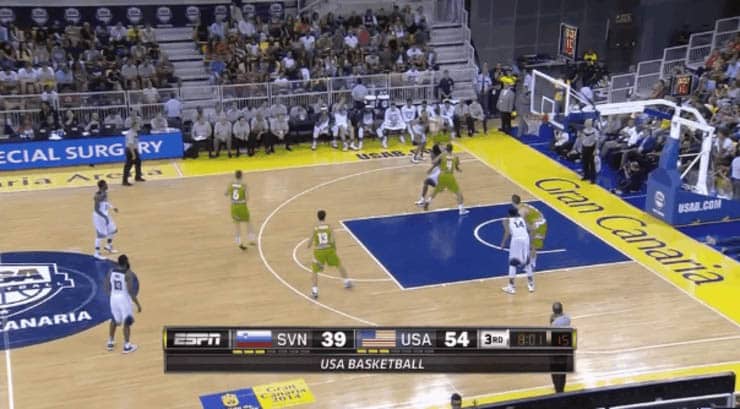 The key is getting into it quickly instead of taking 10 seconds to get everyone set before the action begins.