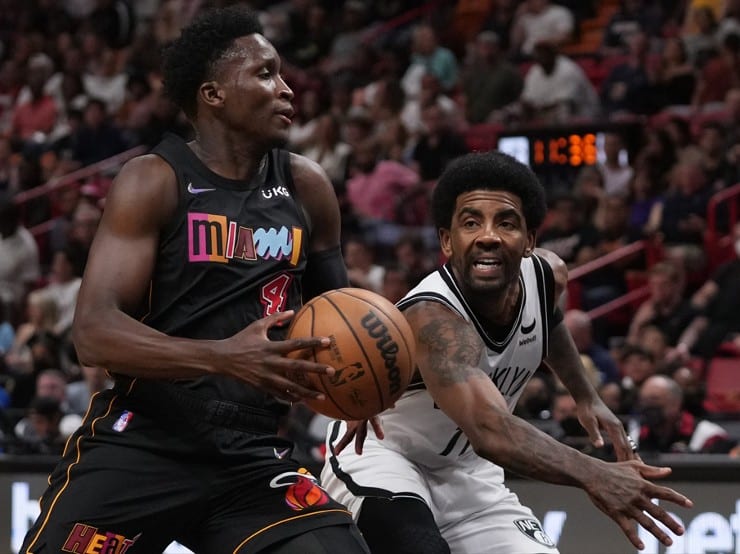 According to BetOnline oddsmakers, the Lakers possess the best odds (+150) of trading for Kyrie Irving; continue reading for the full Kyrie Irving next team odds list. As of Monday, the Heat have second-best odds (+300) of trading for Irving, followed by the Knicks (+425) and Mavericks (+600). Teams cannot formally negotiate sign-and-trades until after 6 p.m. ET on Thursday. Irving has until Wednesday to make his decision.

NBA rumors, news and sports betting picks are on the main page.

Kyrie Irving next team odds, if not the Nets

Additionally, the table below is based on Irving’s preferred list of teams. And the data assumes that Nets G.M. Sean Marks will trade his star guard. The 12-year veteran has a player option worth $36,934,550 for the 2022-23 season. Per multiple reports, the Nets are giving Irving permission to search for a potential sign-and-trade or opt-in-and-trade deal with another team.

Kristian Winfield of the New York Daily News stated, “While Nets G.M. Sean Marks and superstar forward Kevin Durant have yet to speak this offseason, Irving’s camp has requested and received permission from the Nets to speak with other teams about sign-and-trade packages.” Kyrie Irving next team odds are available down below. As of Monday, the Lakers are the top favorite.

At the top of the list, Kyrie Irving’s most preferred team is the Lakers. He wants to reunite with LeBron James. Though, heading to Los Angeles is not the most feasible destination. A sign-and-trade would trigger the Lakers’ hard cap for the 2022-23 season. So, an opt-in-and-trade is the only way this could work. Not to mention, if Irving decides to opt in, the Nets would not have to trade him. To add to that, the Nets are not interested in Russell Westbrook.

Furthermore, it is unknown on which players the Lakers would be willing to trade, in addition to sending away one or two future first-round draft picks. One possible solution is shopping Talen Horton-Tucker, but what kind of a deal is that? In a total of 60 games played last season, the fourth-year guard averaged 10 points, 3.2 rebounds and 2.7 assists per game. Nets G.M. Sean Marks would probably want Anthony Davis in return.

Next, the Heat have the second-best odds of trading for Kyrie Irving. If the guard is seeking another ring, his agent might convince him to head to South Beach. In the 2021-22 season, the Heat finished 53-29 (.646), ranking first overall in the Eastern Conference. During the 2022 NBA Playoffs, the Heat lost in seven games versus the Celtics in the conference finals.

Then, one cannot forget about the 2020 NBA Finals, where they lost in six games against the Lakers. Anyway, the Nets would want Kyle Lowry in return. Jimmy Butler is the key for Miami to remain competitive. While losing Lowry wouldn’t be a big loss, Heat G.M. Andy Elisberg will do everything possible to hang onto Tyler Herro. In 66 games played last season, Herro averaged 20.7 points, 5.0 rebounds and 4.0 assists per game.

Lastly, not much can be said about the Knicks’ interest in Kyrie Irving. If anything, multiple NBA analysts are not buying it. The Athletic’s Alex Schiffer pointed out that Irving likely included the Knicks on his top 5 preferred teams list just as a negotiation tactic, not because he wants to play for them. Plus, the team cleared up cap space for Mavericks’ free agent guard Jalen Brunson.

New York would have to trade away a number of players in order to sign both Brunson and Irving. For that reason, Leon Rose — the president of the Knicks — will focus on signing Brunson as his top priority. Rick Brunson, Jalen’s father, is now an assistant coach on Tom Thibodeau’s coaching staff. If for some reason Jalen Brunson decides to stay with the Mavericks, maybe only then would the Knicks pursue Irving.

In the 2021-22 regular season, Irving averaged 27.4 points, 4.4 rebounds and 5.8 assists last season. In the first round of the 2022 NBA Playoffs, the guard averaged 21.3 points, 5.3 rebounds and 5.3 assists per game versus the Celtics. He missed 35 home games last season after refusing to receive the COVID-19 vaccinations.