Home » news » Nba Am Are You Selling The Lakers Short 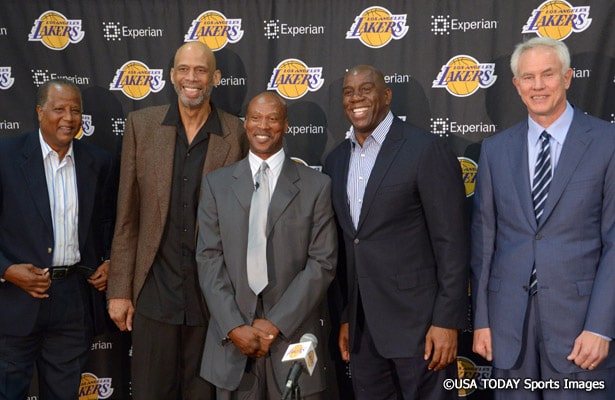 Are You Selling The Lakers Short Next Season?

The power structure has undoubtedly shifted in Los Angeles. The Los Angeles Clippers are now wearing the hat of legitimate title contenders while the once powerful Los Angeles Lakers are languishing in the Western Conference cellar in the midst of a rebuilding phase.

Last season, the Lakers recorded just 27 wins and finished with the second worst record in franchise history. The performance also snapped an eight season consecutive playoff streak which included three trips to the NBA Finals and two more championships added to the mantle.

However, entering the 2014-15 campaign the Lakers face plenty of questions regarding their relevancy within the league’s current hierarchy. On paper, the team boasts a lineup featuring future Hall of Fame guard Kobe Bryant, two-time league MVP Steve Nash and former All-Star Carlos Boozer.

But games aren’t played on paper and those previously mentioned guys are all standing at a career crossroads.

Bryant played in just six contests last season due to a variety of injuries to his lower extremities. Nash, didn’t fare much better, appearing in just 15 games and recording his worst statistical performance since his rookie campaign in 1997.

The aging Bryant and Nash duo account for $32 million of the Lakers’ $67 million on the books this season, which given their recent health woes is a legitimate cause for concern in Los Angeles.

Throw in the fact Boozer was amnestied by the Chicago Bulls this summer with over $16 million remaining on his deal and the Lakers have an additional question mark lingering at the top of their lineup.

The team also lost a mainstay in its frontcourt when former All-Star performer Pau Gasol elected to sign in Chicago in free agency earlier this summer.

For all of the listed uncertainty, there are some positives.

The team drafted promising rookie Julius Randle in the lottery back in June, Bryant should be fully healed by training camp potentially returning at an All-Star level and the team hired veteran coach Byron Scott to replace the departed Mike D’Antoni.

Scott, who led the then New Jersey Nets, to consecutive NBA Finals trips over a decade ago believes the naysayers will have to eat a bit of crow this season and feels the Lakers will be competitive each and every night.

“I expect us to compete every night,” Scott said to The Dan Patrick Show on Thursday.  “The Lakers are “going to play a tough, physical brand of basketball and we’re going to play defense.

“It’s going to be a tough road for us.  We have a lot of work to do. I don’t know how good we’re going to be.  I’ve got a lot of guys that I don’t really know.  I’ve got to get to know these guys and see what makes them tick — but I’ve got one guy (Bryant) that I do know what makes him tick and that’s a great piece to have.”

Snagging a playoff berth in the West next season figures to be a tall order for the Lakers in a season of transition, but Bryant remains the wildcard in their best case scenario. But at 36 years of age, how much can the guard truly handle on a body that seems to be breaking down after years of dominant play?

“This was an extremely difficult decision as I take great pride in representing our country,” Durant said in a released statement. “I know that I owe it to my USA Basketball teammates to be totally invested in the experience. After going through training camp with USAB, I realized I could not fulfill my responsibilities to the team from both a time and energy standpoint. I need to take a step back and take some time away, both mentally and physically in order to prepare for the upcoming NBA season. I will be rooting for USAB and look forward to future opportunities with them.”

Durant left the door open for a return in the 2016 Olympic games and multiple reports indicate his decision to vacate his roster spot had nothing to do with the season ending injury suffered by George in a scrimmage last week.

All-Star guard Stephen Curry told media members before Durant’s withdrawal he was seriously evaluating the risks of playing USA Basketball during the summer before the start of a NBA season.

“I had some doubts when I left Vegas as to the risk that you take when you play USA Basketball, but at the end of the day, we made a commitment to play, and any time we play basketball, that’s a risk we take,” Curry told the Doug Gottlieb Show.

“We’re committed. For now we’re going go out there and win the gold for Paul and do our thing over in Spain, but I haven’t really thought about two years from now because I guess everybody has to make a decision based on where they are when that time comes.”