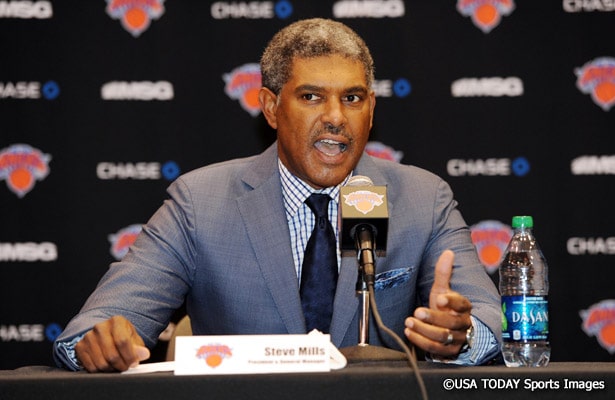 Last summer, Steve Mills was rumored to be a frontrunner for an important NBA executive position based in New York City – but it wasn’t the Knicks GM job, which was then occupied by Glen Grunwald. Word had begun to circulate in July that Mills was in line to replace the exiled Billy Hunter as the new executive director of the NBA players union.

Instead, in an absolutely stunning turn of events, Knicks owners James Dolan “re-assigned” Grunwald (who had built the roster responsible for the Knicks most successful season in nearly two decades) and named Mills the team’s president and general manager. The startling announcement was made on September 26, just four days prior to the start of training camp.

Mills had never been a GM before. In fact, he had been out of the NBA since 2009, when he left MSG following a shakeup at the Garden in the aftermath an ugly sexual harassment lawsuit against Isiah Thomas (the man Mills had previously recommended Dolan hire as GM). Little information has been made public about what exactly Mills busied himself with in years since. We do know he joined Magic Johnson Enterprises where he helped create the Athletes & Entertainers Wealth Management Group, LLC, of which he was a partner. We also know he stayed close with the league’s power elite and the player’s union, which is why his name was frequently mentioned about as the eventual successor to Billy Hunter. And it is now also obvious he stayed tight with his former boss, Jim Dolan.

Nonetheless, it is remarkable Dolan entrusted Mills with such responsibility. Grunwald had done a masterful job building a highly competitive Knicks roster, despite the fact that he inherited a number of bad contracts which pushed New York up against the salary cap, and greatly restricted the team’s roster flexibility. Still, Grunwald was consistently able to find diamonds in the rough (Jeremy Lin, Steve Novak, Chris Copeland, et al) at a minimal cost, which helped flesh out the roster. In 2012-13, the Knicks won over 50 games for the first time since 1997 and captured the Atlantic Division crown for the time since 1994. Grunwald finished third in the NBA’s Executive of the Year voting (tied with Houston’s Daryl Morey). Four months later, he was out of a job.

Mills has mostly flown under the radar since being hired. This is due partly because he’s had very little direct impact on the current constitution of this year’s team. When Mills took over just a few days before the start of training camp, the roster was essentially complete. The only controversial move the Knicks made prior to the start of the 2013-14 campaign was the decision to keep Chris Smith (brother of J.R.) on the roster, despite the nearly unanimous opinion that Smith wasn’t worthy of an NBA roster spot.

For the most part, Mills early tenure has been marked by patient inactivity. Earlier this season, it was reported that the Knicks were engaged in serious talks to acquire Toronto’s Kyle Lowry, but the deal was never consummated. Various league insiders claimed that Knicks were unwilling to part with the pieces the Raptors were demanding (either Iman Shumpert or Tim Hardaway Jr, in addition to New York’s 2018 first round draft pick). There were also a few deals the Knicks were discussing at last month’s trade deadline, most including a package centered around Shumpert. But Mills decided to stand pat.

However, Mills will have several major, franchise-altering decisions to make beginning in July of 2013. In fact, the 13 months between July of 2013 and June of 2014 will determine the next decade of hoop history for the Knicks franchise.

This upcoming summer, as all Knicks fans know, Carmelo Anthony will have the opportunity to opt out of his current contract. Then, following the 2014-15 season, the Knicks will have an opportunity to be major spenders in a what could be a star-studded free agent class. With the contracts of Tyson Chandler, Amar’e Stoudemire and Andrea Bargnani all expiring simultaneously, the Knicks could have upwards of $40 million (depending on what happens with Anthony) to spend on the open market.

But, before we look too far into the future, it is impossible to overstate the impact of what happens with Anthony this summer. After the Knicks announced Mills would be taking over, it was immediately rumored that one of the primary reasons Dolan brought in Mills was because of Mills’ tight relationship with CAA (the omnipresent agency that represents Anthony, as well as many other Knicks players, as well as head coach Mike Woodson). The theory was Dolan believed having Mills at the head of the table would greatly increase the chances of the Knicks keeping Anthony.

Last September, most pundits and fans alike agreed that Anthony was very likely to stay with the Knicks, if for no other reason than the Knicks had the ability to pay him $33 million more than any other team. However, the nightmarish season Anthony and the Knicks are currently enduring has made Mills job that much more difficult.

Moreover, the reality remains that signing Anthony to a max contract could potentially cripple the future of the franchise, as New York would then be committing $129 million to a 30 year-old scorer with a lot of wear-and-tear on his body. If Anthony receives the max from the Knicks this summer, he’d earn $29.2 million in 208-19, after he had already turned 34 years of age.

Earlier this season, Anthony stated he’d happily take less money to sign with a winner. Speaking to reporters in New Orleans during All Star weekend, Anthony said: “I tell people all the time, always say, ‘If it takes me taking a pay cut, I’ll be the first one on [Knicks owner] Mr. [James] Dolan’s steps saying take my money and let’s build something strong over here.’”

But with the Knicks season circling the drain and getting more embarrassing and painful by the day, will Anthony have a change of heart?

It is also very important to remember that the Knicks will be well over the cap next season, regardless of what Anthony decides. Not even including him, New York’s 2014-15 team salary will still exceed $70 million – including $49 million committed to the trio of Stoudemire, Chandler and Bargnani. Because New York will be well over the cap, Mills will not be able to reel in any significant free agents. They also don’t have either their first or second-round pick to improve the roster.

This is something Anthony is going to have to consider this summer when he has to make a life-altering decision. Will Anthony be willing to essentially sacrifice another year of his prime? Has the Knicks organization exhibited an ability to build a winner? Does Anthony have faith in the inexperienced Mills?

In addition, last year, when the Knicks were considered legit contenders, there was plenty of public pressure on Anthony to stay in NYC after the team had traded so much to bring him home and the city had embraced him. Nowadays, on twitter and blogs throughout New York, the public sentiment amongst fans seems to have shifted towards something akin to “Man, I wouldn’t blame Melo at all if he left this mess…”

And if Anthony decides he wants to leave (which may actually be what’s in the best interest of both Anthony & New York) will Mills be able to competently facilitate a sign-and-trade that benefits the Knicks?

This would be an intimidating set of circumstances for even the most successfully seasoned and experienced GM’s in the NBA.

This is the situation Steve Mills will be facing as he enters his first ever offseason as a GM and team president.