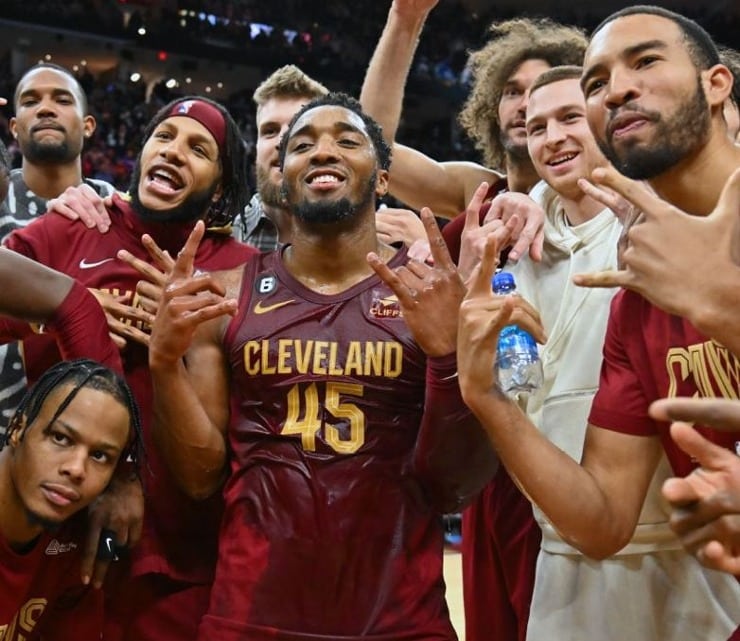 The talent win the league continues to evolve each season and even the greatest players find a way to take their game to the next level. It happened for two-time league MVP Giannis Antetokounmpo last night when he scored a career-high 55 points in a win. His dominant performance isn’t even the best offensive game we’ve seen this week, however. Cleveland’s Donovan Mitchell exploded for a franchise-record 71 points vs the Chicago Bulls on Monday. Where do those epic offensive outings tanks among the top ten points per game scored by a player this season?

It took double OT for the Cleveland Cavaliers to beat the Chicago Bulls on Monday and Donovan Mitchell scored a Cavaliers franchise-record 71 points. He also had eight rebounds and eleven assists in the game. Mitchell played 50 minutes that game and went 22-34 from the field where he knocked down seven three-pointers. Additionally, he went 22-25 from the free-throw line. It was truly a special night for him and the Cavs.

Last Tuesday, Luka Doncic had an all-time game for the Dallas Mavericks. He had a 60-point triple double in the teams OT win vs the New York Knicks. Along with his 60 points, Doncic also racked up a career-high 21 rebounds and also had ten assists. That was a new franchise-record for the Mavericks and it was yet another highlight on what could possibly be an MVP season from the 23 year old superstar. Dallas’ next game in tomorrow vs the Boston Cletics at 7:30pm.

Career-high games seem to be a common thing at the top of this list. Joel Embiid had a career-high 59 points in the 76ers win vs the Utah Jazz back on 11/13. James Harden was out at the time and this gave Embiid the ability to control the offense a bit more than usual. He came within a striking distance of having a quadruple-double that game as he also tallied 11 rebounds, 8 assists, and 7 blocks. Embiid also went 20-24 from the free-throw line that game. Pennsylvania Sports Betting sites have the 76ers at (+1800) to win the Finals this season.

Devin Booker is currently out for at least a month with a groin injury for the Phoenix Suns. They could certainty use him back right now as the team is one a three-game losing streak. Back on 12/17, Booker had an epic 58 point performance in a 118-114 win at home vs the Pelicans. This was not a career-high for him as he hit 70 points in a game earlier in his career. Phoenix is desperately in need of his return as his (27.1) points per game are hard to replicate. The Suns will be facing the Cleveland Cavaliers on the road tonight at 7:00.

Exactly one month ago to the day, Anthony Davis’ 55 points lead the Lakers to a 130-119 victory vs the Washington Wizards. Along with the 55 points he also had 17 rebounds and one assist for the game. He also had three blocks in that game and played in 38 minutes.

Just last night Giannis Antetokounmpo had a career-high 55 points vs the Washington Wizards at home. Milwaukee won the game 123-113 behind Giannis’ dominant outing. The Greek Freak also had ten rebound and seven assists for the game. Antetokoumnpo also went 15-16 from the free-throw line last night. That’s an area where he’s been criticized over his career and it’s something he works on every day to get better at. He’s also scoring (32.8) points per game this season. NBA betting sites have the Bucks at (+600) to win the Finals this season.

Steph Curry is out with a shoulder injury for the Warriors and a number of players have had to step up to keep the team moving while their best player misses time. That’s exactly what Golden State is doing right now of their five-game win streak. On Monday, the Warriors and Hawks went to double OT and Golden State won a close game, 143-141. They were backed by Klay Thompson’s 54 points. He also had eight rebounds and three assists for the game. It was his fourth career 50-point game.

Embiid is so nice that he made it twice. Within a month, Embiid had his career-high 59 point performance in November and then exploded again on 12/11 for another 53 points. He’s just one of those players that can instantly flip that switch and start scoring without any restrictions. Along with the 53 points her had 12 rebounds and 3 assists in the game. The Sixers beat the Hornets that night 131-113.

Not did Pascal Siakam have a dominant 52-point game vs the New York Knicks, but he also ended their eight-game win streak they were on at the time, Along with his 52 points, Siakam had nine rebounds and seven assists. He went 16-18 from the free-throw line that game as well. Toronto’s season hasn’t started how they’d like it to as the team is currently twelfth in the Eastern Conference.

Darius Garland dropped 51 points on 11/13 vs the Minnesota Timberwolves, but it wasn’t enough to get the win for his team. They lost a close game 129-124 at home. Garland went 10-15 from the three-point line in that game and also went 9-13 from the free-throw line. The Cavs were without Donovan Mitchell that night and Garland had to step up and take control of the offense like he had in the past.