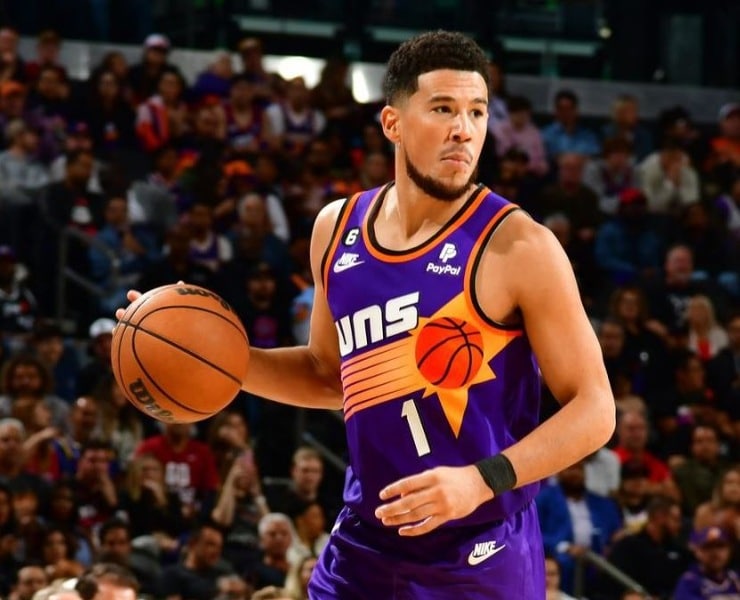 The Phoenix Suns are going to be without some firepower for a while. After only logging four minutes of play Christmas Day, Devin Booker exited the game and never returned to action. Phoenix will have to get accustomed to his absence for at least another four weeks as it is reported he suffered a left groin strain. The Suns ultimately succumbed the Nuggets in an overtime thriller by a final score of 128-125. It was clear they missed their closer down the stretch despite solid outings from Landry Shamet and Mikal Bridges.

Booker will be re-evaluated in four weeks meaning he won’t necessarily return by that time. This is a massive blow to the Suns. Especially when you consider they are currently the fifth seed in the Western Conference and are slowly sinking further down the standings. With how competitive the west is right now, players such as Landry Shamet are going to be expected to step up in a huge way.

The Suns are only two seasons removed from making an NBA Finals. Yet, the consensus seems to be that the Suns’ championship window is closing rapidly. Point guard, Chris Paul, is not getting younger and there have been questions on whether their center, Deandre Ayton, fits in the locker room. However, Devin Booker is in the middle of his prime. He has shown this with many explosive scoring performances this year. Per BetOnline, the Suns currently have +1200 odds to win this year’s NBA Finals. These are solid odds still. However, without their best player, it will be futile, especially if he is out for an extended period of time.

Bear in mind, the Suns are battling teams such as the Denver Nuggets, New Orleans Pelicans, Memphis Grizzlies, and the Los Angeles Clippers in the highly competitive Western Conference. That does not even include the much-improved Sacramento Kings, Portland Trail Blazers, Utah Jazz, and the Luka-led Dallas Mavericks. The team’s next five games feature the Cleveland Cavaliers twice, the New York Knicks, the Miami Heat, and the Toronto Raptors. All of whom have chances at the playoffs this year. Without Devin Booker down this stretch, the Suns are in serious need of their role players to step up in a massive way.

As alluded to already, Booker is having arguably the best season of his career. On the year, he currently is averaging a career-high 27.1 points, 5.6 assists, and 4.6 total rebounds per game. On top of that, he is also tallying an effective field goal percentage of 53.4 percent. Some of his best games this year have included a 58 point performance against the Pelicans. He also had a 51 point outing against the Bulls and a 49 point performance against the Jazz.

That does not even include a plethora of low-40 point performances Booker has had this year. In the last 10 games he has played, Devin Booker has averaged 27.2 points, 5.0 assists, and 3.5 rebounds per game. With all of this in mind, one can see the void Devin Booker will leave within the Phoenix Suns. Without his offensive production, Phoenix has a long road ahead for the next four weeks at least.