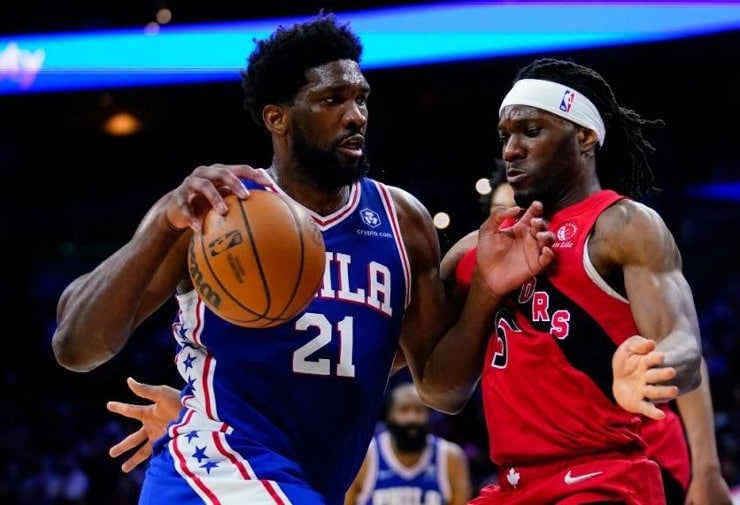 Philadelphia 76ers center Joel Embiid (low back soreness) has been downgraded to questionable for Monday night’s home game against the New Orleans Pelicans. The five-time All-Star is the only player listed for Philly.

Embiid has missed eight games so far this season. Through 27 starts, the seventh-year center is averaging career highs of 33.2 points, 4.6 assists, 1.2 steals, and 1.7 blocks per game. Also, he’s shooting a career-best 52.8% from the floor.

According to a few NBA betting sites, the 76ers have the 11th-best odds to win the championship. Check out which sportsbooks are giving the Cleveland Cavaliers and Brooklyn Nets better odds.

For New Orleans, Brandon Ingram, Larry Nance Jr and E.J. Liddell are all out pic.twitter.com/9qIX81AYPB

Embiid became the first player in NBA history to record a 50/10/5/5 stat line in a game since blocks became an official statistic in the 1973-74 season. When healthy, the four-time All-NBA member is Philadelphia’s most valuable player.

While New Orleans is 5-5 in its last 10 games, the 76ers are 8-2 during the same span. The Pelicans have lost their previous five road matchups against the Sixers. But they’re 4-1 in their past five meetings versus Eastern Conference opponents.

As for the 76ers, they’ve won their last nine home games. Philadelphia is 5-1 ATS in its past six contests against Western Conference teams as well. In the first game of the season series last Friday. the Pelicans won 127-116 at home over the Sixers.

Per ESPN’s Basketball Power Index, the Sixers have a 73.5% chance of defeating New Orleans. Sportsbooks show the 76ers as a 4.5-point favorite at home. Bettors are expecting Philly to win, but the Pelicans will likely cover the spread.