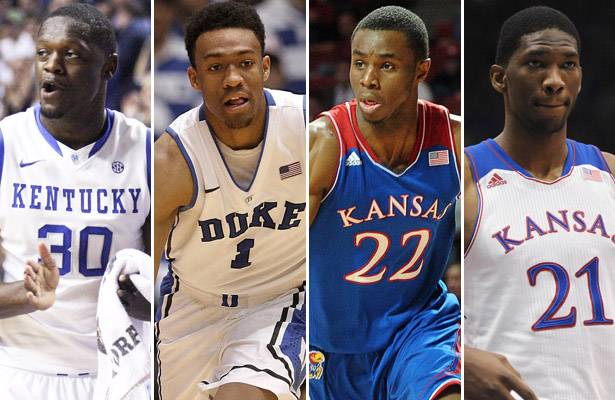 Each week, four of Basketball Insiders’ top writers will break down the latest news and notes around the 2014 NBA Draft. Included is a revised Mock Draft that reflects how each writer sees the draft landscape based on the latest news, workouts and information from in and around the process.

NOTE: The 10th overall pick will belong to the Philadelphia 76ers, not the New Orleans Pelicans.

Yannis’ Notebook: It’s been clear for months now that Dante Exum wants to land with the Los Angeles Lakers. He’s represented by the same agent as Kobe Bryant and has already formed a relationship with him. He’s also stated how much he likes Los Angeles as a city, but the team that could get in the way of that potential pairing is the Orlando Magic.

Clearly point guard is a need for the Magic with Jameer Nelson’s time with the team coming to an inevitable close soon. They’ve experimented with Victor Oladipo at the point some and he certainly looks capable of playing the position, but having someone to help shoulder the playmaking load in the backcourt is still a necessity.

At 6’6 with the ability to also play off of the ball and be a major offensive threat, Exum could be the perfect match with Oladipo for many years to come. But, will Exum’s camp be open to the idea of playing in Orlando? Will they work out and interview with the Magic in order for them to get the necessary background info on him to feel comfortable making the investment? Only time will tell, but if they don’t in an attempt to try to leverage their way to Los Angeles, the Magic have a nice fallback plan in Marcus Smart.

Smart was likely going to be at the top of their draft board, even ahead of Oladipo, had he declared last year. Having them both next year would be an ideal situation for the Magic as they could complement each other in the backcourt just as well as Exum would. Smart may not have the same upside, but he’s ready to contribute now and the Magic need to make a serious jump as they enter the third year of the post-Dwight Howard era.

It’s going to be a difficult decision, but either way the Magic are positioned to land their point guard of the future. If they pass on both Smart and Exum, Tyler Ennis will almost certainly be there for their second lottery pick.

Joel’s Notebook: Joel Embiid scares me. While it’s true that as a two-way center with incredible length and athleticism he’s about as unique a big man prospect we’ve had in the draft in years, centers as young as him already facing back issues should be absolutely frightening to NBA general managers.

You know who Embiid is most often compared to? Greg Oden. That alone is more than enough for Portland to be glad they didn’t end up with a lottery pick this year.

Beyond just his injury history, though, Embiid is extremely unpolished. The talent is there, and as the old adage says, “You can’t teach seven-foot,” but he’s not the smartest basketball player just yet, and his instincts aren’t all that great yet. He’s foul prone, takes bad shots and plays out of control at times, and in a lot of ways he’s still adjusting to living in the United States. He can’t, for example, drive a car yet.

Taking all of that into consideration, it’s baffling to me that anyone would consider drafting him over the infinitely more polished Jabari Parker, or even Andrew Wiggins, who at least has spent his entire life playing basketball with the top talent in the game at every level. In the four to six range, I’d take Embiid in a heartbeat, but Parker and Wiggins are higher on my board, with Dante Exum arguably a more desirable prospect, as well.

Alex’s Notebook: While it’s still very early in the process and the lottery results could still change the landscape of the first round, I believe that Andrew Wiggins is still the most likely top overall pick.

While Wiggins may not have been as dominant at Kansas in his freshman year as some hoped, his seemingly unlimited potential is what sets him apart from some of the other top prospects in this class. Wiggins may not end up as this class’ Rookie of the Year, but five years from now, I believe he will emerge as the draft’s best player, if he is able to maximize his potential.

Joel Embiid, Wiggins’ teammate at Kansas, at one point seemed like a lock to be the No. 1 overall pick, but I believe his back injury is going to scare the team at the top of the draft.

Jabari Parker played very well at Duke and should have a long and successful career in the NBA, but I’ve talked to a number of NBA talent evaluators who don’t believe he has the same upside as Wiggins.

Dante Exum or Julius Randle could climb draft boards and go first overall, but I think it would take a surprise on lottery night, with the top pick going to a team that has a specific need at point guard or power forward.

With so many potential stars in this class, no team wants to be remembered for blowing the first pick and missing out on potential All-Star after All-Star. Wiggins showed glimpses of brilliance during his freshman year even if he wasn’t as consistently spectacular as expected. The reason Wiggins has been hyped up as the next big thing isn’t because of what he is today, but what he could become in a few years. That’s why I still have him rated as the top prospect and likely No. 1 overall pick.

Steve’s Notebook: The NBA Draft Lottery is set for Tuesday, May 20 and while a lot of eyes will be focused on who lands the top three overall draft picks, there are a few teams to watch regardless of where the lottery picks land. Those teams are on the ones with multiple picks, especially multiple picks in the top 20 – Orlando, Boston, Chicago, Philadelphia and Phoenix all headline the list.

The odds that any of those team’s first picks will be on the move is extremely low, however the odds that those second picks will be available is fairly high especially if it can yield a solid veteran or a younger guy that is a little more established.

As much as the 2014 NBA Draft class is talked about, NBA executives and scouts wonder how good the middle of this draft is really going to be and with so many teams staring two top-20 picks dead in the eye, the belief among some teams is that more than a few of them could be had in exchange for second-round picks or picks in the 2015 NBA Draft.

This year’s NBA Draft Combine is several weeks earlier than usual and well in advance of the Draft Lottery, so teams will be meeting with players long before they know what pick they will have. Equally teams will get a chance to potentially meet with players that might be a little bit out of their expected range.

Most pick movement around the draft is the result of who is on the board at any given time, so a lot of the drama about draft picks won’t happen until draft night, although it’s never out of the question for a pick-related deal to drop prior to the draft.

This draft, more so than most, may see a greater than normal amount of pick swapping, simply because of so many teams having valued picks in a class that may bare a lot of fruit inside the top 20.