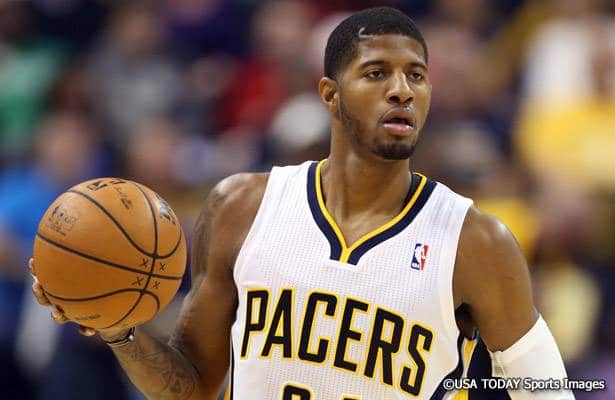 Every once in a while, the basketball gods align things just right and we wind up with two conference finals comprised of the two top seeds in each conference. That’s precisely what’s on tap as we await today’s tip-off of the Eastern Conference Finals between the top-seeded Indiana Pacers and the second-seeded Miami HEAT. Tomorrow, of course, we’ll see the West’s top-seeded San Antonio Spurs take on the second-seeded Oklahoma City Thunder. As we eagerly anticipate the start of what is sure to be a competitive week of basketball, here are five things we’ve learned about the NBA during this year’s postseason run.

Are you ready for the worst kept secret in the NBA? Teams would love to trade for Minnesota’s Kevin Love. Seriously, a lot of them would trade huge assets to get him.

All joking aside, you can safely say that virtually every team in the NBA would make an offer to obtain Love.

Before we get too much further into this; that is not news. It’s not news that the LA Lakers would like to obtain Love, it’s even less of a shock that the Boston Celtics would potentially give up their lottery pick in the 2014 NBA Draft if it returned Love. The Houston Rockets would give up almost anything on the roster not named Dwight Howard or James Harden to get Love.

Time for the Celtics to Trade Rajon Rondo

As the dawn of a new day becomes high noon, Rajon Rondo—even at the young age of 28 years old—is an old sage among his peers.

In basketball years, eight years with one franchise is a lifetime, and in Boston, Rondo has seen it all.

From a 24-58 campaign in which he played behind the likes of Delonte West and Tony Allen to being mentored and at times supplanted by Sam Cassell, Rondo’s drafting, emerging, thriving and surviving in Boston has been a tremendous story to behold.

Yet, just like the talented triumvirate in Boston that featured franchise cornerstone Paul Pierce, the legendary Kevin Garnett and the unbelievably durable Ray Allen, all good things must come to an end.

On Monday the NBA scheduled the official hearing on Donald Sterling’s future as Los Angeles Clippers owner for June 3, 2014. More notably, the “Summary of Sterling Termination Charge” released by the league reveals a number of interesting facets to the league’s strategy. The first confirms what was said in this space a few days ago, namely that Sterling was foolish to refuse to pay his $2.5 million fine. That refusal, as the league points out, provides clear and unequivocal grounds for franchise termination under Article 13(c). Sterling has not-and has stated that he will not-pay the fine, and the league’s release correctly points out that “[a]n NBA membership may be terminated upon the failure of a member or owner to pay any indebtedness owing to the league.”

The day that some teams have been waiting well over a year for is finally here. It’s Draft Lottery night and a little after 8 p.m. ET we will officially know the order for the 2014 NBA Draft. This is one of the most highly anticipated draft classes in recent memory, making spots at the top quite coveted. Andrew Wiggins, Jabari Parker and Joel Embiid – the projected top-three picks overall – are viewed as potential franchise players, while there’s a handful of players in the second tier, like Dante Exum, Marcus Smart, Julius Randle, Aaron Gordon and Noah Vonleh to name a few, who will also make teams feel like they’re walking away as one of the winners of the draft as well if they land them.

In today’s AM Report, Steve Kyler broke down what each team with a realistic chance to win the lottery would do if the ping pong balls bounce in their favor. At the conclusion of the lottery, Basketball Insiders will put out a lottery mock draft reflecting the impact the lottery has on the draft boards. In further preparation for tonight’s Draft Lottery, we take a look back at some of the trades that are going to have an impact on it, and those that would have if certain protections weren’t in place.

David Lee On The Outs In Golden State?

The Golden State Warriors are a team on the rise. The franchise is coming off its first 50-win campaign since the 1991-92 season and has made the playoffs in consecutive years.

But the Warriors’ front office wants to be even better and the group is intent on using this offseason as a way to position themselves to join the ranks of the league’s elite in fairly short order.

For starters the club dismissed head coach Mark Jackson earlier this month, despite the recent run of success the club had under his leadership.

However the changes for the franchise don’t appear to be stopping at the coaching level.

Boston Celtics president of basketball operations Danny Ainge knew going into the NBA Draft Lottery the odds were not in favor of his team getting a top pick. But maybe, just maybe, the ping pong balls would make a surprise landing.

They did, for the underdog Cleveland Cavaliers who got the number one pick in spite of just a 1.7 percent chance. The night was more predictable for the Celtics. They received the sixth pick, which they had a 34.2 percent chance of landing.

“We (Ainge and staff) were all disappointed. But at the same time, we were prepared for this and we knew that this was a strong possibility,” Ainge said Tuesday night from Los Angeles, where he is watching draft workouts. “It’s a momentary disappointment. You hope to get the lucky ball, but now we have some clarity and some marching orders.”

Last month we handed out the hardware for Fantasy MVP and Rookie of the Year, as well as “All-Fantasy First Team” for the top overall performers from this past season. Today, we’ll glance back at drafts held last Fall and highlight the best “Draft Day Values.”

Many of the fantasy owners that won titles in 2014 ended up at the top of their league’s standings due to surprisingly impressive performances from mid-to-late round draft picks. So often, it is these underrated, undervalued stars that make all the difference in leagues across the land.

Listed below is the 2013-14 All-Value Fantasy First Team:

After watching two games of the Western Conference Finals, it has become pretty clear that Oklahoma City is not the same team, especially defensively, without star big man Serge Ibaka. With him, OKC may have been on their way to NBA Finals redemption and an eagerly-anticipated showdown between Kevin Durant and LeBron James. Without Ibaka, they just look like burnt toast.

With the recent news that Ibaka’s calf is healing and he is now day-to-day, his loss probably won’t prove to be among the most frustrating playoff injuries of all time, but here are some of the other most devastating postseason injuries in recent league history:

Andrew Wiggins and Jabari Parker have been hyped up as No. 1 pick candidates for years. They have been in the spotlight seemingly forever and their YouTube highlights and mixtapes have amassed millions of views. Wiggins’ first mixtape was released when he was 13 years old, and he has had the “prodigy” label ever since. Wiggins and Parker have been on the NBA’s radar for a long, long time.

But something interesting happened this past season. Joel Embiid, who had only been playing basketball for four years, entered the NCAA season as a raw center but developed quicker than anyone expected. By the end of the season, most scouts around the league agreed that he had leapfrogged Wiggins and Parker as the top prospect in the 2014 NBA Draft, which seems crazy since Embiid came out of nowhere.

Scott On Lakers: “I Thought It Was A Perfect Fit”

Now that the NBA’s Draft Lottery has finally come and gone, not only can the Lakers move forward with their plans of how to reconstruct their roster with the knowledge they’ll have the seventh selection (barring a deal) come June 26, but they can also actively continue the process of filling their head coaching vacancy. Although GM Mitch Kupchak said there was no sense of urgency to necessarily hire a coach over the next few weeks, the team has already begun interviewing candidates for the position.

Former Lakers coach Mike Dunleavy (90-92) interviewed with the team earlier in the week, and reportedly felt ‘positively’ with how the conversation went. Dunleavy has either interviewed or been mentioned in relationship to the Lakers’ head coaching position each time it has been available over the past decade or so, but the 1998-99 NBA Coach of the Year has also interviewed with the Knicks.

Byron Scott is another available coach that interviewed with the Lakers’ brass this week, and would almost have to be considered one of the leading candidates for the position given all the variables. While UConn’s Kevin Ollie may have been the candidate many felt was ideal prior to his recently signed extension to stay in Connecticut for up to five additional years, Scott brings a lot of similar qualities to the table.