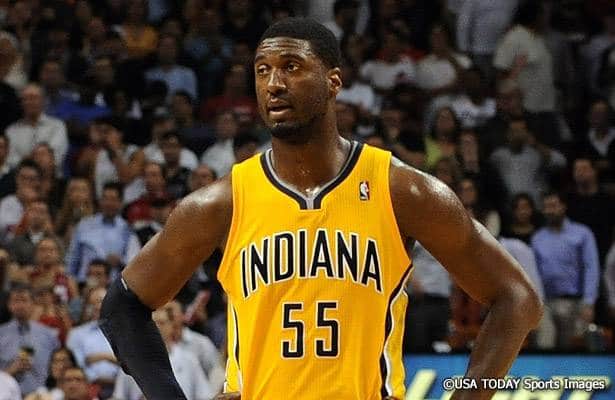 We’ve been chronicling the MVP and ROY races throughout the season, and figured it was time to take a look at the Defensive Player of the Year candidates as we head down the playoff stretch. Even if big men aren’t appreciated nearly as much as perhaps they should be these days, they’ve dominated this category for the better part of 20 years.

Outside of Metta World Peace (Ron Artest) in 2004, a non-C/PF hasn’t won this honor since Gary Payton swiped the award way back following the 1995-96 season. While there are several guards worthy of recognition for their defensive efforts this season, this still might not be the year to expect that trend to end.

As the proverbial “last line of defense,” big men often take this award due to how much they can influence that side of the court with rebounds and blocks, as well as being both an on-ball and secondary defender. Without further delay, here are some of the candidates we expect to be in the discussion.

Roy Hibbert, Indiana Pacers – Hibbert has developed into one of the league’s best rim-protectors, as the 7’2” center has all-but mastered those ‘rule of verticality’ scenarios at the rim. Opponents shoot a league-worst 51.6 percent on shots within five feet against the Pacers. Averaging 7.5 RPG, he’d probably be an absolute lock for the award if he were to average double-digit boards. It should, however, be noted that Hibbert only plays an average of 30.2 minutes per night throughout the regular season, and has proven to increase productivity when leaned upon in the past.

Serge Ibaka, Oklahoma City Thunder – Like Hibbert, Ibaka is not only an excellent shot blocker (2.5 BPG), but also impacts his fair share of shot attempts in help situations. Far from a coincidence, but OKC is second to Indiana in opponent’s FG percentage within five feet, surrendering just 54.9 percent from that range. By comparison, the last-ranked Minnesota Timberwolves allow opponents to shoot a whopping 63.1 percent from five feet and in. Being an intimidating force as a weakside defender may not always be recognized in a standard box score, but you can rest assured opposing players know exactly where Ibaka is any time they decide to attack the paint against the Thunder.

Paul George, Indiana Pacers – George could very well be the league’s best and most versatile perimeter defender. At the very least, he’s in the conversation. George is every bit of his listed 6’9”, but remains agile enough to defend anyone from the league’s best guards to the high scoring forwards like Kevin Durant, Carmelo Anthony, and LeBron James. He’s currently ranked eighth in the league with 13 drawn charges. George is also great at playing the passing lanes (1.8 SPG), and swarming as weakside support.

Dwight Howard, Houston Rockets – Howard may not quite be the absolute defensive terror that once haunted opposing teams (not just big men), but his physical health has returned to a level that has him making plays both in the key and around the court from time to time. He’s in the top 10 in both BPG (1.83), and RPG (12.5). Howard’s presence in the middle as a rim protector also permits the Rockets to extend the defense and run opponents off the three-point line. After finishing 25th in opponent’s FG percentage between 20-24 feet in 2012-13, they are currently second in that particular category this season (35.0 percent).

LeBron James, Miami HEAT – With so much of the focus on James often surrounding his offensive game, it’s almost easy to overlook how devastating he can be on the other end. Even though some of James’ defensive prowess (on big men) can be overstated at times, he remains one of the league’s more versatile defenders. From applying pressure on the ball, to chase down blocks in transition, to playing the passing lanes, James is the catalyst to Miami’s defense when they are at their best.

DeAndre Jordan, Los Angeles Clippers – Jordan may not be the first name that comes to your mind when thinking about this category, but that’s probably because you haven’t been paying enough attention to the progress he’s made under Doc Rivers. Jordan is third in the league in BPG (2.46), while leading the NBA with 13.9 RPG. Although the Clippers still give up their share of transition buckets within the paint, they’ve adopted Rivers’ swarming defensive style around the perimeter specifically because of the ‘safety net’ Jordan can be as a help defender.

Joakim Noah, Chicago Bulls – Noah may only block 1.4 shots per game, but he is constantly challenging shots at the rim, providing support on the pick-and-roll, and his physical nature in the middle discourages players from waltzing down the lane when they play Chicago. The Bulls are ranked in the top five whether it is in opponent’s FG percentage from within five feet, from 15-19 feet, and from 20-24 feet. Meaning, they defend excellently at the rim, in the mid-range, and from deep. Noah is one of the rare bigs that defends the entire court when out there.

Anthony Davis, New Orleans Pelicans – If Davis can stay healthy enough, he could easily be in consideration for one of the league’s better defensive players for the better part of the next decade. He blocks shots both on-ball and from the weakside (3.0 BPG), has quick enough hands to swipe the ball from his man, and is quick enough to flash and flood the passing lane (1.5 SPG) like a player far smaller than his 6’10” frame.

Andre Iguodala, Golden State Warriors – One of the biggest reasons Golden State decided to sign Iguodala in the offseason was specifically for his defensive capabilities. Specifically, to apply pressure around the perimeter. They improved from the 16th ranked team (last season) at defending between 20-24 feet to the league’s best in 2013-14. At 30, he still has the agility it takes to defend the likes of Durant, a healthy Kobe Bryant, or even a Dwyane Wade or LeBron James in the event they were to face them in the Finals.