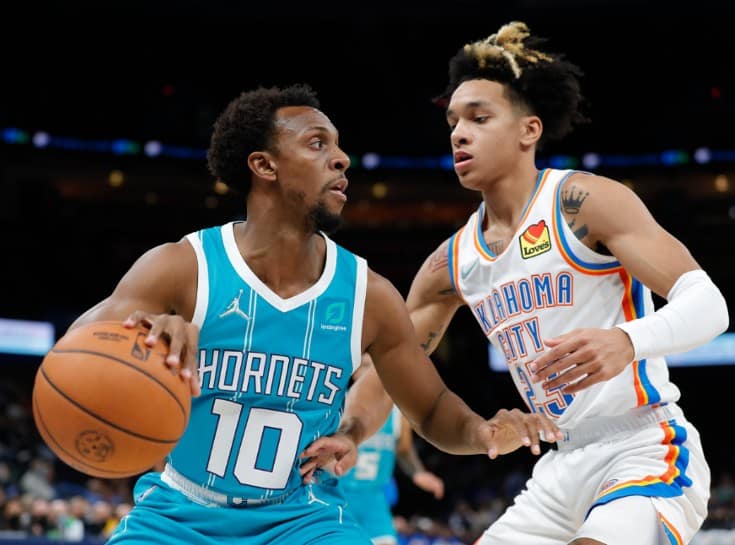 In tonight’s interconference matchup, the Charlotte Hornets are taking on the Oklahoma City Thunder at Paycom Center; free NBA picks are featured here. These two teams are meeting for the second time during this regular season. Keep reading for Hornets vs Thunder preview content.

Can Shai Gilgeous-Alexander and the Thunder squash their five-game losing streak? The guard is averaging 24 points per game and shooting 44.2% from the field this season. In addition to the starting lineups, our top NBA picks and betting trends are available below. If you place bets daily, read our best NBA betting sites list for 2022.

All Hornets vs Thunder betting odds can be found at BetOnline.

For Monday night’s non-conference rematch, the Hornets are striving to earn a top-eight playoff spot in the Eastern Conference standings. Last Friday, in their 142-120 blowout road win over the Pelicans, forward Miles Bridges led his team in scoring with 26 points in 29 minutes of action. Guard Terry Rozier ended his outing with 25 points, 3.0 rebounds and 8.0 assists in 33 minutes played.

The best part of your Monday: HORNETS HOOPS! 🐝 pic.twitter.com/VHxqGKdDtU

As for the Thunder, they have won just two of their past 10 games played. They are currently on a five-game losing streak. In their 125-118 home loss to the Grizzlies on Sunday, guard Shai Gilgeous-Alexander scored a team-high 31 points in 38 minutes played. Also, Memphis outscored them 72-52 in the free throw lane.

Referring to ESPN’s Basketball Power Index, the Hornets have a 74.3% probability of winning.

Oklahoma City is entering tonight’s game 9-25 at home, 11-22 away and 17-13-4 ATS at home this season. Taking into account other head-to-head meetings, in the previous three matchups, the Hornets are 2-1 versus the Thunder. On Jan. 21, Charlotte defeated them 121-98 at Spectrum Center.

Concerning this non-conference rematch, the total has gone under in five of the Hornets’ last six matchups versus below-.500 opponents. However, the total has gone over in Charlotte’s past four contests when playing as the favorite. While the Thunder are indeed dreadful, this betting data should explain why oddsmakers believe the Hornets will win by at least 10 points.

To add to the statistics above, Oklahoma City is 5-1-2 ATS in its previous eight contests played on a Monday. In short, contemplate picking the Hornets to win, they will cover the spread and the total will go over 231. If you have never placed a bet, read our handicap betting guide. Other NBA picks are on the main page.

All NBA betting lines were retrieved from BetOnline. Click below to claim a free bet, if you’re a new customer.