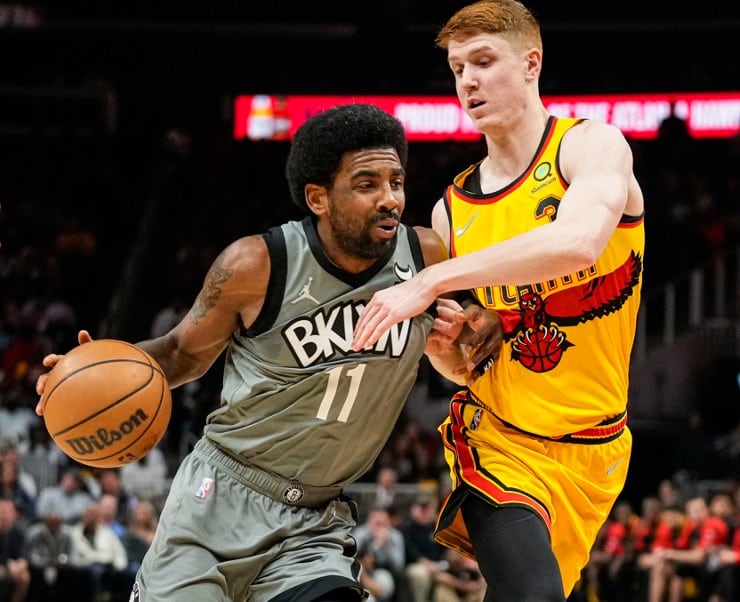 One of the most interesting NBA rumors today pertains to Kyrie Irving and the Los Angeles Lakers. The guard has a player option worth $36,934,550 for the 2022-23 season. And Irving has until Wednesday to decide on whether or not to opt-in to earn this amount. Not to mention, the Nets front office are giving Irving permission to search for a potential sign-and-trade or opt-in-and-trade deal with another team.

According to Kristian Winfield of the New York Daily News, the seven-time All-Star will not be playing for the Nets next season. “While Nets G.M. Sean Marks and superstar forward Kevin Durant have yet to speak this offseason, Irving’s camp has requested and received permission from the Nets to speak with other teams about sign-and-trade packages.” Of the five teams that Irving is interested in playing for, two are passing on him: Mavericks and Clippers.

NBA rumors, news and sports betting picks are on the main page.

Moreover, Irving was interested in playing for the 76ers. However, after the Nets traded James Harden and Paul Millsap there, it would be awkward if he ended up as their teammate again. So, he’s better off sticking with a Western Conference team. Per ESPN’s Adrian Wojnarowski, teams cannot formally discuss sign-and-trades until after 6 p.m. ET on Thursday.

Furthermore, Irving’s most preferred team is the Lakers — even if it’s not a realistic choice. While a sign-and-trade would prompt the hard cap for Los Angeles, an opt-in-and-trade is the most viable option. Then again, what if the Nets pull a fast one on their star guard. Once he opts in for next season, Nets G.M. Sean Marks would have no obligation to trade Irving. If he wanted out of Brooklyn, all he would have left is to pull a Ben Simmons.

Based on several reports, the Nets are not interested in Russell Westbrook. So, aside from giving up one or two first-round draft picks, who would the Lakers trade? Contrary to popular belief, maybe the Lakers aren’t better off without Anthony Davis. In a total of 40 games played last season, Davis averaged 23.2 points, 9.9 rebounds and 3.1 assists per game. In other words, without receiving an All-Star player, the Nets will get scammed.

Additionally, the most realistic option for Kyrie Irving is the Heat. If he wants to win another ring, South Beach might be the answer. Last season, the Heat lost in seven games against the Celtics in the Eastern Conference Finals. And in the 2020 NBA Finals, they lost in six games versus the Lakers. Though, the Heat would probably have to give up Kyle Lowry to make this deal happen.

In the 2021-22 regular season, Irving averaged 27.4 points, 4.4 rebounds and 5.8 assists last season. In the first round of the NBA playoffs against the Celtics, the guard averaged 21.3 points, 5.3 rebounds and 5.3 assists per game. He missed 35 home games last season after refusing to receive the COVID-19 vaccinations.

Per the BetOnline sportsbook, the Lakers have the best odds (+150) of trading for Irving. On the other hand, the Heat possess second-best odds (+300) of landing Kyrie Irving. By the sounds of it, if LeBron wants to play with him again — which he does — it will happen. Other NBA trade rumors are on the main page.