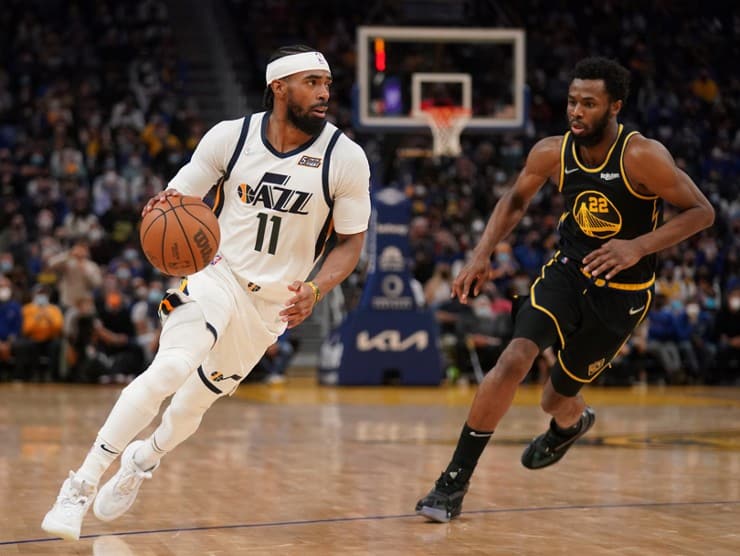 One of the most viral NBA trade rumors this week now pertains to the Cavaliers showing interest in Mike Conley and Andrew Wiggins. In the HoopsHype Podcast, Cleveland.com’s Chris Fedor mentioned to Michael Scotto that “Wiggins is one that I’ve kicked around inside the walls of Cleveland.”

More NBA news, trade rumors and betting content is on the main page.

A look at Collin Sexton’s free agent value and rival teams with potential interest, Caris LeVert’s extension possibilities, Kevin Love’s future with the Cavs, trade and free agency candidates to watch, and more with @ChrisFedor on the @hoopshype podcast. https://t.co/mZYVLfzXYU

Furthermore, the Cavaliers selected Wiggins first overall in the 2014 NBA Draft. However, as part of a three-team trade, the forward and Anthony Bennett were traded to the Timberwolves a couple of months later. In 2020, along with first and second-round draft picks, Wiggins was traded by the Timberwolves to the Warriors for Jacob Evans, D’Angelo Russell and Omari Spellman.

Fans are not sure what to make of this particular NBA trade rumor. Did Mike Conley play his last game with the Jazz? On May 14, he tweeted this message on Twitter: “A tough end to a season that was cut shorter than we expected. I want to acknowledge my teammates and coaches for what they give to this game. And the organization and fans for your commitment and support. Eyes to the future and growth.”

A tough end to a season that was cut shorter than we expected. I want to acknowledge my teammates and coaches for what they give to this game. And the organization and fans for your commitment and support. Eyes to the future and growth. @utahjazz pic.twitter.com/JngemDRM8t

It sounds like either a farewell message or a ‘better luck next year’ type of post. Before Conley re-signed with the organization last August, he told the press, “Like I said, obviously I’ve had a great time here, great, great experiences, coaches — Coach Quinn (Snyder) and the players, Don (Mitchell) and Rudy (Gobert) and everybody, so we’ll just have to wait and see what happens.”

So, there is a good chance that Mitchell will remain with Utah. He’s in a good spot. It’s better for a player not to try to fix what isn’t broken. Nonetheless, this is the sixth consecutive season that the Jazz have not made it beyond the first round of the NBA playoffs. If the team refuses to trade him, at least he’ll have the opportunity to win more playoff games with Utah next season. Other NBA trade rumors are on the main page.

Moreover, if the Warriors return to the NBA Finals and win another chip, it’s possible that only then would Wiggins want out. He wants to win a championship with his current team. Is that not a fair assumption? In the Western Conference Finals, the eighth-year player is averaging 18.8 points, 6.5 total rebounds and three assists per game.

The Cavaliers are a rising team, considering they qualified for the playoffs this season for the first time since LeBron James signed with the Lakers. Plus, the Cavaliers are younger, yet less talented than the Warriors. In the end, it’s all about the money and draft picks. If Cavs G.M. Mike Gansey makes the Warriors an offer they cannot refuse, Andrew Wiggins will be returning to Cleveland.

Other names tossed around the NBA trade rumors board include Bojan and Bogdan Bogdanovic and Gordon Hayward.

RELATED: Lakers will not use first-round draft pick to trade Russell Westbrook