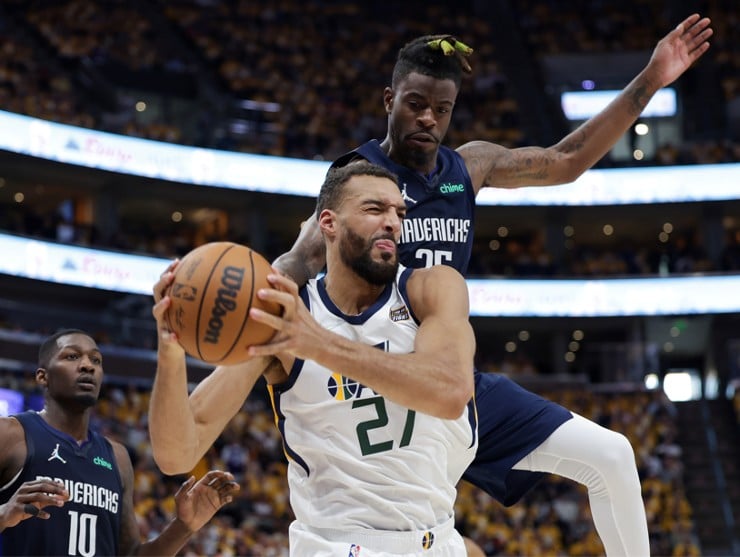 Utah Jazz center Rudy Gobert is now part of one of the latest NBA trade rumors on social media. Even if the odds of a trade are low, NBA analysts are linking Rudy Gobert to the Golden State Warriors. A couple of days ago, other teams were leaked in a potential trade: the Atlanta Hawks, Charlotte Hornets and Toronto Raptors.

Moreover, during an interview on The Hoop Collective podcast, ESPN’s Tim MacMahon asked Brian Windhorst about this particular trade rumor. “I have heard that rumor out there,” said Windhorst. “I guess it would be based around Andrew Wiggins. I don’t know. If the Warriors win the title, I don’t know if they’re looking for a major shakeup.”

What’s next for Donovan Mitchell, Rudy Gobert and the Utah Jazz? | The Hoop Collective – YouTube

That’s something else to think about. Imagine if Golden State won a sixth NBA championship this season. Would they need Rudy Gobert on the roster to begin with? More on this topic is down below. “But the Warriors don’t have that big and they have young players, and they have Wiggins’ contract,” Windhorst continued. “I don’t think they should be considered a leader, but I think that’s on the board.”

The Warriors selected James Wiseman second overall in the 2020 NBA Draft. In a total of 39 games played this season, Wiseman averaged 11.5 points, 5.8 rebounds and nearly one assist per game. Since he missed several games due to a torn meniscus, head coach Steve Kerr and general manager Bob Myers might be seeking a reliable veteran center.

A team with this much talent is in a win-now mode. Maybe that’s why some folks believe this is one of the most likely-to-occur NBA trade rumors. Stephen Curry and Klay Thompson are serious about winning another chip as well.

Next, Kevon Looney is another player to think about. Looney played a full season, averaging six points, 7.3 rebounds and two assists per game. However, the seventh-year player is a free agent. His player option this season is $5,178,572.

The center signed a three-year, $15 million contract with the organization on Jul. 11, 2019. But another team could possibly offer Looney more than what the Warriors can afford to pay him. If he leaves, it makes sense why Golden State would want to pursue Gobert.

Rudy Gobert has an enormous contract for a G.M. to consider | NBA Trade Rumors

Additionally, if Donovan Mitchell demands a trade, Jazz general manager Justin Zanik will want a star player to fall back on. Gobert is a terrific team player. In a total of 66 games played this season, the ninth-year center averaged 15.6 points, 14.7 rebounds and 1.1 assist per game.

Not to mention, three years and a player option is something a lot of general managers are keeping an eye on. If the Grizzlies upset the Warriors in the Western Conference Semifinals, the team is definitely destined to make a trade or two during the offseason. The team could move on from Andrew Wiggins. Although unlikely and unrealistic, this trade move is in the cards. Other NBA trade rumors are on the main page.