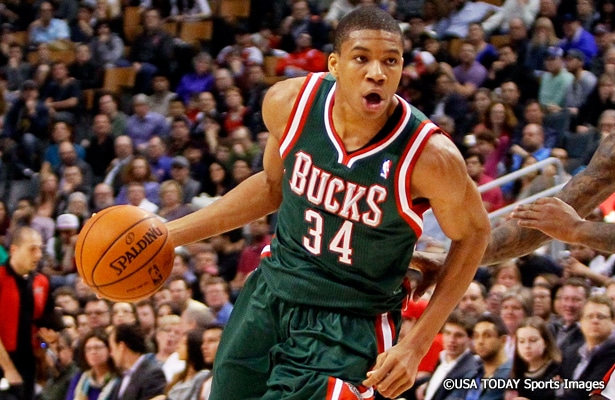 Milwaukee Bucks forward Giannis Antetokounmpo is one of the most intriguing players in the NBA.

He has all of the physical tools to be a dominant player, with his 6’11 frame and 7’3 wingspan, and he’s clearly just scratching the surface of his potential at 19 years old. Not only is Antetokounmpo an extremely entertaining player, he’s also incredibly fun to chat with off the court.

Basketball Insiders recently caught up with Antetokounmpo for this one-on-one interview.

Basketball Insiders: How much do you feel like you have improved as a player from the start of your rookie year to now?

Giannis Antetokounmpo: Coming into the league, I wanted to work every day with coaches. Just work. When I came in the league, I loved the coaches. The coaches trusted me and they wanted me to work hard every day, so in my head I was just thinking about work. I think by working when I came into the league, I’ve improved a lot. First of all, my confidence has improved a lot. I’m thinking that in the year that is going to come, the new season that is going to come, I’m going to be better, have more confidence and be a better player.

BI: Who were some of your teammates that helped you as you made the transition to the NBA? Were there any guys specifically who helped you make that transition?

Antetokounmpo: All of them. When I came into the league, I was 18 years old and I was alone in the United States, so they saw that I needed help. I didn’t know nothing. I didn’t know anything about America and I was just learning the game too. The teammates that helped me were Caron Butler, for sure, Zaza Pachulia, O.J. Mayo and Ekpe Udoh. They helped me a lot.

BI: How hard was that, being a young kid coming to a completely new country and learning all of that new stuff? How difficult was that for you?

Antetokounmpo: It was hard because, first of all, you’re in the NBA so there’s pressure on you. Being a young kid, 18 years old, you need help. That was very good, getting that help. I really appreciate that I had good veterans to help me.

Antetokounmpo: My lifestyle changed a lot. The biggest adjustment was that I was alone. In Greece, I was always living with my family and now I was in America – a country that I’ve never been before – and I’m alone. I was just trying to make my dream come true and be a better a player. I tried to adjust on the court too; the rules are different, the game is a lot faster, it’s more physical and I had to adjust to a lot of things.

BI: It seems like the Bucks have zeroed in on Jabari Parker at No. 2. He feels like he is going to end up with the Bucks. Have you seen him and what do you think of his game?

Antetokounmpo: I’ve seen him. He’s an amazing player, he’s a really good player. He’s an NBA-ready player who can come in and contribute faster than everybody in this draft, I think. He can help us and our team. I talked to him a little bit and he seems like a nice guy. And I think he’s going to take our team to the next level.

BI: Do you feel like the people with the Bucks like him as much as you do? (this was before the draft)

Antetokounmpo: Yeah, I think the Bucks like him too and we’re really excited about him.

BI: How well do you feel like you two can play together?

BI: I saw a report recently that said you grew two inches since you got drafted last year. Is that true?

Antetokounmpo: Yeah, it sounds like a good thing for me. But I still have to adjust, because I’m growing. I have to adjust my game to that.

Antetokounmpo: No! I hope I stop growing! (laughs)

BI: Is your wingspan longer too?

Antetokounmpo: I really don’t know, I never check that.

BI: Being 6’11, that’s the size of a big power forward. Do you ever see yourself maybe transitioning to power forward, playing a little bit of the four spot also?

Antetokounmpo: Look, on a team, I’ll do whatever my coach tells me do. If they tell me it, I’m going to do it. I could see myself in maybe 10 years, 15 years playing the power forward, at the end of my career. (smiles). For now, I think I’m a two-three player.

BI: You have worked with trainer and Bucks assistant coach Josh Oppenheimer. What’s your relationship like with him? How has it been working with him? He is one of the best shooters I’ve ever seen in my life; he doesn’t miss.

BI: You beat him once?

BI: You mentioned being great. When you talk to Bucks fans, they get really excited about your future and they think you can be one of the best players in the NBA. Is that a goal of yours? Do you feel like you can eventually be a superstar player?

Antetokounmpo: Yeah, for sure. That’s my goal. I’m a guy that doesn’t just talk. I just act and try to do it. I’m just working hard every day, challenging myself every day, so that I can be the best that I can be in my life.

BI: What’s it like having an entire fan base behind you? The Bucks fans love you so much, how cool has that been having that kind of support from such a big group of people?

BI: Is it tough to deal with the pressure though? At this time a year and a half ago, you didn’t have that much pressure on you. Now, you almost have the weight of a franchise on your shoulders.

Antetokounmpo: No, I don’t have pressure. As a player, I will never have pressure. I’m just playing the game just to have fun, and I’m going to continue doing that. I think that’s what driving me. By having fun every day ,that makes me stay more and work harder. When practice finishes every day, I stay more because I’m having fun. I don’t want to leave. That makes me better. I’m still working more and more and more, and I’m just trying to have fun and push the pressure to the side.

BI: Have you interacted with the new owners, Marc Lasry and Wesley Edens, at all? Have you dealt with them?

BI: Everyone likes the story of you falling in love with smoothies when you first came to America. Everyone on Twitter wants to know, what is your favorite smoothie flavor?

Antetokounmpo: I think berry. And strawberry too! Those are nice.