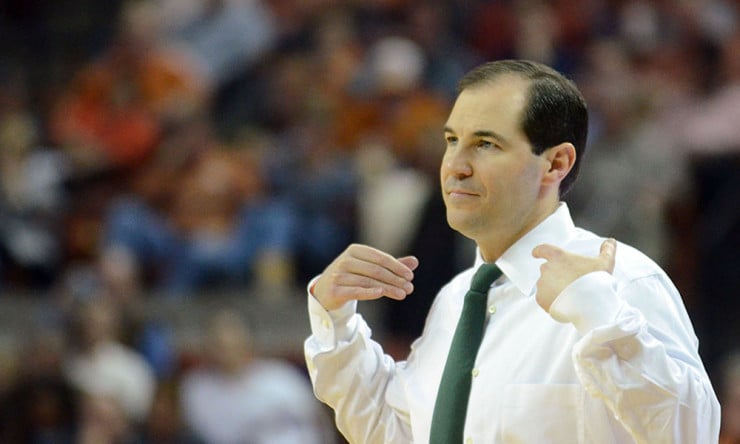 The loss of Isaiah Austin, Cory Jefferson and Brady Heslip would impact any program, but the Baylor Bears have managed to turn low expectations into a special season. Picked to finish sixth in the Big 12, the Bears have stormed to a 21-7, 9-6 record and a #19 national ranking, thanks in big part to a lock down defense conceding 0.81 PPP or 59.2 PPG, good for 22nd in the country. Baylor has reeled off four wins over top 25 opponents. Offense by committee has been another trend and with seven players averaging between eight and 13 PPG, it’s hard to key on any one player when looking to stifle the BU offense. Rico Gathers has held it down in the middle to the tune of a double-double average (11.1 PPG, 11.9 RPG). Kenny Cherry (11.5 PPG, three RPG, four APG) and Taurean Prince (13.3 PPG, 5.5 RPG) provide the majority of the scoring and Royce O’Neale has a versatility that fills the stats sheet. Don’t sleep on Lester Medford, he can go Brady Heslip on the opposition. Opposing teams will look to take advantage of average transition defense and get numbers back to prevent easy baskets. Running a variation of the Lithuanian ball screen continuity, the Bears get a lot of movement on the offensive end, but if they are to make a deep run, they will need to be much more efficient scoring in the half court (0.845 PPP), which means getting downhill on pick and rolls to create easy baskets and open receivers. If they can do this and defend in transition, they will have a shot at getting past the first weekend.

Ladies and gentlemen, get ready to enjoy the R.J. Hunter and Ryan Harrow show. The two have been among the best players in college basketball this season and after winning the Sun Belt regular season and conference championship, we’re now going to get the chance to enjoy watching them play on the big stage. This is just the Panthers’ third tournament appearance and their first since 2001. You may remember Harrow, who was the starting point guard for Kentucky during the 2012-13 season. He struggled as a Wildcat, though, and opted to transfer once the Harrison twins committed to the program. The move has been good for him and especially vital for Hunter, whose workload would be overbearing if it wasn’t for Harrow. Hunter is quite possibly the best mid-major NBA Draft prospect; he has a legitimate chance to go in the first round, especially with a strong showing on the national stage. The Panthers obviously will go as far as this duo can carry them. Without those two playing at a high level, they don’t stand a chance, but they likely won’t be able to do it on their own. They went 0-3 against the RPI top 50, losing handedly to Iowa State, Colorado State and Old Dominion. Likely facing a team in that range, Hunter and Harrow have to make their teammates better and keep them involved in order to be in a position to survive and advance.