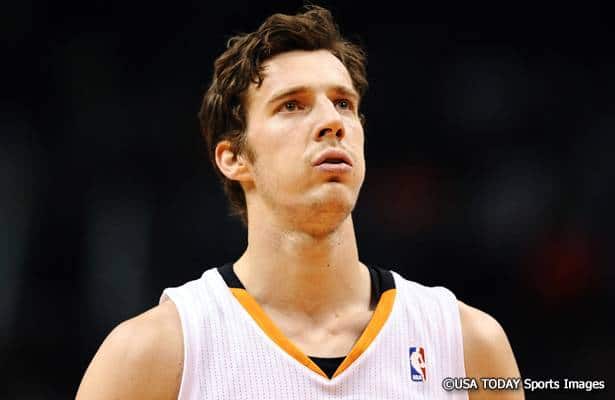 Entering the season, you would have needed to look far and wide to find anyone who pegged the Phoenix Suns as anything but a franchise headed for the 2014 draft lottery.

But games aren’t played on stacks of loose leaf paper or determined by early season hype.

As we approach the All-Star break, the Suns (29-19) are currently sixth in the Western Conference standings and look like sure bets to reach the playoffs for the first time since 2010. However, the club isn’t content, in the very least, to allow the unexpected success this season to run its natural course. The Suns have emerged as one of the franchises that are expected to become very active buyers as we near the February 20 trade deadline.

Recently, reports have steadily emerged linking Phoenix to former All-Star forward and current Los Angeles Laker Pau Gasol. While the Suns’ interest in Gasol is real, the aging forward isn’t the only asset they’re looking to secure for their playoff push.

Suns general manager Ryan McDonough is reportedly looking to acquire an All-Star level performer to complement Phoenix’s youthful core and the rising executive has the assets in his arsenal to potentially pull off something major.

As Eric Pincus of the Los Angeles Times recently pointed out,  the Suns could have up to four first-round picks in this year’s loaded draft class to dangle in a potential trade.

In addition to their own pick, which would be 23rd as of Monday’s standings, the Suns have Indiana’s selection. The Pacers have the NBA’s best record at 36-10.

Phoenix could also have the Minnesota Timberwolves’ first-round pick, although it is heavily protected.

If the Wolves finish with a top-13 selection, they keep their pick. The selection is also top-12 protected in 2015 and 2016.  If Minnesota’s first-round obligation isn’t met by 2016, the Timberwolves instead will send Phoenix a pair of second-round picks (2016 and 2017).

If the season ended Monday, Minnesota would hit the NBA draft lottery at 13, and would keep the pick.

Finally, the Suns are also owed a protected first-round pick from the Washington Wizards.

Washington is currently tied with the Chicago Bulls for fifth place in the Eastern Conference, four games ahead of the ninth-place Detroit Pistons. As of Monday’s standings, the Wizards would have either the 17th or 18th overall pick in the draft.

But perhaps the Suns’ biggest trade chip leading up to the deadline is the expiring contract of veteran center Emeka Okafor. The Suns acquired Okafor earlier this season from Washington but he has yet to play a game as he recovers from a serious neck injury.

However, interested teams in Okafor wouldn’t be expecting double-double contributions in the lineup. Okafor’s expiring deal is worth $14.5 million this season and, according to reports, insurance will take over payment on 80 percent of his remaining contract. Adrian Wojnarowski of Yahoo! Sports reports the insurance payout would be $5.7 million to any team that deals for Okafor prior to the looming trade deadline. With so many teams looking to shed future salaries or in the midst of rebuilding projects, Okafor could be an extremely hot topic of discussion over the next two weeks.

From a salary standpoint, the Suns have just over $53 million in guaranteed salaries on the books this season, which gives the club roughly $5.7 million in remaining cap space. Next season, the franchise has just $23 million committed but will have likely have to open the piggybank for emerging guard Eric Bledsoe.

Last season the Suns won just 25 games for the entire campaign. The club is currently on pace to post 50 wins in 2014.

For reference, here is a full list of the Suns’ draft pick swaps through 2015: