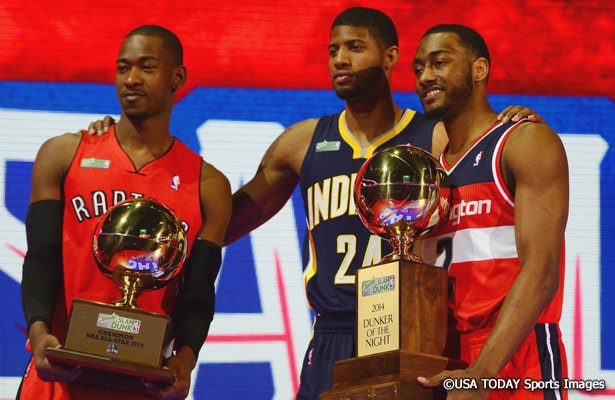 State Farm All-Star Saturday was, in a lot of ways, pretty successful, as long as we’re not counting the ridiculous new dunk contest format. A lot of emphasis this year was put on the rivalry between the Eastern Conference and Western Conference, not only because the league thought it would heat up the competition, but also because the players were fighting for over $500,000 for charities (the American Heart Association and Unicef for the East and the Wounded Warrior Project and Teach for America for the West).

The team concept was new, and while it really hurt the dunk contest (more on that later), it really didn’t make too much of a difference for the rest of the night, which went as follows:

Most of the TNT guys liked Team Curry heading into this thing, but Kenny Smith and Chris Webber picked the Hardaway crew. Despite those two teams being favorites to win, the half-court shot was a problem for both the Currys and the Hardaways. The father-son teams were the story heading into the Shooting Stars competition, but neither one of those father-son teams actually advanced to the final.

Team Bosh, last year’s winner, finished their first-round run it in a blistering 35.6 seconds, sending them to a final round against Team Durant.

There, Team Durant got it done in a respectable 43.6 seconds, but Team Bosh (which also included Dominique Wilkins and Swin Cash) did it in 31.4 seconds, which was even faster than their excellent first-round time and the best finish of the night.

Bosh, for what it’s worth, made both the half-court shots.

The Skills Challenge was a relay this year, making it the first time the winner of the event would be a duo rather than an individual.

Victor Oladipo and Michael Carter-Williams advanced to the championship for the Eastern Conference. Oladipo and MCW ended up winning the first round by 1.6 seconds. It wouldn’t be the tightest finish of the night, though.

Reggie Jackson sort of sauntered through his first-round run, which cost him and Goran Dragic the chance to advance. Damian Lillard and Trey Burke put up the best time of the first round, though both Western Conference teams were quicker than the two Eastern Conference teams.

The final was insanely close. Burke picked up some time at the end of his run and gave the West a victory by only 0.1 seconds. So Lillard earned himself a trophy, which seemed inevitable since he participated in three events on Saturday. At least he won one of them.

In the case of the Skills Challenge, the changes helped make things more interesting, though having more than one winner for any event feels wrong somehow. Not as wrong as three dunk contest champions, but wrong all the same.

With the evening’s appetizers officially consumed, it was off to the main course, which started with the Foot Locker Three-Point Contest. Tonight’s contests included Kevin Love, Damian Lillard, Marco Belinelli and Stephen Curry for the Western Conference and Arron Afflalo, Bradley Beal, Kyrie Irving and Joe Johnson for the Eastern Conference.

Like most of the other events at All-Star Saturday, the Three-Point Contest instituted a new wrinkle to help make things a little more interesting: the Money Ball Rack. Every shooter was given one rack full of money balls (worth two points each) that they could place at any of the five stations. That changed some guys’ strategies a little, but in the end the top two players flat-out hit the most shots in what ended up being a really exciting competition.

The Western Conference shooters kicked off the first round, beginning with former champion Kevin Love. He only made 1 of 5 from his money ball rack and had a disappointing showing with the lowest score of the round. Damian Lillard scored 18 points in his round but was knocked out by Marco Belinelli, who finished with 19 despite starting off extremely slowly and airballing two shots. Stephen Curry was everybody’s favorite heading into the competition for obvious reasons, but he didn’t hit enough shots in the first round to advance.

For the East, Joe Johnson moved at the speed of soil creep and didn’t make a ton of shots. He didn’t even get to shoot his last four balls because time had expired. Arron Afflalo had a great last rack (his money ball rack), but that accounted for over half of his points. It wasn’t a strong round for him, and neither he nor Johnson would advance. Kyrie Irving, the defending champion, had an underwhelming round, too.

All three guys were overshadowed by Washington’s Bradley Beal, who put up 21 points, the best score of the first round. Rapper Nelly exhibited the most excitement of the night to congratulate fellow St. Louis native Beal on his big showing, which led to Reggie Miller commenting that Nelly used to babysit Beal (which is true).

It was Bradley Beal vs. Marco Belinelli in the championship round. Belinelli somehow put up good numbers in both rounds while looking absolutely awful. Without counting the points, you’d swear he was in last place. Beal was having a pretty bad round himself until he hit all the balls on his last rack (and his last seven overall) to tie Belinelli. It was undeniably exciting and led to one more go-round to determine the champion.

Things were less exciting in overtime, though. Belinelli went first and put up a 24, the best score of the night, to take the title. Beal didn’t have a bad round, but Belinelli’s score was a tough one to beat.

Of all the tweaks in this year’s All-Star competitions, the changes to the Slam Dunk Contest were by far the least popular. Twitter practically exploded with criticism as the event was unfolding, and the exhibition itself felt a round too short and was extremely confusing for fans that have watched a completely different version of the dunk contest for years.

The major change essentially amounted to three Eastern Conference dunkers going up against three Western Conference dunkers, so that the “champion” of the competition would be three guys rather than just one. The public got to vote for a “Dunker of the Night,” but there were only two rounds this year: a freestyle round where all three guys on a team dunked together, and then a battle round where the players went head-to-head, one guy at a time, until a conference ended up winning three dunk battles.

The freestyle round was pretty boring. Using the conference teammates to possibly show some new forms of creativity in the competition was a good idea in theory, but in practice the whole thing was a snooze-fest. The East’s alley-oop off the shot clock was interesting, but there was nothing here to write home about.

Lillard’s between the legs dunk was probably the best from either team in the freestyle round, but Ben McLemore’s almost-botched reach dunk was pretty nice, too. There was no dunk anywhere in this round for either team that would’ve scored higher than a 45 in any previous year.

All three judges (Dr. J, Magic Johnson, Dominique Wilkins) tagged the Eastern Conference as winners of the freestyle round, which made sense. Those guys made more of their “team” dunks and generally looked more cohesive as a group than the West.

To kick off the battle round, Terrence Ross brought in last year’s trophy and hip-hop artist Drake to introduce his first dunk. Even before dunking, he was more interesting than Damian Lillard, and the East won the first battle.

For his turn, Harrison Barnes did very little to be memorable, other than have his dunk immediately replicated in an NBA 2K14 simulation. Paul George’s reverse through-the-legs 360 would’ve been unbelievable had he thrown it down on the first try, but by the time he actually got it, some of the electricity had come out of his leap. Still, he mopped the floor with Barnes, and the East took the second battle, too.

Ben McLemore came out with a herald and Shaquille O’Neal to make a royal announcement for the third battle of the night. McLemore executed an impressive leap over Shaq sitting on a throne that, while not quite as impressive as Blake Griffin jumping over a Kia, was fun all the same. John Wall, however, jumped over his mascot and double-pumped home the dunk of the night. Making it on the first try helped the wow factor, and the East took another battle dunk. Game over.

So three guys won the dunk contest this year, which is unbelievably awful. John Wall was voted “Dunker of the Night,” but it’s hard to get excited about that. This new format was absolutely horrible, and Twitter’s displeasure throughout the event was comically palpable. There was no reason that the three Eastern Conference dunkers—John Wall, Paul George and Terrence Ross—couldn’t have gone for one more round to determine a true champion, but with this kind of talent there was really no reason to change the format in the first place.

Chances are very strong that the league will do something different next year, because this was decidedly not a success. It was all over entirely too quickly, and this format didn’t do enough to showcase the best the dunkers could do.

Minus the dunk contest, though, All-Star Saturday was pretty exciting. Sunday is the main event, which is what fans have been waiting for anyway. That’s when the real party gets underway.