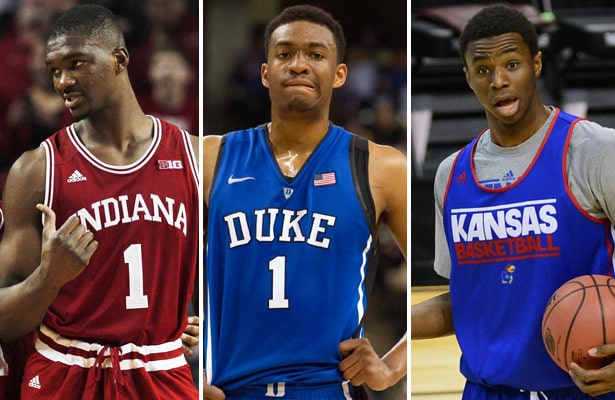 It’s finally here… the 2014 NBA Draft is Thursday and after weeks of projecting and mocking, it’s time to unveil the final Consensus Mock Draft of the season.

Four of Basketball Insiders’ top writers have been breaking down the latest news and notes around the 2014 NBA Draft since the first week of May, including the latest news, workout rumors and information from in and around the process.

So this is finally how we see it:

Yannis’ Notebook: For just the third time since 1994, the Los Angeles Lakers will be drafting in the lottery on Thursday night, or at least that’s where they’re projected to pick as of right now.

Perhaps more so than any other team picking in the top 14, the Lakers are determined to make this another rare trip to the lottery – so don’t be surprised if their draft pick never actually makes it onto their roster.

The Lakers are going into free agency with the highest aspirations, hoping to try to lure LeBron James and Carmelo Anthony to join forces with Kobe Bryant and immediately rise back to contention.

What they do on draft night could tip their hat over just how confident they are in that plan. If they end up moving the pick off for very little in return, perhaps to help rid themselves of Steve Nash’s $9 million expiring contract, then they’ve likely received at least some sort of indication that their game plan is feasible.

If they address two of their biggest positional needs, like power forward or point guard and hold onto them through the night, they’ll likely be a part of the foundation moving forward. The Lakers have long been in need of an influx of young talent, so this wouldn’t be the worst case scenario for them. Although they have a limited body of work in the lottery, they are 2-for-2 with Eddie Jones and Andrew Bynum, who both developed into major contributors, the latter serving as the center piece for two championships.

However, the preference for the Lakers has always been to re-tool their roster through trades and free agency rather than rebuild around high draft picks.

There has already been a couple of significant rumors involving them, including trading the pick as a part of a three-way deal with the Minnesota Timberwolves and Golden State Warriors, in which they would acquire Klay Thompson. There was also a report that they could send it to the Philadelphia 76ers along with Steve Nash for Michael Carter-Williams and Thaddeus Young. Both rumors seem to have lost steam heading into draft night, but it’s clear that the Lakers are one of the more aggressive teams right now, both with their approach to the draft and free agency.

Alex’s Notebook: How far will Joel Embiid slip on draft night? That’s the big question that everyone is asking as the 2014 NBA Draft approaches.

If healthy, Embiid would likely be the first player off of the board because he’s one of the best big man prospects we’ve seen in recent years. He has made huge strides in his four years of playing organized basketball and he has so much potential.

But, of course, nobody is talking about Embiid’s on-court abilities these days. The narrative surrounding Embiid is his injured back and foot, which could severely limit him throughout the course of his NBA career.

So where will Embiid be selected when all is said and done? I can’t imagine him going in the top three, as it’s hard to pass on Andrew Wiggins, Jabari Parker and Dante Exum for damaged goods. If Embiid isn’t able to have an effective career and each member of that trio goes on to dominate, the general manager who selects Embiid will look horrible and nobody wants to have that on their resume.

So once you get outside of the top three, which situation makes sense for Embiid?

The Orlando Magic have avoided injured players during Rob Hennigan’s tenure as general manager, expressing zero interest in Nerlens Noel last year and passing on banged up big men like Brook Lopez and Andrew Bynum when they were trading Dwight Howard several summers ago. Not to mention, Orlando already has a center of the future in Nikola Vucevic, who has shown flashes of brilliance early in his career. The Magic have other needs and aren’t big on taking risks on injured players, so it’s hard to imagine them being the team that ultimately selects Embiid.

The spot that makes the most sense for Embiid may be the Utah Jazz. While there have been reports that the Jazz want to move up and select a perimeter player like Parker or Wiggins, if they end up stuck at No. 5, Embiid could be a great value pick for them.

Enes Kanter hasn’t exactly panned out as they hoped in recent years and the Jazz can be patient with Embiid – not only as he gets healthy but as he continues to develop. Because Utah isn’t a team that is going to be competitive anytime soon, they can ease Embiid into their program and give him all of the time in the world, much like the 76ers did last year with Noel.

Joel’s Notebook: The Chicago Bulls want to trade one or both of their picks ahead of tomorrow’s draft to preserve as much cap space as possible in their pursuit of Carmelo Anthony or LeBron James this summer, and while there are a number of ways they have explored trying to do that—packaging both for a single, higher selection, offering them in trades for veteran players, simply trading them for future first-rounders—so far, none of their overtures have panned out. That means there’s a good chance that Chicago makes two first-round picks that they don’t really want.

One way to keep their assets without having at least one of the picks count against the cap next year is to draft Dario Saric, the Croatian forward who signed a new contract with his European team just days before the 2014 NBA Draft. The new contract won’t let him come over to the NBA for two seasons, but that’s probably fine with Chicago, who not only needs the cap space but could also have a European rookie already coming over this season in Nikola Mirotic.

Taking Saric at No. 16 means they’d probably draft a true rookie at No. 19 (the less expensive of the draft selections), and there are several guys that could get a look from them there. Don’t expect them to draft a project, though, as Tom Thibodeau has little interest in projects and the Bulls need to milk production out of every player on the payroll, even the first-round pick. Shabazz Napier, Rodney Hood and Adreian Payne seem like the most logical picks there.

It’s possible they could draft-and-stash both picks, but taking someone like Walter Tavares or Bogdan Bogdanovic that high would be a waste of an asset when so many more highly-valued players are still available at No. 19. This is a player they could potentially trade later for Kevin Love or Anthony, so picking the right guy is still important, even if they’re not thrilled about having to make a pick there.

Of course, it’s not too late to make a trade, and Chicago will undoubtedly try to do so. If they’re stuck with the picks, though, this seems like the most reasonable course of action for them.

Steve’s Notebook: So all the hype, all the intrigue and all the guessing comes to end tomorrow. Fortunately, we still have today to speculate on what’s going to happen in the 2014 NBA Draft.

Here are some of the things we are hearing:

The Cavaliers are still more likely to keep the top pick than trade it. As one source close to the process stressed, the first order of business for any team in the draft is to identify the players they would take with a specific pick, then explore if they can do better in trade. There is a sense that the Cavs have some real offers for the top pick, which they are weighing, but equally with so much value being placed on the number one, that has the Cavs strongly considering keeping it. Historically, the Cavs have taken their draft day decisions down to the wire; this year may not be much difference.

It appears we have some commitments…

The Charlotte Hornets seem to have committed to Michigan big man Mitch McGary; he had one workout for them and shut down the process. Equally, his camp is apparently unwilling to share medical information with other teams.

The Chicago Bulls may have a commitment to Jordan Adams with the 19th pick, as he has been in to see them twice and their interest in him seems to be really high. It’s possible someone scoops him up before the Bulls get there, but Adams seems to be fairly locked in to the Bulls.

Creighton big man Doug McDermott’s floor seems to be the Charlotte Hornets at number nine. The Hornets have had McDermott locked in for most of the process. There is a sense that Sacramento could take McDermott at eight assuming their first few options are off the board, but should McDermott still be there at nine, it seems he’ll be a Hornet.

It appears we have some floors to talk about too…

Tennessee big man Jarnell Stokes may have a floor of No. 26 to the Miami HEAT. The HEAT have had Stokes in twice and are leaning in his direction. Stokes has drawn a lot of interest in the bottom of the first round with Memphis, Houston and Miami all said to be weighing him seriously with their first-round picks.

Syracuse point guard Tyler Ennis seems to have a floor of No. 20 to the Toronto Raptors. Ennis has serious interest from several teams in front of the Raptors but it’s believed that Toronto would be as far as he goes, if Chicago does not grab him at No. 16, assuming they keep the pick.

Louisiana-Lafayette point guard Elfrid Payton seems to have a floor of No. 12 to the Orlando Magic, although his camp believes he’ll be off the board before the ninth pick with the Lakers and Kings having expressed the most interest in drafting him.

And finally… Joel Embiid’s floor looks to be No. 10 to the Philadelphia 76ers, although there is real consideration for Embiid at five to Utah, at six to Boston and at seven to the Lakers. League sources have said there is still enough interest in Embiid’s upside that his uncertain injury status may get overlooked, but the big hurdle is not going to be persuading the basketball guys of his talent, it’s going to be getting the medical staff and ownership to sign off on him and that appears to be a mixed bag from team to team.

Basketball Insiders will have instant reaction to all of the picks in the first round, so as the picks happen on Thursday look for commentary, quotes and insight on each selection.

We will also be recapping all of the trades and transactions, as well as offering initial draft grades.

To stay current with everything that’s going on, make sure to check out the 2014 NBA Draft Day Diary, which will be updated throughout the next two days with all the news rumors and notes – all in one place.