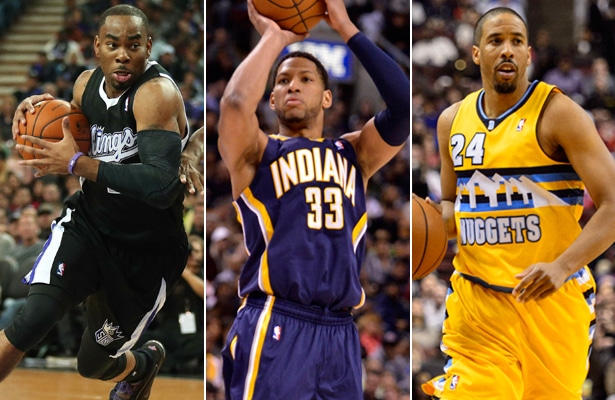 The Nets are hoping that Thornton will provide a scoring punch coming off of the bench to help solidify their place in the East. “Marcus is a proven scorer in this league,” Nets GM Billy King said. “He is a young talent who will help us in the back court.” Thornton is having a down year, averaging just 8.3 points per game this season. A change of scenery could be what’s needed to help Thornton return to form and produce like he did three seasons ago when he averaged 21.3 points per game.

Because the Lakers are having a down season, they were willing to trade Blake and his $4 million contract. The Lakers were able to move his contract and save some money, while bringing in young players at the same time. It seemed that this would be the first of several moves for the Lakers that would allow them to get under the luxury tax, but surprisingly no other moves were made. Blake will add a much needed scoring option off of the bench for Warriors, who are second to last in bench points per game.

This is a great deal for both teams involved. With the 76ers are in a rebuild, the team gets young players as well as draft picks in return. Meanwhile, the Cavaliers have won six games in a row and are just three games back of the playoffs, so adding Hawes will help them in their late-season push as he is a veteran big man who can make an immediate impact.

The HEAT wanted an open roster spot and got just that when they shipped Mason off. They will be looking to add a free agent in the coming weeks. They will have plenty of options once teams starting buying out players. The Kings will likely buy out Mason’s contract.

Prior to the season, the Wizards were in the market for a backup point guard, and eventually signed Maynor to a two-year deal. Maynor responded by turning in his worst season as a pro, leading the Wizards to trade him for the more experienced Miller. The Wizards hope Miller can do what Maynor couldn’t, providing solid minutes and production in a backup role. Miller, on the other hand, has wanted out of Denver for quite some time now, so this trade will give him his wish and a fresh start on a likely playoff team.

The Bobcats are looking to make the playoffs for the first time since 2010 and wanted to add additional guard depth to their roster.

Brooks will provide true point guard help for the Nuggets with Ty Lawson and Nate Robinson out due to injury. Hamilton will be another shooter for the Rockets, and Hamilton should do well in their in-and-out offense centered around Dwight Howard.

This move was made entirely out of salary cap motivation, as it will save the Clippers more than $2 million in luxury tax savings. The Hawks are expected to buy out Jamison’s contract.

The Pacers shocked everyone with a last minute deal to trade away Granger, who was their longest tenured player. Turner figures to provide immediate help for the Pacers’ offense as he was averaging a career-high 17.4 points per game. The deal made sense for both sides as the 76ers will acquire Granger’s expiring contract and get something in return for Turner, who they weren’t likely to bring back next season.