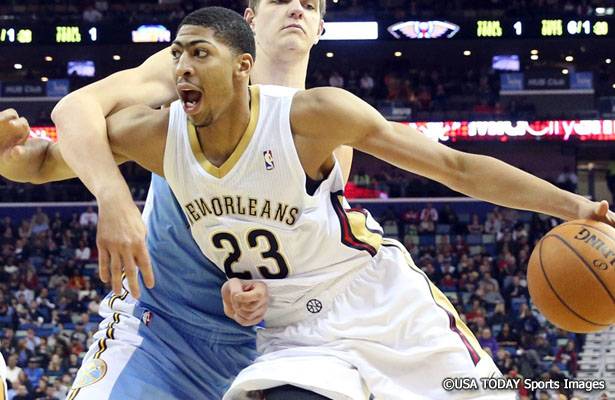 Goran Dragic, Phoenix Suns – The Suns are easily the surprise team of the year in the Western Conference, currently sitting nine game above .500 and in the sixth seed. One of the primary reasons for the Suns’ dramatic turnaround is the play of point guard Goran Dragic. Averaging 19.7 points per game while shooting 50 percent from the field and just under 39 percent from three, Dragic has been nothing short of brilliant this season.

Mike Conley, Memphis Grizzlies – The Grizzlies stumbled out of the gate to start the season and struggled to get in gear while Marc Gasol was out with an injury, but through all of that floor general Mike Conley has very quietly been putting together a career year. Averaging 18.2 points and 6.3 assists while shooting a career-best 46.2 percent from the field, a strong argument can be made that Conley is due for an appearance in the NBA’s premier event.

Anthony Davis, New Orleans Pelicans – You don’t hear a lot about Anthony Davis, which is surprising since he was the top pick in his draft class and is proving on a nightly basis that he was deserving of the top spot. Averaging 20.4 points, 10.4 rebounds and 3.3 blocks per game, Davis is emerging as one of the best big men in the game on both ends of the floor. Add to it that he plays for All-Star host New Orleans, and it’s clear that Davis should have been on the West roster. Davis is the top candidate to be Kobe Bryant’s injury replacement.

DeAndre Jordan, Los Angeles Clippers – Though the NBA is quickly moving away from the era where centers dominated the league, there is still a great need for players who control the glass and intimidate opposing players. Few do those two things as well as DeAndre Jordan, who handles the dirty work for the Clippers so stars Chris Paul and Blake Griffin can be more effective. Considering how few really good centers there are in the NBA, Jordan would seem like a natural choice for the All-Star game.

Tim Duncan, San Antonio Spurs – There is a strong argument to be made that Tim Duncan is the greatest power forward of all-time, and while he is no longer the dominant presence he once was, the Spurs still very much go as Duncan goes. He’s the last one to want to be a part of the All-Star fanfare, but being there symbolizes that he is one of the best, and he has absolutely earned that honor.

DeMarcus Cousins, Sacramento Kings – Kings fans are no doubt indignant that their budding young star was left off the All-Star roster this season, and his numbers certainly warrant consideration. Averaging 22.6 points, 11.6 rebounds and even 3.0 steals per game, Cousins is having a banner year. The issue is not his numbers, but rather the behavioral outbursts that have defined his young career. This is something that coaches (who select the reserves) look down on, and making him an All-Star might add fuel to the burning fire of Cousins’ oppositional mentality. Also, it would help if the Kings weren’t one of the worst teams in the league.

»In Related: Who Are the Rising Stars Challenge Snubs?

Which Western Conference snubs did you think were the most glaring? Drop them in the comments section.