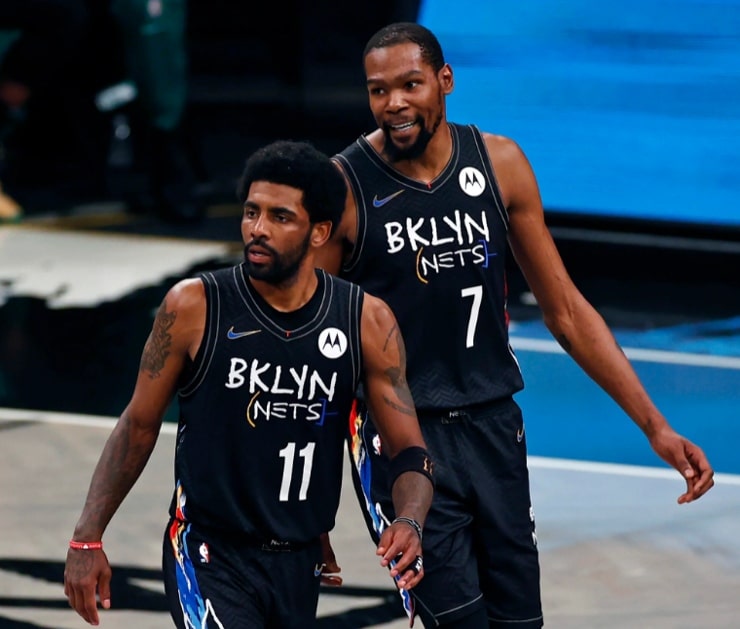 In the second installment of Basketball Insiders’ divisional preview series, let’s take a look at the Atlantic Division’s hierarchy. Can the Brooklyn Nets deliver on their stacked roster and deliver a championship to Brooklyn? How will the Ben Simmons saga end? Let’s jump in.

Not to be complacent, the Nets gutted their bench this offseason in a series of moves that set them up to be even more competitive than last year. Firstly, the big man rotation is set to be miles better than it was last year when DeAndre Jordan was seeing big minutes. LaMarcus Aldridge is a question mark given his health but he looked like a strong piece in the few games he played with Brooklyn after his buyout last season. Between him and Millsap, the Nets have two competent and skilled veterans that can score at the four.

The team also brought James Johnson on board in one of the more underrated signings of the offseason. Johnson isn’t going to fill the stat sheet but has the experience of guarding positions one through five and he even played a bit of small-ball center in Miami. It seems like that versatility is something that Brooklyn favored with some of its signings around the edges. DeAndre’ Bembry was one of Zach Lowe’s Luke Walton All-Stars last season; he’s a hard-nosed defender that has a real chance to stick.

Brooklyn also nailed the draft, nabbing five players to develop and bring up as role players though two, Marcus Zegarowski and RaiQuan Gray, remain unsigned. Cam Thomas is an outright bucket. Brooklyn is the perfect landing spot for him because he can be a vacuum scorer when the big three of Kevin Durant, James Harden and/or Kyrie Irving has to sit out, which they will. Meanwhile, Day’Ron Sharpe and Kessler Edwards have extremely high ceilings, with Edwards, in particular, being a steal on a two-way deal.

Adding Patty Mills to this haul is just the cherry on top. Last season with the Spurs, Mills averaged 10.8 points while connecting at a 37.5 percent clip on 6.3 attempts per game. In those 68 games, Mills started just one, and he’ll be accepting a similar sixth man role with this contending juggernaut.

If that wasn’t enough, Brooklyn also retained Blake Griffin and Bruce Brown Jr., two of its most important role players from last season. Last season, per 36, Griffin averaged 16.7 points, 7.8 rebounds, 4.1 assists and 2 stocks per game while shooting 49.2 percent from the field and 38.3 percent from deep. And we all know how important the positionless Brown was to the team’s run.

Despite the strong offseason and on-paper dominance, there are still some questions surrounding the team. Can the big three stay healthy? No one can say that for sure and it certainly doomed the team’s chances of a title last year. Also, Kyrie Irving is going to be kept away from the team until he’s either vaccinated or the state’s mandates change. However, the Nets are so deep and so skilled, featuring two of the top 10 players in the league, it won’t be enough to slow this train down.

The Boston Celtics have a chance to be significantly improved this season by simply having luck with the health of their roster. Jaylen Brown and Jayson Tatum missing huge chunks of last season sunk the team’s chances of getting back to the Eastern Conference Finals and the team could never get it together.

One of the best additions this team made was trading Kemba Walker for old friend Al Horford, who rejoins the team for his second stint. Horford won’t be nearly as dominant as he was in his first go-round with the team but he adds a nice complementary stretch big that can teach plenty to Robert Williams III, who will try to build on his breakout season.

Adding Josh Richardson was also nice, and he should have the benefit of playing with the ball in his hands more with the Celtics instead of being forced into off-ball roles like in Dallas or Philadelphia. Boston also managed to add Juancho Hernangomez and Dennis Schroder for basically nothing and, though he had to take a pay cut, Schroder is a far better fit for Boston than Walker ever was.

There’s a lot to like about this Celtics squad. With good health and the continued growth of Tatum, Brown and Williams, as well as a potential breakout of one of the team’s younger players like Aaron Nesmith, Romeo Langford or Payton Pritchard, and there’s no reason this team can’t compete for a top-four seed in the east.

There’s no doubt that, on paper, the Philadelphia 76ers are a more talented basketball team than the Boston Celtics. That being said, there is a massive aura of uncertainty facing this team heading into the season thanks to the question mark surrounding Ben Simmons. With Simmons’ trade demand, the package that Philadelphia can get in return is anybody’s guess. As of now, this placement in the power rankings assumes that Simmons isn’t traded and instead holds out, disrupting chemistry.

Of course, if Simmons is traded to a team like the Minnesota Timberwolves or the Sacramento Kings, the Sixers would leapfrog the Celtics in these rankings. D’Angelo Russell makes the Sixers extremely dangerous, but if he isn’t included, Malik Beasley wouldn’t be a terrible consolation prize. Similarly, getting one or both of Marvin Bagley II or Buddy Hield from the Kings would make this team scary.

As of now, let’s focus on what’s here. Most importantly, Philadelphia retained one of its more underrated players from last season in Danny Green and it seems as though Furkan Korkmaz will play a bigger role for the team. The team added Andre Drummond and Georges Niang in free agency, potentially downgrading at the backup center position from Dwight Howard but improving its bench depth by adding Niang, an underrated and versatile forward.

Philly had a successful draft, adding Jaden Springer, who many thought could go much earlier in the first round, and nabbing Charles Bassey in the second. Aaron Henry was also a nice find as an undrafted free agent and, pending the severity of his recent injury, Grant Riller is a bucket that can play right away.

Where Philadelphia is going to see the bulk of its improvement is through the younger players on its roster. Tyrese Maxey showed star potential in his first season and will take the reins of the point guard position while Simmons holds out. Last season, Maxey posted season-highs of 39 points, 8 assists and 7 rebounds, showing that when given the chance, he could erupt on a dime.

Matisse Thybulle is another player that will earn significantly more minutes and, as a result, should take off. Thybulle is a Defensive Player of the Year candidate, no questions asked. It’ll also be curious to see what the Sixers do with Isaiah Joe and Paul Reed and if either can earn playing time after their impressive rookie seasons.

In all, the Sixers have one of the widest ranges in the league. If everything goes right and they net a nice trade package for Simmons, they should have no problem earning a top-three seed in the east. If not, it could be a rocky path and look a little something like what we saw two years ago.

The Knicks won’t be a bad team this year by any means, and while their astronomical ascension last season was astounding to watch, it’s probably good to temper your expectations for this season. Firstly, several teams that New York surpassed dealt with bad health all season, namely the Miami HEAT and the Celtics. If those teams stay healthy, and Milwaukee, Brooklyn, Atlanta and Philadelphia stay relatively the same, it’s not hard to imagine New York in the play-in tournament despite a strong offseason.

The additions of Evan Fournier and Kemba Walker are great. Walker will be able to split reps with Derrick Rose and gives the Knicks the most competent point guard play it will have seen in years. Signing Fournier to a four-year, $73 million deal seems steep, but that’s simply the price you pay for 17-point-per-game wings in this league.

The draft choices of Quentin Grimes, “Deuce” McBride and Jericho Sims were also quite strong, even if none of them carve out a role this season.

Expect a huge jump from R.J. Barrett this season. If he ascends as high as he can, the Knicks could maintain their top-four standing this season. Barrett is without a doubt one of the biggest candidates to win the Most Improved Player award.

The big story surrounding the Toronto Raptors this offseason was the departure of franchise icon Kyle Lowry, sent to the Miami HEAT as part of a sign-and-trade deal that sent Goran Dragic and Precious Achiuwa back to Toronto. The Raptors did an excellent job of getting value out of Lowry and though Dragic may not spend much time in Toronto, he will still likely get the team some value back.

This is very much still a rebuilding year for Toronto, figuring out which of their young pieces can carve out chunks of playing time. Fred VanVleet and Pascal Siakam will continue to do their thing, but guys like Malachi Flynn and Gary Trent Jr. will look to continue proving themselves after strong first years in Toronto.

The Raptors also did a fantastic job with their draft picks; Scottie Barnes looks every part of a star even if his selection was a surprise and Dalano Banton, David Johnson and Justin Champagnie all offer a blend of versatility and length. If everything goes perfectly, there is a chance of a surprise postseason appearance for this franchise. But more importantly, the team will focus on its budding young corps.

Be sure to stay tuned to Basketball Insiders for the next edition of our divisional breakdown, where we will be looking at the Central Division.