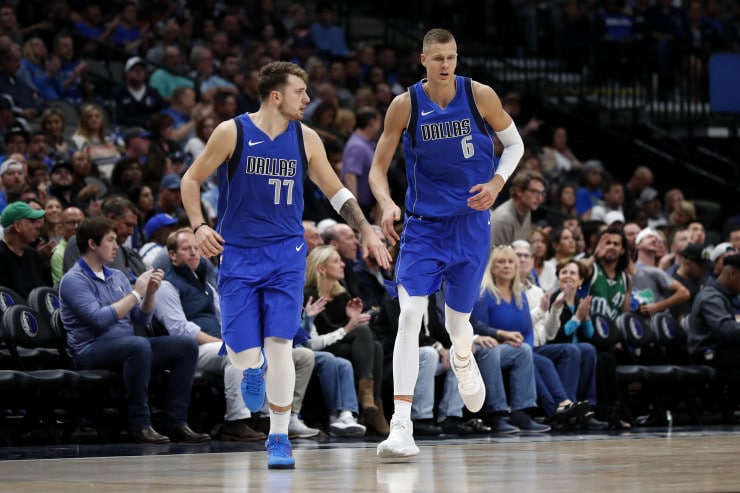 After completing the divisional preview of the Eastern Conference, Basketball Insiders will take a look at the west coast, beginning with the Southwest Division. The common theme among all the southwest teams is youth movement to varying degrees. Let’s take a look at how each group is coming along ahead of the season.

There are still plenty of questions surrounding the Dallas Mavericks, but there’s little argument that they enter the season as the favorites to win this division. At the forefront of everyone’s attention is how the dynamic duo of Luka Dončić and Kristaps Porziņģis will mesh on the court. There’s no question Porziņģis regressed toward the end of last season but he did still average 20.1 points and 8.9 rebounds per game while shooting 37.6 percent from deep.

There were talks in the offseason that Porziņģis was a negative trade asset and it seemed as if the team was trying to unload him. Despite a front-office overhaul, Porziņģis remains, and in spite of his awful 13.1-point-per-game showing, the trade talks always seemed overblown. The fact of the matter is that this season will determine his future in Dallas and the feeling is that he will get back to his normal ways.

New Mavericks general manager Nico Harrison had an overall successful offseason, re-signing Tim Hardaway Jr. after his breakout playoff performance and adding good rotation guys in Reggie Bullock and Sterling Brown in free agency. Despite not having any draft picks in the 2021 class, Harrison managed to infuse the Mavericks with youth by adding Moses Brown and Frank Ntilikina, snagging JaQuori McLaughlin and Eugene Omoruyi as undrafted free agents, and then funneling EJ Onu, Carlik Jones and Feron Hunt to their G League affiliate. All of those undrafted free agents ranked higher on my big board than consensus.

The Mavericks didn’t make any huge changes to their makeup but the feeling is that Dončić will emerge as a legitimate MVP candidate this season and that the team’s corps will grow and become one of the top teams in the west.

This is make or break time for the Pelicans. They had to nail this offseason or else the franchise risks losing yet another No. 1 overall pick to bad personnel and front-office decisions. The results were… uninspiring to say the least. Roster decisions aside, rumors swirled about how badly the last coaching cycle was handled, how David Griffin is as a general manager and Zion Williamson’s general unhappiness with the franchise’s inability to get to the postseason thus far.

The Pels’ offseason was a mixed bag. The team made big win-now moves by acquiring Jonas Valančiūnas from the Memphis Grizzlies, someone who looked like one of the best role players in the league last season while averaging 17.1 points and 12.5 rebounds per game and shooting 59.2 percent from the floor and 36.8 percent from distance.

That same move led the team to move down in the draft and select Trey Murphy III out of Virginia. Murphy was an outright fantastic pick for this franchise. While he’s on the older side, he’s a shooter that will help out immediately and the Virginia product might end up being the best shooter in his class. The Pels also picked up an excellent defender and team guy in Herb Jones in the second round, another win-now pick.

However, the good stops around there. Despite showing immense growth, the Pels decided it was time to move on from Lonzo Ball. While the decision not to pay the guard is fine in a vacuum, the franchise replaced him with Tomáš Satoranský and Devonte’ Graham. While both of those players are fine, neither brings the playmaking or defense provided by Ball.

Unless Kira Lewis Jr. steps up big time, or Nickeil Alexander-Walker continues on the growth he showed at the end of last season and transitions to floor general, New Orleans doesn’t have an elite answer at point guard as it stands.

So how does New Orleans find itself as the No. 2 team in these rankings? For starters, Williamson looked outright spectacular in his first full season. The man averaged an insane 27 points, 7.2 rebounds and 3.7 assists per game. If he continues to grow like this, he’ll be All-NBA in no time. And that’s exactly what New Orleans needs.

The Pelicans have what it takes to get over the hump this season, but there are still so many intangible personnel questions, as well as rotation questions, that persist. As it stands, the Pelicans top out as a play-in team.

The selection of Ziaire Williams was indicative of that. While he has the makings of a potential star, he struggled with inconsistency and was plagued by personal issues and his team’s bout with COVID-19. He won’t be ready this season to put up big numbers, but he absolutely has the potential to.

Memphis also downgraded at the center position by swapping out Jonas Valančiūnas for Steven Adams in the same trade with New Orleans. While Adams isn’t bad by any means, Valančiūnas’s energy was big for the franchise. The only other moves the Grizzlies made were around the edge, taking Santi Aldama late in the first and acquiring guys like Jarrett Culver, Kris Dunn and Sam Merrill in salary-dumping moves. Though the choice to ship out Grayson Allen was questionable.

Where Memphis is going to jump is through the growth of its young corps. This team absolutely has the makings of a playoff team with the likes of Ja Morant and Jaren Jackson Jr., but if the rest of the pieces around them fail to rise to the occasion, the other hungry teams in the west will happily surpass them.

The Spurs made the choice to completely pivot toward their youthful corps this offseason, letting Keldon Johnson, Derrick White, Dejounte Murray and company to take the reins. By letting DeMar DeRozan go to the Chicago Bulls, San Antonio is entering its first season in decades without an established All-Star leading the way.

Don’t expect that to last for long. Johnson has a significant chance to become the league’s Most Improved Player coming off a season in which he averaged 12.8 points and 6 rebounds per game. The most valuable experience the young forward out of Kentucky got was in the offseason, when he was named as replacement player to the United States Olympic men’s basketball team. That experience will go a long way in determining Johnson’s trajectory as a potential star.

San Antonio’s other young players have serious potential as well. Murray’s defensive dominance is well-documented and his 15.7 points, 7.1 rebounds and 5.4 assists per game last season were the best marks of his career. Devin Vassell and Lonnie Walker IV have looked like excellent high-end role players, with Vassell showing off some elite on-ball defense and Walker being a legitimate bucket.

The reality is that San Antonio lost a 21.6-point-per-game scorer in DeRozan as well as mainstays LaMarcus Aldridge and Rudy Gay either late last season or in free agency. That’s nearly 50 points per game of production and it will need to be replaced. Look for these young guys to all take major leaps this season without many veterans in the way.

San Antonio did add Doug McDermott and Thaddeus Young but both of those players are perfect complements to the young corps, especially McDermott with his innate ability to stretch the floor. The Spurs also added to their young group by taking flyers on Australia’s Jock Landale and former Portland first-rounder Zach Collins, as well as Joe Wieskamp, who looked like one of the best shooters in the draft class.

The most important addition to the team, however, is young guard Josh Primo, the youngest player in the entire NBA. Primo isn’t expected to play much in his first season, but he has insane hand size, height and the wingspan necessary to be a true star even if it takes some time. And hey, it might not take that long. Primo scored 17 points on 7 of 8 shooting in his preseason debut.

While the Spurs have a bright future and exciting group, it’s evident this season will be used to develop camaraderie and chemistry. However, it will most likely come at the expense of wins right now.

Houston knocked it out of the park in the most important part of their offseason in the draft. The team snagged four guys that each had lottery consideration at some point in the pre-draft process. Jalen Green is the most prolific of those guys and seems primed to lead the draft class in scoring. He’s so energetic and is a threat all over the court, with an astonishingly high 78.3 percent of his finishes coming in transition.

Alperen Sengun is another guy that will see a big role in Houston’s rotation early on. There’s no reason that he should have fallen out of the lottery after averaging over 19 points in the second-hardest league in the world as an 18-year-old. He still has a long way to go in terms of polishing his game but he has one of the highest ceilings in the entire draft.

Then there’s Usman Garuba and Josh Christopher. Whereas Green is perhaps the draft’s best offensive player, Garuba may be the defensive equivalent with his fantastic switchability and quickness. Meanwhile, Christopher dominated the pre-draft process, putting up 28 points, 14 rebounds, eight assists and four steals as a 6-foot-4 wing in just 49 scrimmage games minutes.

That’s what this season is going to be about: The development of the young corps. Houston already had an impressive young group last season. Whether it be Kevin Porter Jr.’s 50-point, 11-assist outburst, Christian Wood’s All-Star level season or Jae’Sean Tate and Kenyon Martin Jr. coming onto the scene as legit role players, last season was extremely promising. With such an impressive young group, Houston has one of the most fascinating ceilings in the entire league.

And while Houston was competitive even after shipping out James Harden, the team is fully committing to its young corps and is phasing out its veterans. John Wall has already agreed to stay away from the team while the franchise looks for a new home for him and Eric Gordon and D.J. Augustin both seem to be on the way out.

The Houston Rockets may be must-watch TV, but it will definitely come at the expense of wins.

Be sure to stay tuned to Basketball Insiders for the next edition of our divisional breakdown, where we will be looking at the Pacific Division.