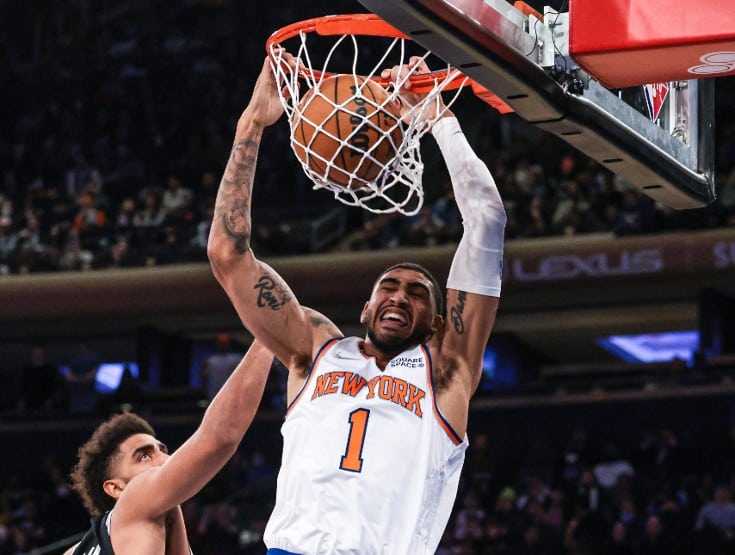 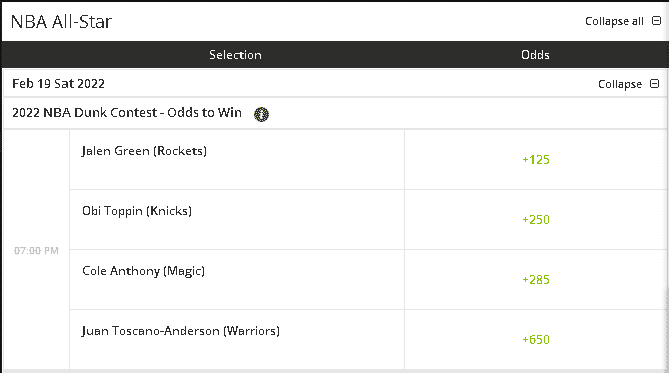 Jalen Green is the favorite to win, but this is not stopping bettors from putting money down on Juan Toscano-Anderson. Unlike a typical NBA game, the underdog has a better chance of winning during All-Star Weekend. NBA Slam Dunk Contest participants are guilty of overthinking their routines, and of course the judges are strict on execution. For that reason alone, Nate Robinson is the only player in the league’s history to win the NBA Slam Dunk Contest three times (2006, 2009, 2010).

Furthermore, the odds are roughly the same for each competitor from one sportsbook to another. However, MyBookie oddsmakers are giving Obi Toppin +170 odds of winning the contest. Toppin is more than capable of upsetting Green. In the 2021 NBA Slam Dunk Contest, the forward kicked off the competition by successfully completing a between-the-legs dunk. Though, with a final score of 3-2 in the final round, Toppin came up short against Anfernee Simons.

The Knicks’ player will have to find a way to top his between-the-legs, switching-hands dunk this time around. From the point of view of the average NBA fan, it was enough to win. What else can a player do to help spice up the dunk? Perhaps, a participant will have to jump over a boat or car to impress the judges the most. Case in point, Blake Griffin jumped over a Kia to win the 2011 NBA Slam Dunk Contest.

Needless to say, the most creative dunk will likely win the contest. By now, the judges have seen pretty much everything. Julius Erving, Michael Jordan, Mike Conley, Serge Ibaka and Zach LaVine — all of these NBA players have dunked the ball from the free throw line. This accomplishment is worth bragging about. At the 2017 Slam Dunk Contest, Derrick Jones Jr. jumped over four people. Of course, Glenn Robinson III went on to win the competition.

Anyways, expectations are high for Jalen Green. There are players out there that perform worse under pressure. An alley-oop is fun to watch during a live game, much like the tomahawk, elbow hang, windmill, reverse dunk and other ones. Nonetheless, judges want to see originality nowadays. When all eyes are on the player, it comes down to putting nerves aside and focusing on executing the dunk. Personally, Obi Toppin has Slam Dunk Contest experience, and he could use this to his advantage.