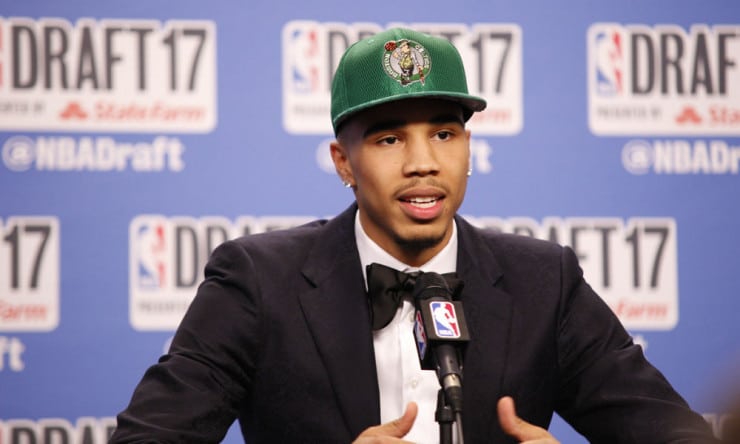 With the No. 3 pick in the 2017 NBA Draft, the Boston Celtics select forward Jayson Tatum out of Duke.

For the second consecutive year, Boston selects a wing player with the third pick in the draft after taking Jaylen Brown last June.

At 6-foot-8 with a 6-foot-11 wingspan, Tatum brings unique length and athleticism to the defensive end that can translate into guarding multiple positions on the court.

Along with length, Tatum brings to the Celtics is another legitimate scoring option to an offense that was too often shouldered solely by Isaiah Thomas last season. During his freshman season at Duke, Tatum averaged 16.8 points and 7.3 rebounds a game, while shooting 34 percent from three-point range.

The Celtics acquired the No. 3 pick from the Philadelphia 76ers on Monday along with the 2017 Los Angeles Lakers pick (which the Sixers owned) should the pick fall between the No. 2-5 selections for the top overall pick in this year’s draft. If that Lakers pick does not convey to Boston next season, the Sixers will send the 2019 Sacramento Kings pick with a No. 1 overall pick protection.

By bringing Tatum into the fold, the Celtics add an elite young talent to a team that won 53 games and the top overall seed in the Eastern Conference last year.

Dennis Chambers is an NBA writer in his first season with Basketball Insiders. Based out of Philadelphia he has previously covered NCAA basketball and high school recruiting.