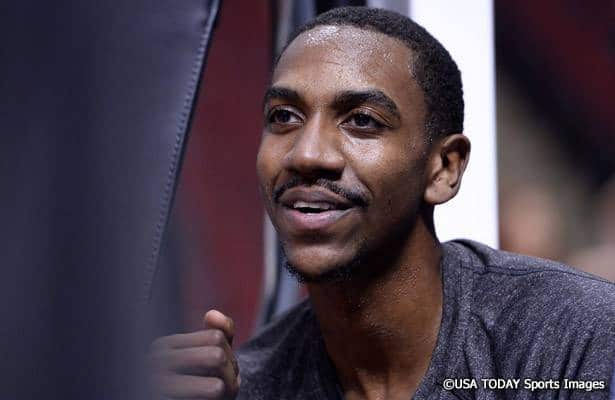 While it won’t be made official for a couple more days, the Chicago Bulls on Saturday agreed to send Marquis Teague to the Brooklyn Nets for Tornike Shengelia. TyShawn Taylor also heads to New Orleans in exchange for a conditional second-round pick in a separate deal.

Despite the fact that Chicago has hit the jackpot on late first-round picks during its stint the last few years as one of the league’s best teams (Taj Gibson, Jimmy Butler and perhaps Tony Snell), Teague, the 30th overall selection in 2012, never really found his way with the Bulls, despite having plenty of opportunity the last two years with Derrick Rose out. In fact, this year, Teague has spent much of the season in the D-League.

So, the Bulls send him to Brooklyn in a deal that will save them a little over $285,000 this year and another $1.12 million next season assuming they choose not to extend Shengelia a qualifying offer. With this move and the seemingly imminent amnestying of Carlos Boozer, the Bulls should have a little over $15 million in cap space this summer.

As for Brooklyn, they underwent what they clearly consider an upgrade at the third-string point guard position, swapping out Taylor for Teague. While the early returns on Teague have been a little disappointing, he’s still only 20 years old with plenty of room for growth. Considering the Nets have spent the last 12 months shedding first-round picks like they were flea-riddled blankets, getting a young player with some measure of promise was something they clearly felt was worth the gamble.

Taylor’s qualifying offer and Teague’s guaranteed money next year were almost identical, so it’s not like Brooklyn is taking on any extra money in the deal (though if that were the case, would it have stopped them?). They went for young talent and are hoping to reach a really fast little guard in a way that Tom Thibodeau simply could not.

Chicago gets some more cap relief, Brooklyn gets a young player with potential and New Orleans gets a player they clearly feel is more of a sure thing than the second-round pick they gave up. It’s not an earth-shattering deal, but it’s one that makes sense for everyone involved.