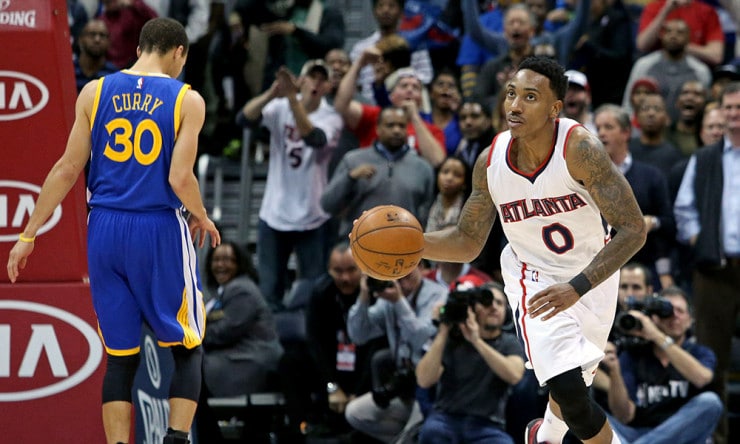 Hawks Hope to Get Back on Track

The Atlanta Hawks have grown accustomed to winning at a high percentage this season, so they aren’t used to losing many games.

The Hawks’ strong start was one of the most surprising storylines of the 2014-15 NBA season, but their rise to the top has left many wondering if they are for real.

Success and the Hawks have gone hand-in-hand in recent years. This, after all, is a team that has made the playoffs in eight consecutive seasons (including this season). Impressive as that may seem, they have yet to make it past the second round and had failed to post higher than 53 wins in any of those seasons.

The Golden State Warriors have won 60 games and clinched the first overall seed in the NBA’s ever-competitive Western Conference. Somehow, they managed to do this before April 1, which is even more than amazing – it’s unfathomable.
All things considered, though, the Warriors winning the NBA championship may be unfathomable as well, though not for lack of talent.

Make no mistake about it: From top to bottom, the Warriors have proven to be arguably the best team in the entire league. It is often truly stated that you are as good as your record says you are, and Golden State’s record just so happens to say that they are the best.

Jackson Out of Westbrook’s Shadow

Before a recent Chicago Bulls home game, a couple of players in the visiting locker room were watching tape of a game between Chicago and the Detroit Pistons. But rather than focusing on the team and players they were going to be facing that night, both had their eyes glued to Pistons point guard Reggie Jackson.

“That kid is really, really good,” one of the players said. “He doesn’t look like much, but you have no idea just how good he really is.”

Generally speaking, Jackson doesn’t appear to be particularly formidable, at least not on the surface. He’s only 6’3 and maybe 200 pounds, but he really has come along since being traded from the Oklahoma City Thunder before the deadline and has been thriving for his new team under head coach Stan Van Gundy.

How Top Seeds Have Fared In NBA Playoffs

Each year, we see teams dominate during the regular season. This season has been no different. The Warriors have thrived under first-year coach Steve Kerr and been the best team in the NBA. In the East, the Hawks have vaulted themselves to the top of the conference by playing tough defense and relying on team-first concepts on the offensive end. While Cleveland has come on strong as the season has progressed, the Hawks have a firm grip on the top seed in the East. Having the number one seed is certainly beneficial, but it’s no guarantee of a deep playoff run. With that in mind, let’s take a look at how the top seeds have fared over the last 10 years.

A lot has changed for the Miami HEAT in 12 months. Around this time last year, the franchise was one of the NBA’s elite teams, preparing for their fourth consecutive NBA Finals run and eyeing a three-peat.

Now, Miami is just fighting to make the playoffs in the weak Eastern Conference. Dwyane Wade has been his dominant self when healthy, but the supporting cast around him is much different. LeBron James obviously left for the Cleveland Cavaliers, Chris Bosh is out for the year with a pulmonary embolism and veterans like Ray Allen, Shane Battier, Rashard Lewis, Greg Oden and Roger Mason Jr. are no longer in the NBA.

Who To Draft Number One Overall?

In a typical NBA draft year, there are one or two clear cut candidates for the top overall pick and a couple of fringe prospects that are more likely to fall into place after the top prospects are off the board. This year, Duke’s Jahlil Okafor has been the darling of college basketball and for most of the year it’s seemed that he was the clear cut guy to go number one and others were jockeying for second place.

However, as the Final Four in college basketball is now set and more and more focus in the NBA is going to shift toward the draft, who goes number one overall may be up for more debate than initially thought. Four players have emerged as top overall pick prospects, with two others almost being neck and neck, much as we saw last year with Andrew Wiggins, the eventual top pick, and Jabari Parker, the eventual second overall selection.

Here are the four to know, and two of them are still playing.

Be respectful. Speak when spoken to. Don’t get out of line. There are ways to act around Kevin Garnett that are simply understood by rookies when they enter the NBA.

Lester Hudson knew this when he was drafted by the Boston Celtics in 2009. As the only rookie on a veteran team at the start of the season, he took the quiet approach, listening intently and following protocol. Garnett, who can take time to warm up to first-year players, noticed.

Unexpectedly to Hudson, a reserved guard out of the University of Tennessee at Martin who rarely played, Garnett began speaking to him more frequently. The future Hall of Famer delivered advice, offered motivational messages and urged Hudson to continue improving his game. Hudson surmises Garnett liked that he worked hard and didn’t talk too much, similar to how Garnett approaches his tasks at hand.

The Charlotte Hornets (31-42) are fighting for their playoff lives, currently two games behind the Brooklyn Nets for the eighth and final seed in the Eastern Conference. But Charlotte wasn’t supposed to be in this position, returning their core group after becoming one of the league’s surprises in 2014.

The Hornets had larger aspirations and all of the momentum from the city in their pocket after an offseason rebranding campaign. The buzz was supposedly back in the Queen City.

Adding to the excitement surrounding Charlotte was marquee free agent signee Lance Stephenson. The versatile forward was fresh off a near All-Star caliber campaign in Indiana and the Hornets thought they had a steal getting him on a three-year, $27 million deal.

Moving on Without Patrick Beverley

On Tuesday morning, Houston Rockets point guard Patrick Beverley underwent surgery to repair a torn ligament in his left wrist. The injury will reportedly keep Beverley sidelined for roughly four months, which eliminates any chance of him returning for the upcoming playoffs.

Losing Beverley is a tough blow to the Rockets, especially at this point in the season where there is little the Rockets can do roster-wise to replace him. Beverley is known mostly for his tough perimeter defense and overall competitiveness. Beverley doesn’t put up huge box score numbers (10.1 points, 4.2 rebounds and 3.4 assists per game), but his energy and commitment to locking down opponents are, at least according to the eye-test, an important component of Houston’s defense.

So how do the Rockets fare moving forward without Beverley?

Buckle up NBA fans, it’s going to be a bumpy ride for our beloved sport.

Back in October, it was announced that ESPN/ABC and Turner Sports had agreed to pay a whopping $24 billion for the right to broadcast NBA games beginning with the 2016-17 season and running through 2024-25.

The odds of a work stoppage in 2017, which seemed probable even before this new TV deal was secured, unfortunately have likely increased. The current collective bargaining agreement runs through the end of 2020-21 season, but each side can opt up by mid-December of 2016. Both the owners and the players are now incentivized to opt out. Looking down the road, we could be staring down the barrel of another lockout in the summer of 2017.

It can sometimes take an entire career for a professional basketball player to stamp his imprint on the heart of a franchise. In most cases, life-lasting fame often requires winning championships.

Whether it’s in the NBA or overseas, only an exclusive group of individuals achieve such stardom.

To name a few: Michael Jordan with the Chicago Bulls, Larry Bird with the Boston Celtics and Kobe Bryant with the Los Angeles Lakers in the NBA; Dimitris Diamantidis with Panathinaikos, Juan Carlos Navarro with Barcelona and Derrick Sharp with Maccabi in Europe.

For 6’8, New-York-born power forward Jamel McLean, it took one shot. Not a championship. Not a state-cup. Not an MVP award. Not even a regular season game. It took just one shot during a meaningless preseason game.

Last year around this time, I debuted the maiden version of my top-10 players in the NBA. At that point, the top tier clearly consisted of only two players, LeBron James and Kevin Durant. While Durant would go on to win the MVP, most at that time felt James was the clear best player in the league.

What a difference a year later. Seven of the 14 players in the top four tiers (including honorable mentions) have completely dropped off the list.  Of those, five have been felled by injuries.  What’s more, nobody has been as good this year as James and Durant a year ago.

Over the years in any sport, a number of misconceptions arise in the prevailing consciousness. Many are due simply to changing tactics and schemes within a given game, or rule alterations that impact play in ways it takes the public time to catch up with. Some are the result of a lack of information, and further still are mostly due to something of an anecdotal syndrome – that is, a person or group of people perceived as knowledgeable at some point in time made a generalization on a particular subject that stuck, no matter how antiquated it eventually became. Phrases such as the team with the best player always wins a seven-game series or never steal a base with two outs, plus many others of their ilk, are little more than outdated generalizations that fail to adequately incorporate all the relevant context, but are often accepted into a sport’s lexicon simply because they’ve been repeated so often.