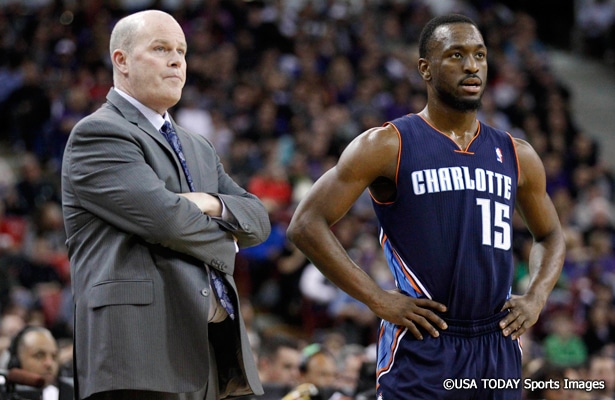 He spoke sternly because he knew the player was capable of better. He let his dissatisfaction be known because he recognized the potential of the 23-year-old to be a leader on a playoff-contending team. He delivered criticism because he cared.

During an early-season game against the Atlanta Hawks, Charlotte Bobcats head coach Steve Clifford had seen enough of Kemba Walker’s defense of Jeff Teague – or lack thereof. Walker was lagging on the pick-and-roll, Teague was making plays at will.

Clifford and Walker had established a solid relationship shortly after Clifford was hired last offseason. The third-year guard jelled with the first-year coach, who he described as a “real down-to-earth, cool guy.” Walker saw another side of Clifford during that game, though, one that said more than the words he spoke.

“He really surprised me and he got into me. I really deserved it,” Walker told Basketball Insiders. “It motivated me and it helped me. … That’s kind of the first time an NBA coach has gotten into me. It was a mixture [of yelling and speaking]. It showed me that he cared about me because if he didn’t say anything, then I’m like he doesn’t care. But it showed me that he knows that I can do more. Looking back, I appreciate it.”

He added, “I think it definitely was (a turning point).”

This season, Walker has been a leader on the Bobcats, who have doubled their win total from last season and are playoff-bound for the second time in franchise history. As one of three team captains, along with Al Jefferson and Gerald Henderson, Walker was held to a high standard by Clifford from the very start. Whether it was in training camp, halfway through the season or in the playoffs, Clifford was going to stay on Walker to keep pushing him to improve.

Months after it was played, Clifford remembered the Hawks game clearly. Not so much for Walker’s missteps, but for his receptiveness to the criticism.

“He’s a great competitor. The game’s important to him and he puts a lot into it,” Clifford said. “He wants to be coached. He takes a lot of pride in playing well, and it’s very important to him that he continues to improve at both ends of the floor. That’s why he has a chance to keep getting better.”

Walker is averaging 17.6 points, 6.1 assists and 4.2 rebounds per game, yet he knew this year would be about far more than offensive production. Clifford made it clear early on he wanted to see Walker improve on the defensive end. He called Walker into his office to watch game film, pointing out clips where he played good defense and others where he was inconsistent.

“He’s made me a better player because he has so much confidence in me,” Walker said. “He told me that I could be a much better defensive player if I wanted to be. He challenged me with that.”

Walker accepted the task, not for just himself but also for the team. He had played under Jim Calhoun at the University of Connecticut, and it hadn’t been since then that another coach had been so tough on him, tough because he was invested in Walker.

There are plenty of moments that go on between a player and coach that are not seen in practice or in games. Those are the instances that stand out to Walker this season – the conversations he has shared with Clifford, the times he has gone to him for advice, sometimes just as someone to listen.

“When a coach is able to help you with things off the court, that’s a lot more important than being on the court,” said Walker. “We’re all pros, but we still have problems just like regular people. Sometimes we need to vent, sometimes we need people to talk to. When you’ve got a guy like Coach Clifford whose been through so much in his life, a guy who knows things, can give you advice and you can talk to him, that helps a lot.”

The appreciation is mutual. Walker’s embrace of Clifford’s coaching has spread throughout the team and helped him be so effective in his first season at the helm. After years of sub-par performances, the Bobcats have bought into Clifford and are playing above-.500 basketball for the first time in five seasons.

“If you can coach the better players, then the other guys will let you coach them too,” Clifford said.

Walker listened loud and clear to Clifford during that early season game against the Hawks and haven’t stopped since. He follows his coach’s words not only because he has too – he wants to as well.

“When he cares so much about you off the court,” Walker said, “you want to do winning things for him on the court.”