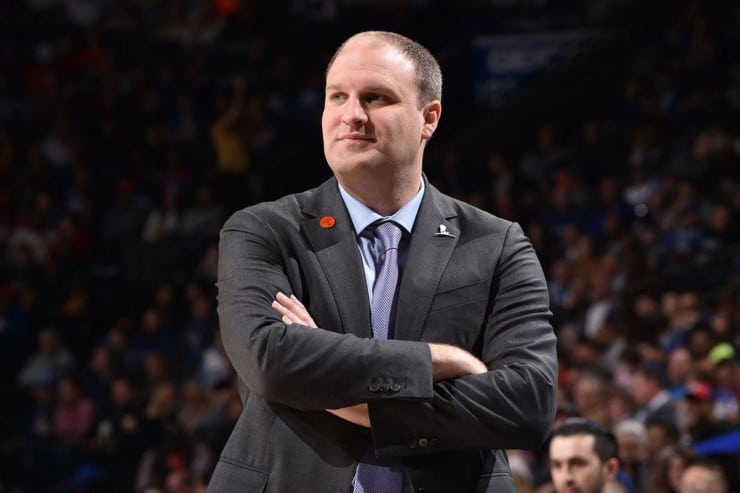 Every team has high expectations entering the season, only to see that bar lowered or raised as the weeks pass along. Just as a handful of teams fall flat on their face each year, there are those that surprise us all with their play on the floor. The same holds true this season as we inch closer to Christmas and the New Year.

Most of the awards for the regular season are tied to team success. One of the more obvious ones is Coach of the Year, as it rewards head coaches who maximize their roster and overcome obstacles to stand at or near the top of their respective conference standings. That doesn’t necessarily translate to playoff success though. Since the 1971-72 season, only two head coaches in the league have ever won Coach of the Year and the championship in the same season. You may have heard of these men, named Phil Jackson and Gregg Popovich.

Two of the last three recipients of this award have won the title at the end of the year but things are looking bleak for last year’s winner Tom Thibodeau. There has never been a back-to-back winner of this award, and the Knicks are struggling right now in the stacked Eastern Conference.

Seven of the last eight COY winners finished top-six in defensive rating and three of the last five did it in their first year on the job. The Hawks have won this award more than any other team (six times) while the Clippers, Nets, and Timberwolves have never won it. With all of that being said, these are the five leading candidates right now to win the award this season.

Last season Golden State finished 8th in the Western Conference but failed to advance to the playoffs when they were eliminated by the Grizzlies in the play-in game. To say that this team was motivated coming into this year would be a massive understatement. After missing the postseason for two consecutive years following a five-year run to the NBA Finals, the Warriors are back to being the Warriors. Depth was Golden State’s biggest problem last season, and ironically, they have turned it into their greatest strength this year.

"If you can’t maintain your culture during the down times, then you don’t really have a culture. It’s just dependent on winning. The culture has to survive losing stretches." – Steve Kerr

Through player development and a few on-court adjustments, the Warriors have cruised to a league-leading 19-4 record. Credit for the career turnaround of Andrew Wiggins should also go to Kerr. The fact that he has his team playing this well so early in the season even without Klay Thompson, James Wiseman, and their two talented rookies (Jonathan Kuminga, Moses Moody) should send a strong signal to the rest of the league. Kerr gives his guys a lot of freedom, and he is one of the best in the league in terms of the relationship he has with his players.

The arrival of Chris Paul last season was obviously a major addition to this team, but it also signaled the belief and faith that he has in his former coach in New Orleans. Leading the franchise to their first playoff birth in a decade was not enough for Williams. The veteran coach took them all the way to the Finals, but injuries and a lack of interior depth were just too much to overcome. Phoenix has addressed those concerns and looks to be even stronger than last season.

"Did a really good job of keeping me even." Landry Shamet on working with Monty Williams his rookie year in Philadelphia. #Suns pic.twitter.com/8DPL3u29wA

Williams has guided this team to a 20-4 record, which includes their historic 18-game winning streak. Much like Golden State, the Suns have done a great job with player development as guys like Mikal Bridges and Cameron Johnson have continued to get better. This group now has some much-needed experience to go along with their already talented roster.

The Bulls may have won the offseason with the addition of their trio of guards but not everyone was on board after the moves. Those who doubted this team claimed that DeMar DeRozan was “washed” and that a lack of defense would be Chicago’s downfall. Now one-quarter into the season, the Bulls are 2nd in the East and have the most wins in the conference. They also have one of the most lethal scoring duos in the league, although that will be put on hiatus for a short time.

Chicago Bulls star DeMar DeRozan has entered into the league's Covid-19 health and safety protocols, sources tell ESPN. DeRozan was the NBA's Player of the Week in the Eastern Conference, averaging 30 points in a 3-0 week.

Donovan has tasted success in Oklahoma City but this second act in the Windy City is different. One of the more underrated coaches in the league, he has this team playing well despite losing one of their starters for the season. The Bulls rank top ten in both offense and defense, while also boasting the 6th-best defensive rating in the league. In terms of turnaround teams, it doesn’t get any better than this situation.

Cleveland was expected to be at or near the bottom of the East this season, but someone forgot to tell Bickerstaff and his team. Now in his second full-time season as coach, Bickerstaff has this team way ahead of schedule. Instead of rebuilding and collecting losses, the Cavs have arguably been the best feel-good story of the season. They are currently a playoff team despite losing their starting point guard for the season, and many of their other key pieces for periods as well.

J.B. Bickerstaff reflects on what makes this @cavs team so special and what tonight's effort says about their collective character.#LetEmKnow pic.twitter.com/WMekGJGYnr

When the Cavs acquired Ricky Rubio, it did not make much sense. He has more than filled the void at the position, and Bickerstaff has used him to help develop the younger players. Cleveland saw their four-game winning streak snapped with a one-point loss to the Jazz, and nearly defeated the Bucks the very next night. Darius Garland and Jarrett Allen are having breakout seasons, and Bickerstaff’s unique big-man starting lineup of three seven-footers has been so much fun to watch. The future of this team is in good hands.

When Ja Morant went down with his knee injury, it appeared as though Memphis was in serious trouble. Jenkins has proven that this team is about more than just their star point guard, as they have now won five straight games since he went down. That includes the largest margin of victory (73 points) in NBA history. Several Grizzlies players have been out of the lineup with injuries, but Jenkins has just plugged guys in wherever they fit on the floor. This group is just relentless.

The Grizzlies have now gone 5 straight games without trailing at ANY point!

It's been 14 years since an NBA team put together a streak that long 🤯 pic.twitter.com/wMKJNU6KTl

Memphis has incredible depth because of its development program. Guys like Desmond Bane, De’Anthony Melton, and Tyus Jones have come a long way in their progression. Jenkins has also found a better way to utilize Jaren Jackson Jr now, which has been a tremendous help to their offense. Their next eight games are all ones they should be able to win, so keep an eye on this club. Despite the absence of Morant, Jenkins has guided this team to 4th in the Western Conference standings in his third season at the helm.