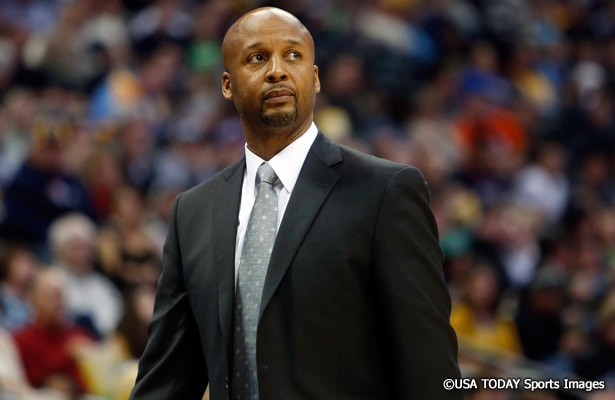 I often joke that there are two jobs that make a person age four years for every one lived. The first: President of the United States. The second: NBA head coach. If you don’t believe me, look no further than Denver Nuggets head coach Brian Shaw. Dude looks like he has a case of heartburn sitting on the bench that hasn’t remitted for nearly six weeks.

I love Shaw’s honesty. I love that he spoke with conviction on a local sports talk radio station in Denver and called out his team for not playing hard and generally behaving in a way that is unprofessional. I appreciate that he makes his players go back on to the team’s charter flight and clean the area where they were sitting rather than expecting a flight attendant to clean up after them. His old school approach strongly resonates with me personally.

Problem is, you just can’t do this with an NBA team in the year 2014. Well, unless you have more championship rings than fingers like Phil Jackson. Sure all of the Nuggets know that Shaw used to play the game, but that only goes so far. These are young men who have grown up in the age of entitlement and most make far more money than the head coach does. While Shaw is trying to teach lessons that it would behoove these young men to learn, the NBA is about winning and not teaching life lessons.

This is something that former Nuggets head coach George Karl learned through experience over the years. I remember numerous conversations with Karl where he emphasized that a coach could only call most players out a couple of times per season, and even that had to be done skillfully. I never got the sense Karl enjoyed that this was the case, but he sort of understood that is was the cost of doing business in the modern NBA.

Karl learned the most important truth of coaching NBA basketball: all players should not be treated equally. This is something I’ve written about before and I won’t belabor the point here. I was around a team daily that Karl coached with Allen Iverson, Carmelo Anthony, Kenyon Martin, Marcus Camby and J.R. Smith. Many people chastised Karl for not getting that team further in the playoffs. As someone close to the situation, I marveled at how he kept it from imploding on a daily basis being privy to incidents and behaviors that most fans were never made aware of.

For example, Iverson would show up hungover and/or a bit late to practice or shoot around way too frequently and Karl would rarely make a big deal out of this. Why? Because he understood the delicate psyche of Iverson and he knew that one misstep here could cause him to lose the team as a whole. It’s not that he ignored it, as I know he had one-on-one conversations and also had his assistants speak with him, but he didn’t put it on blast through the media.

Look, I don’t want this to come off as unabashed Karl worship nor do I wish for it to be a hatchet piece on Shaw. I actually like Shaw. I called for him to get the job in Denver and believe he will develop into a very good head coach. In fact, I like Shaw even more after hearing his honesty and his philosophies on basketball and life over the past week.

One of the biggest mistakes that rookie head coaches and general managers make is speaking too much to the media or being too honest about the wrong topics. Karl was widely known for being very honest in pre-game chats with local media members. However, he was only honest about certain topics. There were other topics that he didn’t discuss at all (and thus the media did know existed in most cases) knowing the damage that discussing these might have on the morale of the ballclub. Striking this balance generally afforded him good will with the media and also with his team. Of course, there have been players he killed in the media (see: Smith, J.R.), but that was strategic as he had no desire to continue coaching them.

I hate that we live in the time we do with regard to entitlement. I hate that we can’t be appropriately honest for fear that someone might be offended. I hate that many young people have a sense of entitlement that seems to be inflating by the day. However, this doesn’t change the fact that it is reality.

I feel Shaw’s frustration in my own context, and I’m sure some of you reading this do too.

NBA coaches may wish to try and change the young men they coach as people, and this is admirable. The only problem is this often takes energy away from coaching. While some may not wish to hear this, there have been and will continue to be people of questionable character on teams that win championships. Having a bunch of high-character people is in no way a prerequisite for winning. Said differently, there have been plenty of players who have not cleaned up after themselves on airplanes, not always listened to coaches, not treated others around them with respect and just generally behaved like arrogant jerks who have gone on to win championships. The job of the head coach in professional sport is to get the most out of this player toward the end of winning a championship and isn’t so much to fundamentally change the type of person that player is.

Acknowledging that we live in a culture of entitlement and finding a way to coach within it is far more efficient and feasible than trying to change the culture itself. This might initially feel like one is admitting defeat. However, failure to do so will often cost a coach his job before he really has time to understand why.

Dr. Travis Heath is a psychologist in private practice and an assistant professor of psychology at MSU Denver. He has served as a team consultant in the NBA. He also co-hosts a show on Mile High Sports Radio on Tuesday evenings from 6-7pm. You can follow him on Twitter @DrTravisHeath.