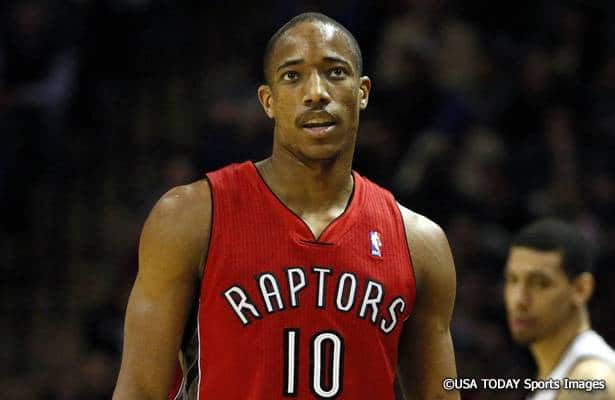 The Toronto Raptors find themselves in the Eastern Conference’s third seed entering the All-Star break, and shooting guard DeMar DeRozan is confident that they’ll stay there.

The 24-year-old, who was selected to his first All-Star game this season, believes that the Raptors are without question the third-best team in the East, behind only the Indiana Pacers and Miami HEAT.

“We proved it,” DeRozan told Basketball Insiders. “We beat Indiana. We went to the last couple of minutes in Miami all three times we played them. We feel like we can beat anybody.”

The Raptors entered the 2013-14 season in a five-year playoff drought, with a lot of uncertainty around the franchise. Toronto had brought in a new regime over the summer, hiring general manager Masai Ujiri last May with the hope that last season’s Executive of the Year could transform the Raptors into a playoff team. So far, they are on the right track. Toronto is 28-24 after finishing last season with a 34-48 record. Even though Ujiri has only been in charge for nine months, he already has the support of DeRozan.

“One thing about Masai is he’s smart; [he’s] one of the smartest GMs in the league and he proved that,” DeRozan said. “He knows what he’s doing. We put our trust in him and let him handle everything. He’s not going to steer us wrong in any sort of way.”

Ujiri’s biggest move came at the beginning of December, when he opted to trade Rudy Gay, Aaron Gray and Quincy Acy to the Sacramento Kings in exchange for Greivis Vasquez, Patrick Patterson, John Salmons and Chuck Hayes.

The Gay trade allowed DeRozan to take the next step in his development and he started to play at an All-Star level. In January, he averaged 23.5 points, 5.4 rebounds, 4.1 assists and 1.4 steals. In the first half of February, he has averaged 27.7 points, 5.8 assists, 4.3 rebounds and 1.3 steals. DeRozan is now Toronto’s go-to guy, and he’s finally started to realize his full potential. DeRozan isn’t the only player who benefited from the Gay trade. Terrence Ross has improved his scoring average by six points and Kyle Lowry is having his best year as a pro while putting up a career-high in points, assists, steals, three-point percentage and efficiency rating.

Now that the new players have settled in and everyone is on the same page, DeRozan says the most important thing is everybody wants to win. The team success is more important than individual success.

DeRozan admitted that he believes Toronto isn’t getting the respect they deserve yet, but said that the team is going out every night and working their butts off to change that.

“It’s not even [about] proving people wrong, it’s proving what we know we can do and let our game speak for itself,” DeRozan said.

DeRozan gives a ton of credit for the Raptors’ success to head coach Dwane Casey and his staff. Since the Gay trade, Casey has had to integrate new players, which is never easy to do midseason. DeRozan sees the terrific job the coaches have done, and calls them the unsung heroes of the team.

“The confidence they’ve had in us and the freedom that they give us on the offensive end, it let everybody blossom and let everybody have fun,” DeRozan said.

With less than a week to go until the trade deadline, DeRozan said the team isn’t worrying too much about what’s being said off of the court.

“We’re in a great position and we’re going to continue to take advantage of that,” said DeRozan, who also said he’s hopeful the team’s strong play will keep the group together as currently constructed past the trade deadline.

While the team is enjoying its successful run so far this season, DeRozan feels that the team will be able to compete at a high level for many years to come.

“Long-term that’s what we working for,” DeRozan said. “But we’re constantly focused on this year and finishing out these last 30 games.”