To many inside and outside the organization, the Oklahoma City Thunder’s acquisition of Enes Kanter from the Utah Jazz at the trade deadline was a peculiar move even as it happened. The particulars of what the Thunder sent in return aside, the team was acquiring an offense-first, defense-never big with a pedigree for starter-level minutes backed up by his own trade request out of Utah based partially on playing time. A guy whose primary offensive skills involve the ball in his hands appeared to be a strange fit from the jump with two of the league’s top offensive creators, Kevin Durant and Russell Westbrook, presumed to be on the floor at many of the same times.

For better or worse, Thunder GM Sam Presti doubled down over the offseason when he matched Portland’s four-year, $70 million offer sheet to keep the former third overall pick in town. Kanter will now be OKC’s third-highest paid player.

Billy Donovan’s hiring as the team’s new head coach came in between these two moves, and viewed as part of the same thought process, it doesn’t do much to simplify the situation. Kanter’s already-strange fit may have only been magnified, in fact, before the decision to retain him for such a huge number was made.

Donovan brings one of college’s more pro-oriented schemes to the table, one that should carry over in many respects and, with an exception or two, should fit the roster splendidly. His Florida teams have emphasized some of the NBA’s more modern principles for years – things like a quick tempo up the floor, a flow emphasis offensively anchored by the league’s preferred pick-and-roll foundation, and a healthy interplay between diagrammed sets and individual creative freedom within the scheme.

Kanter is a good fit for parts of this based on his skill set. He’s versatile as a roll man in two-man action, with enough elements to his game to keep teams from sitting on any preferred outcomes. His timing is good, and he’s talented enough to finish even when teams bring help over at the rim.

He can pick-and-pop effectively, with the midrange game to punish defenses for paying too much attention to OKC’s ball-handlers:

Kanter could stand to improve as a screener, often preferring to simply avoid the contact altogether and slip screens. This is a secondary issue when he shares the floor with Durant and Westbrook, though, who draw so much gravity on their own that it won’t even matter a lot of the time. Kanter runs the floor well enough to be an asset in transition, something Donovan emphasizes (he preached getting the ball across halfcourt in four seconds or less at Florida virtually no matter what).

There are numerous questions elsewhere, though, especially when considering Kanter’s own mental state and his presumed expectations for his role after seeing the Thunder invest so heavily in him. A major one is post play, where the big Turk and his new coach have diverged pretty heavily to this point.

Of 351 college programs tracked by Synergy Sports last season, 340 finished more plays from the post than Donovan’s Gators. Some of this was personnel – Florida has been more post-heavy in other seasons – but will the Thunder’s roster really dictate anything different? Kanter could see more looks during the periods he plays with bench-heavy units, but why would Donovan buck a tried-and-tested wing-oriented scheme featuring two of the world’s best scorers to dump the ball down to the block as anything more than a bailout option? A guy who begged out of Salt Lake City citing playing time and what he perceived as misuse of his talents could find that his new team doesn’t have much use for an area he prides himself in.

Kanter’s presence offensively, especially alongside OKC’s top talent, feels a bit like adding a turbocharger to an already-souped-up Lamborghini that still needs a steering wheel, radio and passenger seats installed – and using most of the owner’s remaining budget to do so. He does some good things and there will be times he adds some real oomph, but he’ll just as often simply be overlap with things the team already does well, or, in the case of his post game, things they really don’t need.

That’s without getting into Kanter’s defense, which is well-documented as among the worst in the league among rotation big men. Donovan’s incoming scheme, again pending big alterations, isn’t likely to help.

Donovan built his Gators defenses around extreme ball pressure. Florida was consistently among the top major Division I programs at forcing turnovers during his tenure, in large part due to the heavy traps and hedges he built into his scheme. Watch as his 2014-15 team faces several pick-and-rolls in succession, rebuffing each one through an aggressive high hedge from the big defender and eventually forcing a turnover:

Look how far Donovan’s big men are trapping opposing ball-handlers, cutting them off before they can round the corner and forcing them to either move the ball or reset: 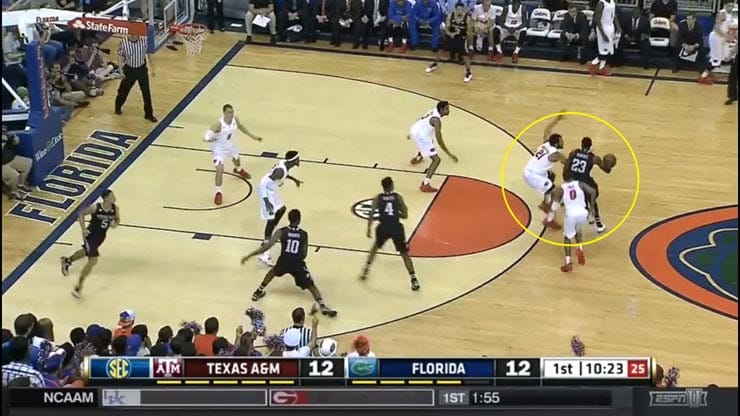 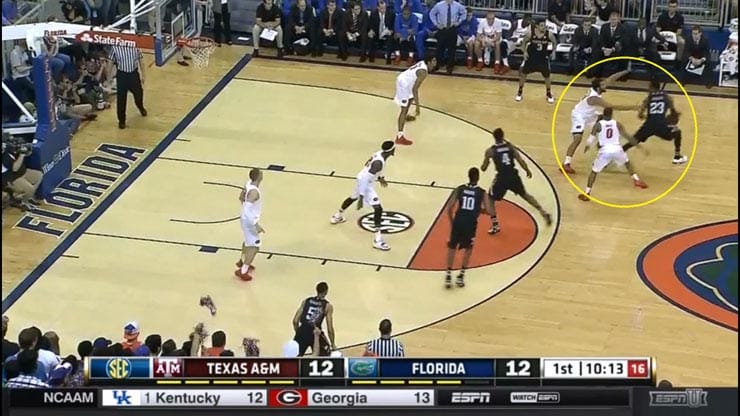 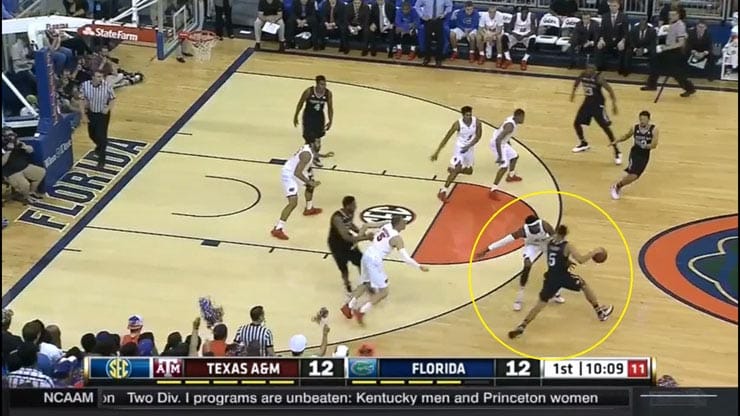 Kanter cannot do this at the NBA level. Former Jazz coach Ty Corbin tried a version that wasn’t even quite as aggressive as Donovan’s in his last season with the team; the results were predictably bad across the board for a group utterly lacking the personnel, but Kanter’s tape in particular ought to be burned to ash:

There’s no guarantee Donovan remains so attached to the scheme at the NBA level, but he’d be a fool to abandon it entirely for Kanter’s sake. There are few bigs in the game better suited to hedging high effectively than Serge Ibaka, and small lineups featuring him at center with Durant at power forward (units we should see more of under Donovan) should be every bit as aggressive as those Florida teams. Even Steven Adams and (especially) Mitch McGary will have much more success than Kanter, and such a scheme can be a jumping off point for OKC’s lethal transition attack with all the turnovers it forces.

Even if Donovan and his staff have the practice time to devote to drilling Kanter differently than several of his other bigs, the very best he can hope for is simply a moderate liability defensively – and even that might be pushing it. Kanter was dead last among centers last year in ESPN’s Defensive Real Plus-Minus statistic, which accounts for both teammate and opponent quality to paint a more contextualized picture of a player’s impact.

Even Ibaka’s presence alongside him did basically nothing to ease the damage. OKC’s 110.8 per-100-possession defensive figure while Kanter played without Ibaka would have been worst in the league over the full season; their 109.2 mark when Ibaka played next to him would have been mere decimals stingier than Minnesota’s NBA-worst group. When Ibaka played without Kanter, meanwhile, the Thunder were right at their season-long, roughly league-average mark of 103.2.

It’s fair to speculate whether this was an optimal target for the Thunder from the start, especially with guys like Adams and McGary more than capable of quality minutes as the sort of complementary pieces OKC needs around Durant, Westbrook and Ibaka. There’s no way of knowing for sure if Presti and his team thought they could retain Kanter on a more team-friendly deal, but they boxed themselves into a place with few positive outcomes by trading for a guy with a demonstrably different view of himself than most impartial observers.

How Donovan handles things if Kanter’s performance is more of the same is just one of several fascinating subplots in Oklahoma City this year. How does he deal with minute distributions if one or both of Adams or McGary is clearly a better option? How will Kanter, clearly unafraid of voicing displeasure with his organization through the press, react if he doesn’t start or is perhaps relegated to third or even fourth big duties as the team soars without him? Will Presti and team brass, surely wary of the egg on their collective faces from the James Harden trade and other missteps these last few years, sit idly by while their $17.5 million man languishes in a limited role?

Maybe things change. Maybe a re-energized Kanter puts his more selfish tendencies aside and dedicates himself to plugging the holes in his game like he never has before. Maybe Donovan is the guy who gets it all to make sense like no other coach in Kanter’s career thus far has been able to.

Either way, Kanter is just another reason this Thunder team will be appointment viewing this year. The big man is locked in as a franchise centerpiece for better or worse, and now begins the process of determining the success of the move.