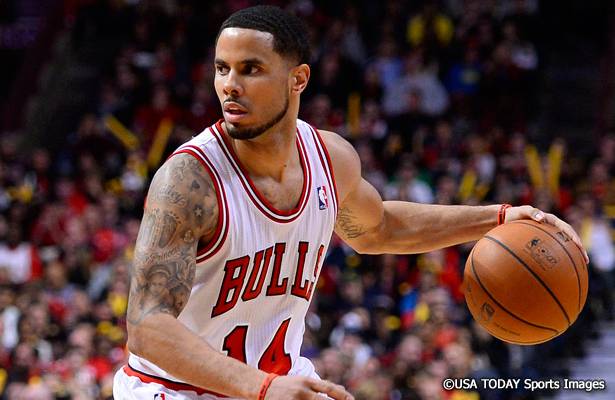 It’s close to the halfway mark in a long 82-game NBA season; so barring injuries or unexpected trades – maybe a few other variables – fantasy basketball owners know what kind of team they have by now.  Devoted owners are always looking ahead to the playoff rounds and wondering if their team is good enough to carry them all the way.  If that answer is unclear, it’s probably time to carefully analyze the waiver wire for gems.

Basketball Insiders is here to help you out in your waiver wire endeavors.  We’ve compiled a list of players who are showing signs of real improvement and just may be available in your league.  We suggest you find out sooner rather than later.

Be advised that when we talk fantasy, it is based on nine-category fantasy scoring leagues that account for points, assists, rebounds, steals, blocks, three-pointers made, turnovers, field goal percentage and free throw percentage. (Note – all stats reflect games played through 1/14/14)

D.J. AUGUSTIN (Chicago Bulls)
The Bulls acquired D.J. Augustin in mid-December in the wake of the Derrick Rose loss.  The Toronto Raptors had waived Augustin as part of a four-player acquisition deal, so the timing was right for Chicago to add him as a backup point guard to Kirk Hinrich.  This is Augustin’s fourth team in six years, but he just may have found a home. Augustin seems to have immediately clicked with this team.   Since donning a Bulls uniform, he’s averaged 10.3 points per game, 6.2 assists, 1.5 three-pointers (at .343 percentage) and has gone 35-of-38 at the free throw line in nearly 29 minutes of play.  These numbers even take into account his woeful start in the first two games.  A quick look at his 10 games in Toronto before the move (2.1. points, 1.0 assists in 8.2 minutes), and one can easily spot the reason why collective heads are turning and why home fans are giving Augustin standing ovations.  Another reason fantasy owners should take note?  Hinrich’s name is often linked to possible trade scenarios.  In the event that Hinrich is moved prior to the February 20th trade deadline, the Bulls will rely on Augustin even more.  In the three games in which he started, he averaged 13.7 points, 8.0 assists and 3.0 three-pointers at .529.

IMAN SHUMPERT (New York Knicks)
J.R. Smith’s recent antics and dismal shooting have cleared the way for Iman Shumpert.  Knicks’ coach Mike Woodson seems to have reached his limit with Smith, so Shumpert is getting more minutes.  Fortunately, he’s answering the call in a far better way than his start to the season.  In the first 30 games (from the start of the season until the end of 2013), Shumpert averaged  6.2 points per game, 1.9 assists, 4.7 rebounds and .83 three-pointers in 27.02 minutes.  Now compare that to eight games in January thus far: 12.1 points, 2.4 assists, 6.3 rebounds, 2.6 three-pointers at .436 percentage in 33.8 minutes.  He’s shooting .473 in field goal percentage and grabbing 1.9 steals per game.  Shumpert’s numbers plummeted a bit in the most recent few games, but with Smith’s recent benching and possible trade bait situation, he should continue getting an opportunity to shine.

GERALD GREEN (Phoenix Suns)
Speaking of opportunity, Gerald Green’s role, hence minutes, are increasing as a result of Eric Bledsoe’s unfortunate knee injury (torn lateral meniscus).  Bledsoe had surgery on January 10th, and the Suns say he could possibly return in the second half of the season.  It doesn’t exactly sound like a sure thing.  Green doesn’t contribute in every category, but if you need three-pointers and steals, make sure he’s not languishing on the waiver wire.  He’s in the starting lineup and has logged double-digit scoring in five of the past seven games.  Be aware Green will have off-nights in shooting percentages.  When he does, he seems to contribute fairly well in other categories.  And he keeps turnovers to a minimum.

KRIS HUMPHRIES (Boston Celtics)
After a particularly slow start to the season (and limited playing time), Humphries seems to be finding a niche in Boston.  He’s appeared in the starting lineup in the past four games, averaging 9.0 points, 9.5 rebounds, 2.0 assists, 1.0 steal and 2.3 blocks in 29.04 minutes.  Coach Brad Stevens is still playing around with frontcourt rotations and minutes, but if Humphries can sustain this level of production, he may have a chance of edging out Jared Sullinger.

C.J. MILES (Cleveland Cavaliers)
Fantasy owners have largely ignored C.J. Miles (only owned in 25 percent of Yahoo Sports’ leagues); we suggest you check out his numbers now.  Starting for the Cavaliers since mid-November, Miles has averaged 15.7 points per game over the past seven games in nearly 27 minutes.  He’s also averaged an outstanding 3.1 three-pointers at .638 percentage, 3.6 rebounds and 1.4 steals.  Not only that, but his field goal shooting is .551.  He’s doing what fantasy owners want: contributing in categories across the board.  He had a five-point game in his last outing – we’re calling it a fluke.

Mo Williams (Portland Trail Blazers) – Now in his 11th year in the league, Mo Williams doesn’t post numbers like he did in the old days, but don’t overlook what he’s doing in Portland off the bench.  In the past five games, he’s averaging 12.6 points, 5.8 assists, 1.3 assists and 2.2 three-pointers   Solid numbers for those hard-to-find guards on the waiver wire.

Randy Foye (Denver Nuggets) – Is Randy Foye’s slump over?  Consistency from now on?  Hard to say, but his numbers are encouraging.  He’s dropped double-digit scoring over the past nine games (15.3 ppg), along with 3.4 assists, 3.6 rebounds, 2.4 three-pointers and 20-of-23 at the foul line.

Patrick Patterson (Toronto Raptors) – Patrick Patterson is loving his new life in Toronto and his coach, Dwane Casey, says he’s a perfect fit.  Looks like a win-win situation.  In just 22.1 minutes, he’s averaged 9.6 points and 4.6 rebounds in 16 games with the Raptors.  However, in the past six games, those numbers have jumped to 14.8 points and 6.0 rebounds.  Tyler Hansbrough’s return is a threat, but maybe not a strong one.

Now we want to know, who are your waiver wire favorites at this point in the season?  Tell us in the comments section below.