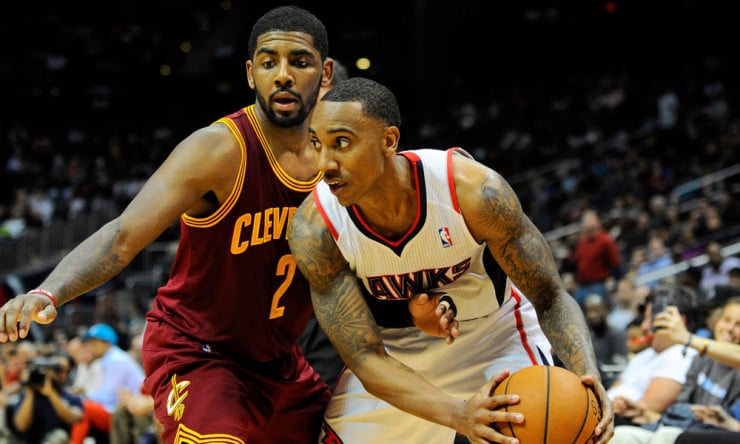 It surprisingly took 12 games, but the Atlanta Hawks punched their ticket to the Eastern Conference Finals after encountering plenty of turbulence in series wins over the Brooklyn Nets and Washington Wizards. But after a regular season that led to honors like four All-Star selections and the league’s Coach of the Year award, this is exactly where the Hawks expected to be – in a position to make a Finals appearance.

The Conference Finals contains plenty of star power with Golden State’s Stephen Curry, Houston’s James Harden and Cleveland’s LeBron James. Although the Hawks have four All-Stars, the team doesn’t have an elite talent on the same level as Curry, Harden or James and it’s the prime reason the franchise doesn’t get much in the way of mainstream respect.

But the Hawks have been unashamed about their philosophy of sharing the wealth in becoming one of the league’s most offensively efficient squads. Atlanta won the regular season series versus Cleveland 3-1, but the Cavaliers went through a complete roster transformation in the middle of the campaign, which nullifies this stat.

The Hawks will need shooting guard Kyle Korver to snap out of his playoff funk as the veteran is shooting just 39 percent from the field and 35 percent from three-point range. In Korver’s last four playoff games, he’s scored a combined total of 17 points.

However, point guard Jeff Teague is the team’s catalyst. While Teague has been up and down throughout the playoffs up until this point, the guard is averaging 20 points and six assists in his last three contests coming into the Eastern Conference Finals.

Al Horford, DeMarre Carroll and Paul Millsap round out Atlanta’s starting lineup and all three players have been solid, with Carroll leading the team in scoring (17.1 points per game) during the playoffs.

What a turn of events for the Cleveland Cavaliers. The franchise won a grand total of 57 games the past two seasons, but reeled off 53 wins in 2015 to make their first playoff appearance since the 2010 campaign.

All of this recent success is primarily driven by the return of the King, LeBron James.

While the Hawks have pretty much run roughshod on the league since the start of the season, the Cavaliers were mainly a work in progress for the first half of the campaign. In-season trades to bring in rotation players Iman Shumpert, J.R. Smith and Timofey Mozgov helped spark the unit and contributed to securing a No. 2 seed entering the playoffs.

However, the Cavaliers enter the Eastern Conference Finals resembling a mash unit. All-Star forward Kevin Love was lost in the first round and has been ruled out for the rest of the playoffs. All-Star guard Kyrie Irving is battling nagging knee and foot injuries and has been held under 13 points in three of this last four playoff appearances.

But despite the injuries to James’ top two sidekicks, the Cavaliers keep on pushing. James is averaging 26.5 points, 10 rebounds and 7.9 assists during this year’s playoffs. While James’ numbers are off the charts, his shooting touch has been erratic in the postseason – 42 percent from the floor and 15 percent from three-point range.

One of the main Cavaliers to watch will be forward Tristan Thompson and his matchup versus Hawks All-Star Paul Millsap. In the Eastern Conference Semifinals, Thompson frustrated the Chicago Bulls’ frontline by averaging 11.2 rebounds. Thompson’s work specifically on the offensive glass, four per contest in the series, was a pure display of tenacity and relentlessness.

The greatness of LeBron James is the reason why the Cavaliers are even in this position after a woeful start to the regular season and a playoff campaign riddled with injuries. On paper the Cavaliers are the inferior team, but games aren’t played on loose leaf.

Still, expect the Hawks to strike first in Game 1 at home in front of a Philips Arena crowd that’s been waiting on this moment on the national stage for years.