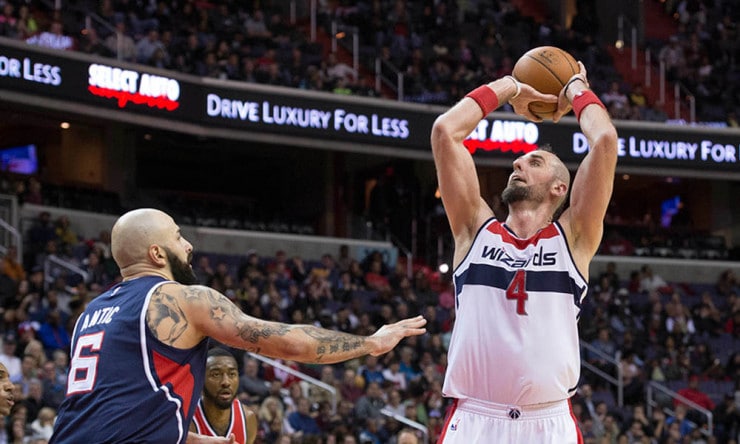 Are you a glass half empty or a glass half full type of person? Your answer to this question will likely determine how you currently view the Atlanta Hawks’ situation, down 2-1 in their Eastern Conference Semifinal tilt against the Washington Wizards.

If you’re a glass half full type then you’ll feel confident the Hawks are in a good spot after overcoming a 19-point deficit in the fourth quarter in which the team tied the game with under a minute to play before succumbing to a buzzer beater at the hands of former All-Star Paul Pierce.

If you’re a glass half empty type then you’ll likely be feeling worried the Hawks even found themselves on the ropes against a Wizards team without point guard John Wall, their best player, who is likely done for the series because of an injured hand.

Neither viewpoint is clearly right or wrong, but one thing for certain is the Hawks squandered a prime opportunity to apply maximum pressure to a Washington franchise struggling to adjust, mentally and physically, without Wall in the lineup.

The Hawks just didn’t get it done on Saturday. They were out-shot, out-rebounded and out-assisted in Game 3, but almost pulled off an incredible comeback. The Hawks’ bench, led by guard Dennis Schröder, was instrumental in Atlanta’s fourth quarter charge to tie a game thought to be a blowout just a few minutes prior.

There are reasons for Hawks faithful to feel both optimistic and pessimistic moving forward.

We can also play the glass half empty or half full game with the Washington Wizards as well. Are you impressed the Wizards rolled to a 19-point lead entering the fourth quarter despite not having Wall in the lineup and instead roaming the sidelines in a suit? Or are you more concerned the Wizards gave up that same plush lead and needed a step back 20-footer from Pierce, over two defenders, at the buzzer to pull out a Game 3 victory?

Once again, there is no clear answer and there’s plenty of basketball left to be played in the series.

Still most wouldn’t expect the Wizards to be in the driver’s seat in a series where Wall has played a grand total of 39 minutes after three games. Credit must be paid to the play of unheralded guys such as Ramon Sessions, Otto Porter, Jr., and Drew Gooden for providing consistent production in their respective roles. Porter, for instance, is averaging 14 points, nine rebounds and a steal for the series, while Sessions has played admirably since stepping into the starting lineup for Wall.

The Wizards are in the driver’s seat and there’s still a chance, albeit a slim one, that Wall may be available at some point this series. As of now, the Wizards are more than holding their own in his absence and have an opportunity in Game 4 to push the top seeded Hawks closer to the brink of elimination.

Who will win Game 4?

The Atlanta Hawks are up against it. The franchise finds itself on the ropes and in serious trouble and have to play against a Wizards team full of confidence on the road in Game 4. The Wizards, on the other hand, just have to play .500 ball in the series’ next four games to emerge as the winner and head to the Eastern Conference Finals.

Look for the Hawks to come out in Game 4 looking to restore order and overcome whatever haymakers Washington heaves at them.