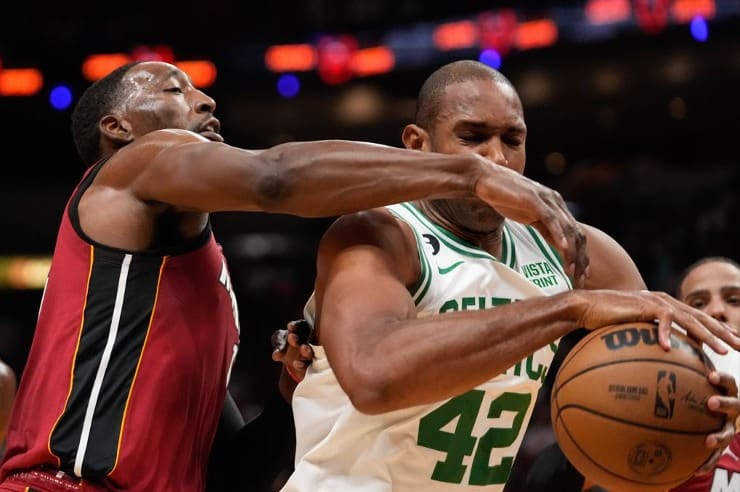 Miami Heat center Bam Adebayo was quick to downplay the significance of his team’s rivalry with the Boston Celtics on Friday night. After losing 111-104 against the Celtics, the Heat dropped to 0-2 for the first time since the 2007-08 season.

Following the loss at FTX Arena, Adebayo gave his take on the Celtics-Heat matchups. “Game by game, man. Take it game, by game. Opponents are going to be opponents. But at the end of the day, we want to win every game.”

According to a few NBA betting sites, the Heat have the 10th-best odds to win the championship in 2023. Although, sportsbooks are aware that this is Miami’s first 0-2 start in the Erik Spoelstra era.

Bam made his first 6 shots, now 6/7 at the break 💥 pic.twitter.com/dEPJxeccGO

“That’s the mindset,” continued Bam Adebayo. Obviously, the history between us, there’s a little dogfight in that. But other than that, just a game-by-game mentality.”

Based on a total of 130 regular season games, the Celtics have a 79-51 all-time record against the Heat. Last season, Boston finished 2-1 against Miami during the regular season.

Furthermore, Bam Adebayo ended his performance on Friday night with 19 points, 8 rebounds, and 5 assists in 35 minutes played. He shot 8-of-11 from the field. In the opening quarter, Boston outscored Miami 30-22.

Defensively, the center felt disappointed in his team’s overall effort. “It’s not our offense,” Adebayo added. “I feel like 104 points can win a game. It’s the other end we’ve got to lock in on.”

Adebayo’s fourth foul and technical foul led to a momentum shift. Both teams went on a 20-6 run. But Miami failed to keep up with Boston.

There's the Bam we know 💥 3/3 FGM early on pic.twitter.com/eUc3WMFWxu

Tyler Herro led the Heat in scoring with 25 points in 36 minutes of action. He finished 10-of-21 shooting from the field and 2-of-6 from 3-point range.

Meanwhile, Celtics players Jayson Tatum and Jaylen Brown combined for 57 points against the Heat. “We’ve got a great team and we’re still trying to figure each other out,” said Tatum during the postgame interview.

“And I love playing against the Heat. We’ve got some history here the last couple years, and they push you. They make you a better team. They’ve got a lot of fire, a lot of great players, a great coach.”

Tatum and Brown became the second Celtics duo in franchise history to score 25 points in each of their first two games to start a season. They joined Robert Parish and Larry Bird (1984-85 season).